Visiting North Argentina is always wanting to come back. We tell you the secret that makes that happen. 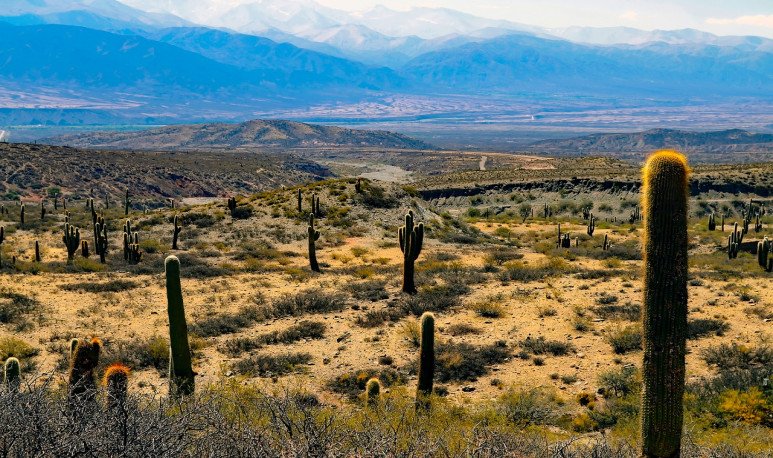 In  Northern Argentina  ,  gastronomy  is the result of a long network of cultures and styles. On the one hand, it is part of a millennial tradition, a legacy of recipes from old grandmothers and mothers, which continue to be emulated by the laborious hands of today's ones, proposing authentic homemade dishes. On the other hand, to these original elaborations today are added colonial and immigratory influences, delivering enhanced flavors, textures and aromas. Finally, we must add the modernity of restaurants and confectioneries that choose industrialized cuisines, but that never cease to apply the idiosyncrasy of North, with ingredients to their right extent and the necessary hint of love for cooking. So, with family or friends, in the middle of a walk or on an extensive evening under the stars, northern cuisine is always a reason for celebration. The fire crackles and the scent comes out of the ovens as the ringing of a bass drum and the strumming of a guitar begins to sound. Clear pre-announcements of a panzada of regional delicacies.

The mother of all flavors

Empanadas are typical of all Argentina, but in North Argentina their preparation reaches its maximum expression, always making the variety of meat cut by knife as victorious. Thus, each province rivals friendly and culinary to boast of producing  the best empanadas in the country .  Fried or baked , usually small and delicate, northern empanadas are a mandatory delight at the pace of the traveller. And they can be tasted both in an elegant gastronomic establishment, or placed in the small window of a house whose inhabitants have decided to sell them home. Another aspect is also enshrined in this healthy competition: juiciness. Here everyone aspires to the throne, showing animals fed with natural pastures, grace that will later serve to entertain our palates.

Of course, fillers have their particularities. In  Santiago del Estero  they usually apply chili del monte and paprika among spices, while in  Salta  the potato is a fundamental ingredient. The tucumana variety has found an ally in the green onion and the Riojanos have the possibility to include the best olives. In Tucuman there is even  the  Empanada Route , with more than 50 gastronomic establishments in San Miguel, Yerba Buena and Famaillá, which is declared as the National Capital of that food. In September the National Empanada Festival is held. In that event, the national champion is dedicated. In addition to the taste the juries have in consideration the ingredients, the size and even the amount of repulgues of the dough.

The Argentinian North is a prodigy of products of the earth. These foods have been used since time immemorial and the recipes have been added to contemporary influences. That is why today the aromas and flavors of raw materials continue to be rediscovered, with new dishes that enhance the organic and merge with current techniques to give rise to a cuisine that has become known as  “Novo andina”.  But if we talk about the traditional, we talk about corn. Its most recognized culinary expression is reflected in the unctuousness of humita, a fresh choclo paste wrapped in its shawl; but it also stands out in tamales, based on corn flour paste and anco zapallo with meat and seasonings; as well as in locro, accompanied by various stew meats.

However, there is also the alcoholic version of this grain, the famous chicha, which results from the fermentation of maize in sugary water. Following the hot meals, mention can be made of tortillas al rescoldo (made from the heat of ashes and embers), quinoa soup, charqui, carbonada (stew of meat and vegetables served in an oven-cooked zapallo) and the famous riojan pork costeletas. Flame meat is also widely used, so it is not unusual to find it in the form of an immense Neapolitan Milanese in a village of  Catamarca  or in a refined carpacho in a central restaurant in the city of Salta. In the case of  La Rioja , the highlight is for olives. Even the province has its own natural type, called Variedad Arauco. To this is added its main derivative, oil, produced and packaged in plants that use artisanal and industrial techniques.

The  Calchaquíes Valleys  cross much of the northern territory and therefore constitute an ideal setting for a large quality. Several provinces have taken advantage of this factor and, based on their specific routes, they position themselves as major exponents of the activity. Of course, many of the wineries offer guided tours and tastings to check in person whether the production processes have been applied correctly. In Salta, vine cultivation was introduced by the Jesuits in the 18th century, mainly in  Cafayate . There originates the torrontés strain, which over time has become the flagship white grape of our country. Its ripening is expressed in a white wine with intense aroma and fruity flavor. Today the vineyards stretch over almost two thousand hectares in the departments of Cafayate, San Carlos, Angastaco and Molinos.

Among the red strains, which occupy more than 55% of the total cultivated area, are Cabernet Sauvignon, Malbec, Tannat, Bonarda, Syrah, Barbera and Tempranillo. In addition to the privileged conditions of the terroir are technological innovation, dedication and knowledge of the producers. This is reflected in the  Cafayate Vine and Wine Museum , which offers a dynamic exhibition on the history and characteristics of the vineyards of the Calchaquíes Valley and their high altitude wines. This space aims to promote knowledge and exalt the senses through visual stimuli, sound and interactive installations.

On the other hand, in the northwest of  Tucumán  is the central area of the Calchaquíes Valleys and, therefore, its wine-growing area. Thus, with high sun exposure, natural guano fertilizers and abundance of thaw water for irrigation, the best vines in the province grow. Vineyards have been planted since the 16th century, but only since the end of the 19th century wines are produced for marketing, started mainly with the Creole chica variety. Thanks to irrigation channels and dams, from 1910 the area of vineyards was significantly expanded. Currently, the varieties implanted in Tucumán are Torrontés, Malbec, Cabernet Sauvignon, Bonarda, Syrah and Tannat.

In  La Rioja  , wine production also has a deep-rooted culture, dating back to 1600. In this sense, we highlight the area known as “La Costa”, north of the capital of Rioja, formed by a succession of small towns (Sanagasta, Huaco, Agua Blanca, Aminga, Anillaco, Los Molinos, Anjullón, San Pedro and Santa Vera Cruz) where the small family wineries have formed a tourist circuit. There are these producers of homemade wines, who make their work an experience to share with visitors and proudly point out that, despite the reputation of Salta, the strain of torrontés originates from Rioja soil.

To culminate a semblance of northern gastronomy, nothing like a good dessert, based on fruits of naturally intense flavors. A mention is given to the famous Rioja nuts, which are marketed with peel or only its pulp, although one of the most delicious ways to eat them is in candied version and with dulce de leche.

Finca Huayrapuca , in Famatina, is a real icon. Catamarca also produces candied nuts. While in Santiago del Estero they say that zapallos, watermelons and melons are tastier in their territory, in Salta they raise the flag of cayote sweets and fig snacks. But the production of regional sweets is much more extensive: mamón, blackberry, quince, sweet potato, Lenten peaches, zapallos in syrup and the famous arropes of tuna and chañar.

Tucumán, on the other hand, stands in the bastion of sugarcane and offers visitors its candies and sugar cane honey tablets. This is completed and accompanied by cheese and goat milk dulce, which is used in dumplings, snacks and alfajores. On this last preparation, there are many variants: stuffed with meringue, sweet nougat, glazed with sugar and almost always with a dried anise scented mass. Carob also brings to the culinary collection, through patay, a sweet cake made with its flour; while the mazamorra is the sweet version of the widely used white corn.

After so much mandibular hustle, the embers smoke timidly, the scents have dispersed in the sky and the guitars release their last chords. With hearts happy and imbued with the best of northern traditions, as you will not want to return.

We thank you for the material provided to the Argentine North