When the tremor passes, we will seek to have our trips include outdoor activities, meditation and physical exercise. We tell you what the Argentine North has to offer. 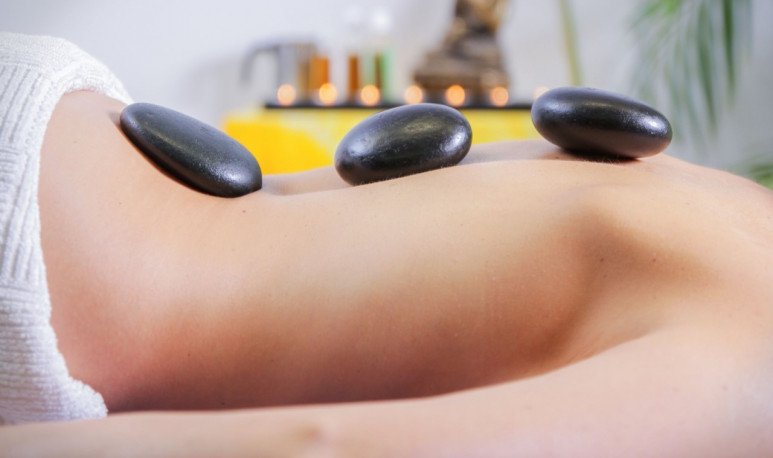 Whether in environments of valleys, mountain ranges, lush vegetation and even cities, the thermal offerings of the North of Argentina form a vigorous range. Santiago del Estero, Jujuy, Salta, Catamarca, La Rioja and Tucumán are ideal places to combine the therapeutic relaxation of the waters with overwhelming landscapes.

In the province of Santiago del Estero, 68 kilometers from its capital, there is a real thermal city:  Termas de Río Hondo . This territory benefits from 14 meso thermal springs, whose springs relieve and restore the health of the bodies thanks to their energetic properties. Formerly known as Yacu-Rupaj (“Aguas Calientes”), the hot springs were used since pre-Hispanic times by the Incas. Tourist activity in the destination began at the end of the 19th century, with the construction of the first accommodation establishment in 1884, but it was only in December 1956 that Termas de Río Hondo was recognized as a city. Over time, the enclave has developed to become a renowned spa centre worldwide. Currently travelers can discover the pleasure of the thermal bath in the different centers and even, and this is a peculiarity, in the same rooms of the hotels.

The waters arise at temperatures of 30°C to 65°C and their therapeutic uses include the improvement of the muscular and articular system. With the pleasant feeling of calm and relaxation offered by the thermal treatments, tourists can enjoy the many local attractions.

Just 19 km from San Salvador de Jujuy, the  Hotel Termas de Reyes  is a welcoming refuge to enjoy the main hot springs of Jujuy. Located on the slope of the Gorge de Reyes, whose rugged geography gives the site a particular beauty, the establishment can be experienced throughout the year; only that the landscape will mutate between the intense green of summer — the surrounding hills are covered with abundant vegetation.ndash; to the white of snow that usually covers this territory during the winter.

Here the use of the hot springs also dates back to Inca times: according to legend, the kings of that empire moved to this place to find in their sacred waters well-being and health for their bodies. Upon arrival, the Spanish conquistadors would take this fact as a reference and baptize the place as Termas de los Reyes.

The first attempts to exploit the hyperthermal waters in the area date back to the end of the 19th century, with very precarious facilities. Already in the 1930s the then governor of the province of Jujuy created the current hotel, opening in November 1938 under the name Gran Hotel Casino Termas de Reyes.

During the first Peronist government, the property functioned as a home-school and a recovery clinic for low-income children, but in 1958 it was reopened as a hotel. After passing through national, provincial and private concessions over many years, in 1999 a public tender awarded the operation to the company Las Almonas, which was responsible for the refurbishment and integral restructuring of the old building, which returned the ancient splendor.

Currently, the 4-star Termas de Reyes has 54 standard rooms, four suites and a presidential suite. It offers a swimming pool with thermal water and hydromassage, solarium, 14 hot spring baths, two saunas, two Finnish baths, gym and a restaurant with international and regional meals. Added to this is a conference room, a children's club and a living room, reading and games.

Hot springs arise at temperatures ranging from 52°C to 58°C, which are applied together with different types of massages and are also invited to drink the water.

On the other hand, in the town of Vinalito, in the southwest of the province, are the thermal baths of Caimancito. There arose a small complex that includes a inn, three thermal pools (one deck), confectionery and dining room. You can also camp for the day.

Jump, the pretty one. 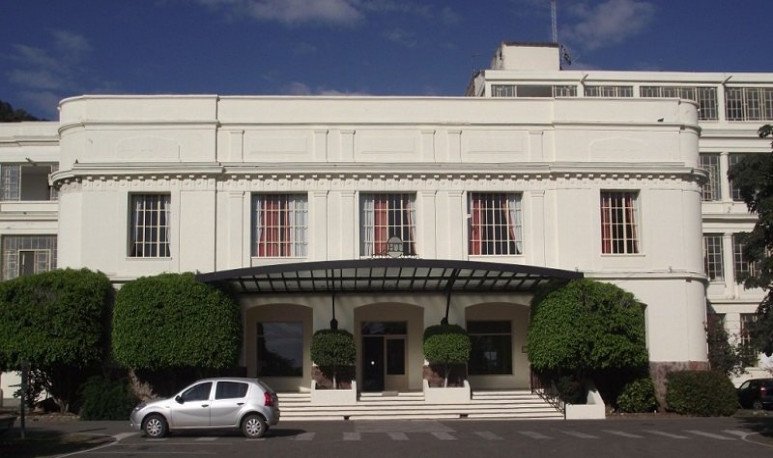 The springs of  Rosario de la Frontera  — 176 km from the city of Salta — find in their emblematic Hotel Termas the ideal place to take advantage of them. The complex, opened since April 1880, is located at the foot of the mountains, 935 masl. Its founder was Antonio Palau, who initially opened roads and dismantled the vegetation, and then erected a precarious building of wooden boxes near the fountains, thus the first pavilion of hot springs in South America was born.

Then followed the first swimming pools and the primitive hotel called “Martín García”. The establishment has been distinguished personalities such as presidents Domingo Sarmiento, Bartolomé Mitre, Nicolás Avellaneda and Hipólito Irigoyen; sculptor Lola Mora and Tomás Anchorena, among others.

Today, from different depths arise nine springs with waters of varying characteristics and temperatures. Services can be enjoyed all year round and include saltwater, sulphurous, ferruginous and silicose treatments in individual cabinets, as well as radioactive mud, under strict supervision of professional nurses. In Salta, the Hotel Termas enjoys elegance and a long history. The elegant hotel has several categories of rooms, as well as an outdoor swimming pool and a restaurant.

A diamond in the rough

Catamarca has more than 30 natural springs scattered in its geography, with an ideal mineralization for the treatment of different conditions. The provincial government has been promoting a plan for thermal development, emphasizing “The Baths of the Adobe Route”. These include the complexes of Fiambalá and La Aguadita (Tinogasta), which currently have the most infrastructure. There are also the hot springs of Quebrada de Haulfin and Villa Vil (Belén), Lavalle (Santa Rosa) and San Martín (Capayán).

It should be remembered that Fiambalá is located southwest of Catamarca, 342 km from its capital, San Fernando. The thermal complex is 12 km from the city centre and is located 1650 m above a striking canyon on the slopes of the Fiambalá mountain range. It is composed of 14 outdoor cascading pools with hyperthermal waters ranging from 32.5°C to 58.6°C. Facilities are complemented by a restaurant, two cabins, a inn and a camping.

Meanwhile, Tinogasta, also in the southwest of the province, boasts the La Aguadita Thermal Complex. Located in a valley on the banks of the Abaucán River, it has three outdoor pools and a panoramic view of the Zapata mountain range. Its hot springs are spring, with temperatures of 30.2°C and medium mineralization. The resort is 15 km from the centre of Tinogasta.

In the Garden of the Argentine North

Within its small territory, Tucumán is also lucky enough to count on the benefits of the hot springs. The Termas de Taco Ralo are located in the department of Graneros, southeast of the province, 119 km from San Miguel. The area enjoys this natural resource thanks to its rising wells, which emanate water that can reach 52°C.

In the 1960s, the memory of Taco Ralo said, the public thermal baths of the today redesigned and refurbished square of Taco Ralo, the only public promenade in the town. The government of the province of Tucumán reopened the thermal inn and currently operates continuously.

It should be noted that the Taco Ralo Hot Springs share the same thermal aquifer with the Rio Hondo Hot Springs.

A Santa in La Rioja 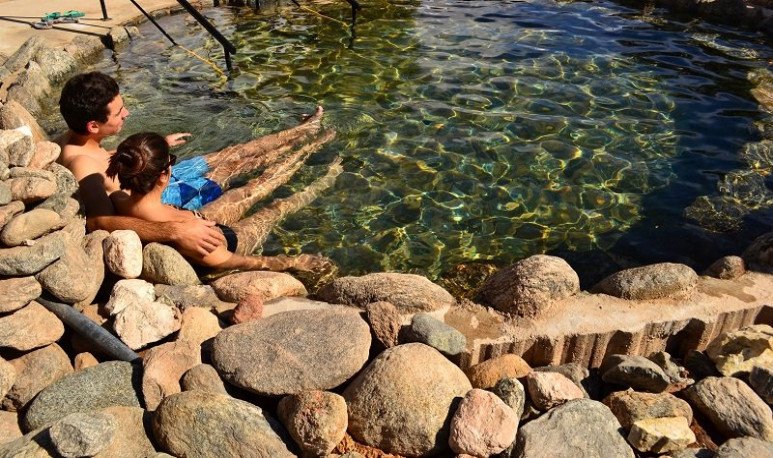 The best known thermal springs in La Rioja are the Termas de Santa Teresita, in the department of Arauco. Located two hours from the capital city, it can be reached via a distance of 117 km. The rising waters reach a temperature of 46°C and the complex has a hostel, camping, children's games, dining room and garages.

It should be remembered that these lands were made known by the priest of Buenos Aires Federico Warner, who traveled the area became interested in the rising waters and decided to stay to promote their healing qualities. He himself built a hotel and a small and picturesque chapel (now ruins) where the image of Saint Theresa, from whom the name of the place derives was venerated.