Did you know that our country has two interplanetary valleys? We tell you how to find them. 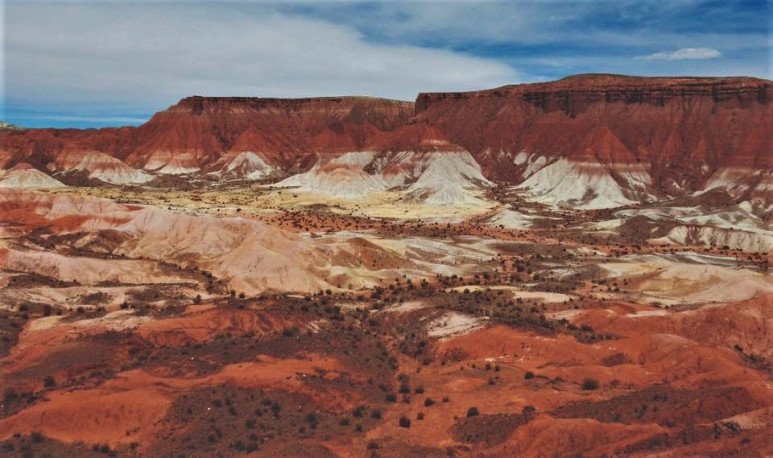 Argentina is full of natural tourist attractions to explore. Unique beauties, places impossible to adjectivate. In this note we're going to tell you about two places that have interplanetary names, or to be more accurate from our only satellite.

Although when it comes to catastrophic it is called  Ichigualasto Provincial Park , for the purposes of this note we will call it as it is usually known, Valle de la Luna. Located in the province of San Juan in northwestern Argentina, this place is remote, hot, incredibly dry and generally inhospitable, but nevertheless manages to attract more than 50,000 tourists every year.

The park takes its name from the  Ischigualasto Formation , a large basin of sedimentary rock that was once a lush tropical swamp and is now a playground for paleontologists. It contains a large number of fossils, but its meaning is much deeper than that. It is the only known place on the planet that contains a complete fossil record for the entire Triassic Period, a span of about 45 million years at the beginning of the Mesozoic Era, which began approximately 245 million years ago. What is so significant about this time period is that it is when the first dinosaurs and mammals appeared. As a result, Ischigualasto is the best place to search for fossils of intermediate species.

Many of the  fossils in Ischigualasto  are from reptiles that ate plants called rinchosaurs, while many others are from cynodontes. The word cynodonto means “dog teeth”, referring to its dental structure similar to a mammalian. They walked on two legs, were covered with hair and were warm blooded, however, like reptiles, they still lay eggs.

Fossils, however significant and numerous, are not the biggest attraction of Ischigualasto. Tourists come to see the rock formations of the Moon Valley, and although the images do not remind the moon, they certainly have an otherworldly appearance. The Park also contains  petroglyphs  and other artifacts from the ancient human inhabitants of the area. Due to its great scientific importance and its unique and beautiful landscape, UNESCO named it, along with the nearby Talampaya National Park, a World Heritage Site in 2000.

Jujuy also has his own.

A little further north, in the province of  Jujuy , in northern Argentina, is another  Valle de la Luna , also named as Valle de Marte. This geological formation, with less marketing than the previous one, is slowly becoming a tourist attraction of the western provincial. Its relevance is associated by being next to the new trace of the RN40, which was completed a few years ago. This valley, unlike Ichigualasto, is 3770 meters above sea level. That is, in the middle of the Jujujuño highlands, punctually in Matancillas, at the foot of the López mountain range and Granada Volcano. Very close to  Cusi Cusi  from there, there are those who call it the Valley of the Moon of Cusi Cusi. From there it is possible to tour circuits with local guides, stay in inns and enjoy  Jujujuña cuisine .

The place was baptized by the original peoples as  “Puca Ukúqai”  which means in Quechua very appropriately “Red Valley”. Its pinnacles are located more than 800 metres above the valley floor. The color of its rocks ranges from white and gray to red and carmine. It mainly possesses volcanic ash.

To get from Quiaca you must travel Route 40 or from  Abra Pampa  it is about 60 kilometers by a gravel road.