This circuit seems stopped in time, because it refers tourists to everyday customs of the beginning of the last century. 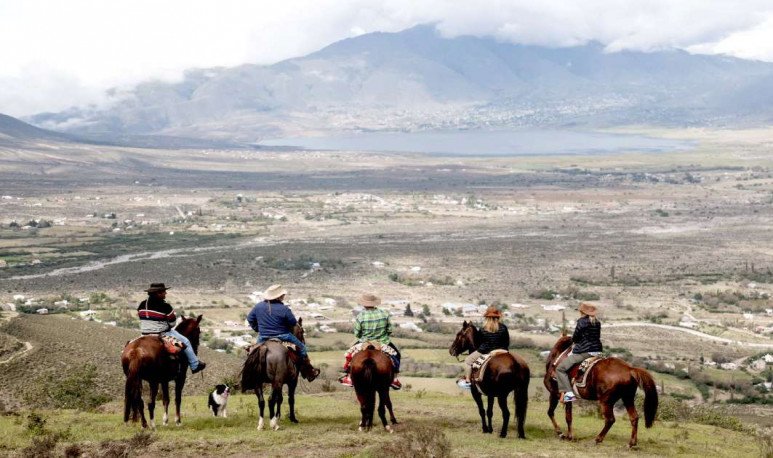 Departing on the  RN 9 , and after traveling  50 kilometers north of the capital of Tucumana you will reach  Choromoro , a town of 500 inhabitants. Unique landscapes emerge from there and along RP 312. The towns of Choromoro, Chuscha, La Hoguera, Gonzalo and Potrero, await visitors to enjoy their  rivers  and streams and their many activities, such as hiking, horseback riding and even photographic safaris. Crafts occupy a special place in this area. If you look at any stall with these products on the route, do not forget to go down, even if it is not more to contemplate those works in leather, such as pellones (the sheep's cuerito) and fabrics that have international recognition.

In Choromoro you will find the  Phyto-Zoological Reserve Dr. Carlos Pellegrini  which is only 5 km from its main square. Its 400 hectares invite you to a two-and-a-half hour tour where you can see more than 150 exotic species and also native species such as foxes, eagles, cougars and tapirs.

From that attraction, and returning to RN 9, following north at just 12 kilometers is the access, by RP 311, to San Pedro de Colalao, a  tourist village  extended along a narrow valley at 700 meters above sea level and bordered by two typical mountain rivers: Tipa and Tacanas. The climate there is moderate which makes it possible to enjoy summers in full sun, with cool nights.

The Leocadio Paz  Central Square  is framed by old mansions of the late nineteenth century, with sober lines of Italian classicism. Its old grove of tipes and flowers season next to the Church, the Juan Bautista Alberdi Library, among other buildings stand out in the surroundings. The  Garcia Salemi Archaeological Museum , which  operates in the former Indian Cabildo, is a historic building dating from 1850. An important collection of pieces from our native cultures are exhibited on site.

If you choose  San Pedro de Colalao  to visit in February it is important to book in advance. The reason is that tens of thousands of pilgrims arrive at that time to pray and thank the Virgin Mary in the  Grotto of Lourdes.  It is located at the very entrance of the villa. This religious site, replica of the Grotto de Lourdes in France, has a stone brought from the French Sanctuary.

Continuing along route 9, and 73 kilometers north of the capital, we reach Trancas, the scene of some of the most resonant events of our independence when in 1816, General Manuel Belgrano retook command of the army of the North.

With the arrival of the railway, around 1900, the town moved 2 km south-east of its current site. The  Temple of the Sacred Heart , whose original building was built around 1760, was witnessed from the old town. Its walls witnessed the firing, in 1824, of Barnabé Araoz, first Governor of Tucumán and the baptism of the sculptor Lola Mora.

The  other must-see  in  San Pedro de  Colalao

Painted Stone , a sacred historical and archaeological site. Not only does size capture the curiosity of those who know it, but this rock features 45 petroglyphs that show contours of birds and other animals carved on their side faces. Being in that space connects with an indescribable millennial energy. We have to be there to understand what we're saying. It is only an hour and a half walk from St. Peter's Square. It is recommended to be accompanied by a guide, as it is a medium difficulty crossing in which you have to cross several times the bed of the river Tipa.

The Puente del Indio,  a splendid and ancient sculpture carved by our mother nature, where erosion formed a bridge of adventurous access. It is located in the  mountain Red Dente  12 kilometers from the center of the village of San Pedro. You can reach a point with a 4x4 vehicle or on horseback and then climb the mountain on foot. It is suggested to take this excursion in the company of an authorized guide, the circuit is of medium difficulty.

Laguna Escondida:  It is reached from the main square in a northwest direction, bordering the ascending margins of Arroyo Chulca. Along the way the views are amazing. The place is dense vegetation and rich in fauna. The scenic beauty that, due to its privileged location, will allow visitors to enjoy a panoramic view of San Pedro and its surroundings. This splendid mirror of water, a few meters deep, sprouts hidden among the mountains, one of which resembles a  pyramid . It is only reached after several hours of walking or horseback riding tour, always accompanied by Vaquean guides in the area.

Tiu Cañada:  mixed place name: “Cañada de Arena” or “Cañada Arenosa” which designates a place about 7 kilometers southwest of the main square of San Pedro de Colalao, on the left bank of the Tipas River. Here we find a solar calendar built with  monoliths , with a large central stone, two peripheral, and a fourth stone indicating the azimuth of the summer solstice. Used by the native peoples to know the planting and harvesting times. With the excavations were found funerary urns with  human bones  and remains of incised ceramics and other painted ones. Also a semi-buried mortar in the vicinity of an ancient ditch. Following the course of the river Tipas, 3 km upstream, are the Petroglyphs of Ovejería, where perhaps the rites indicated by this stone calendar will be celebrated.

Hualinchay:  Concluding this circuit, 18 km west of the Villa de San Pedro, is this picturesque farmhouse at 1700 meters above sea level. One of its main attractions is the campsite with pools with mountain water which is clearly a real relaxation for those who immerse themselves in them. From this town there is a new route that links this region with the town of Colalao del Valle. This road, called Cruce de Lara, offers a unique landscape that falls in love with everyone who travels it. The same should be done with caution, only in  4x4  vehicles and always consulting previously its condition, since the route is winding. This excursion can also be done on horseback.

Route 40 and its attractions in northern Argentina

How to get around in San Juan: the city of tourism and sports

To look at you better

Where is the heart of the country