Home Travel Trekking for adventurers: the 5 most visited trails in the mountains of San Luis

Walking. Follow a path, get lost, find yourself. For adventure fans, there is nothing better than walking around the world. 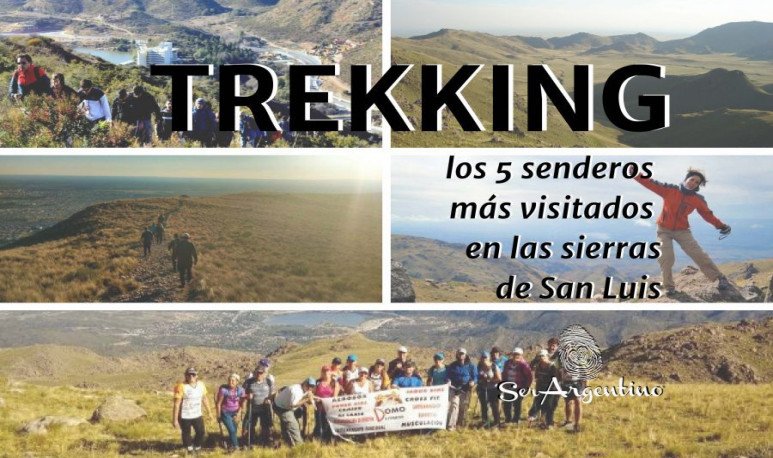 Then five unique tours between the mountains of San Luis to discover the true sense of beauty and nature in its purest state.
Cerro El Morro, San Luis
It is located in the northeast of the province of San Luis, measuring 1600 meters high is not a stratovolcano as is usually considered, but it was created by volcanic processes approximately 2000 million years ago. El Morro hill is part of the System of Protected Natural Areas of the province of San Luis.
If we border the hill to the south, shortly before reaching the town of San José del Morro, there is the La Morena estancia. From there you can climb the volcano by trekking or on a 4×4 along the trail that leads to the crater. At its top it presents a depression with small volcanic cones whose heights range from 1500 to 1600 meters.
The native vegetation is grassland and mountain serrano. The presence of these pastures in the center of the volcanic cone is used for grazing cattle, sheep, horses and goats.
Cerro de La Cruz, Potrero de Los Funes
The hill became the ideal place for trekking beginners to take their first steps, has a cumulative slope of 460 meters, so it is considered low difficulty. It is located in Juana Koslay, just over 10 kilometers from the city of San Luis. To ascend you must take the passage that is located between 1st de Mayo and Roger Balet streets. At the base, there is a sign that welcomes walkers.
Cerro de la Cruz has a height of 1215 meters. When you reach the top you can enjoy a beautiful view of the city of San Luis. In total, 6.5 kilometres are traveled from the base to the highest point. The estimated time of promotion for a beginner is between an hour and a half or two of climb and the same time of descent.
Valle de Piedra, Potrero de Los Funes
It is located in one of the “roofs” of Potrero de los Funes and presents an interesting path, as it crosses by mountains of molles, steals, shins, among other species. The start of the trail is accessed on the third corner of the road that starts behind the church, the estimated time of the tour is 8 hours. This trail is a trail that runs along the stream Los Molles that originates piletons in the stone suitable to bathe and enjoy the freshness of its waters.
It also crosses several gorges that have lush vegetation, which then ascending above 1400 meters is lost to give rise to a herbaceous stratum accompanied by rocky floor, hence the name of the hill.
Cerro San Ignacio
It rises to 1,328 meters. It is accessed on horseback or on foot through trails of goats or footprints crossing the birth of slopes and vegetation with abundant mountain mountains.
Cerro Retana
It is one of the highest hills, located in the Central Sierras of San Luis, with a height of 2,152 meters above sea level. It can be accessed on foot or on horseback through grasslands, mountains, canyons, rivers and slopes to then reach the summit where it is possible to appreciate the beautiful mountain landscape, from its natural rock balconies.
It is suitable for trekking, of moderate level, through a beautiful green landscape, the climb to the top of the hill lasts about a full day. There are two access roads: one to the east, where the mountains have soft undulations and wet greens, and the other to the west, where the mountain falls abruptly causing deep canyons, this option demands greater physical effort and is accessed from the Suyuque, bordering the river, by the Rock & Rock.oacute; n located 7 km from the capital of Sanluisña.

The 7 keys to preventing accidents in the mountains

Did you know that camping is good for your health?

Argentine tourists: a day of hospitalization in the region can cost up to $2,000

“If you pass through the Cheese Season, you can't stop knowing Tandil”

5 places to do trekking throughout the country

Do you know where “The House of the Bottles” is?