Particular and beautiful, Lake Fagnano is another natural wonders that make the island of Tierra del Fuego a unique place. 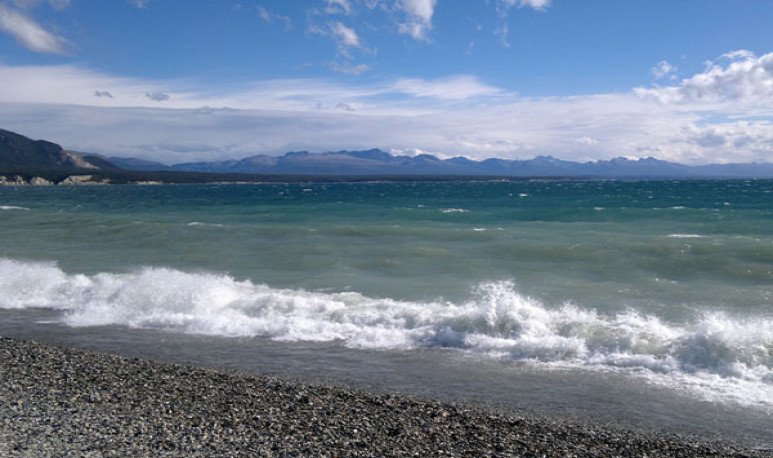 Located near   Tolhuin , the heart of  Tierra del Fuego  , the  lake Fagnano , is one of the largest in the country shared with Chile, given that it  has an upper area of almost 600 square kilometers and has a depth that reaches 200 meters.

Its waters are divided between Chile and our country: most of them are on the Argentine side, but it draints to the Chilean side. Different activities are carried out on its shores, while there are also different accommodations to enjoy the imposing landscape of the end of the world.

Its name is due to the first Salesian missionary of southern Patagonia, José Fagnano.  The Selknam, native to the region, called it Khami Lake.  While  sport fishing  or boat rides are the most popular activities in the Fagnano, there are also various activities in the vicinity of the water mirror, such as  horseback riding, hiking, biking or ATV rides  .

The most daring can go mountain biking on different trails between 4 and 6 kilometers that are located in the surroundings of Cerro Jeujepen, and cross chorrillos and  castoreras, you can see peatlands and peat bogs and is finished on the banks of the Aguas Blancas lagoon.

Also, on the southeast coast of the lake was inaugurated several years ago the  Mirador Río Valdez , which was built with natural material from the area, such as lenga wood, which gives it an environment harmonically intertwined with the lake. There, in addition to the beautiful view, it is a strategic point to observe native birds such as petrels, albatross and cauquenes.

In the vicinity of the lake is also the  Khami Historical Museum , located where the first police station in the area was built. Simple and small, but at the same time with good information, it has elements to know the history of Tolhuin.

Also a short distance from the Fagnano, is  Laguna Negra , a water mirror separated from the large lake by a gravel cord, originated by a large seismic movement. There you can take a four-kilometer journey, which takes about two hours in which you travel a forest of  lengas  and ñires, passing through turbals, with a panoramic view on the Wind peninsula.

To the north of Lake Fagnano -and about 60 kilometers from Tolhuin-, is the  Corazón de la Isla Provincial Reserve, located in the center of the province  and reserve comprises the part of Lake Deseado located within the Argentine Republic, all the mirrors and watercourses, islands and islets of the Lakes Chepelmut, Yehuin and Yakush, and the inland lagoons.

It is a space that  was created in 1995 in order to protect an area with a high scenic and landscape value , while the aim was to generate a new tourist offer in the province

With areas enabled for camping, with cooking hobs included within its 100 thousand hectares, the reserve offers visitors rural tourism, sport fishing, hiking and bird watching. The main feature of this last activity is the sighting of condors from the top of Shenolsh hill, near Lake Yehuin. It is very common to see the majestic bird frequenting that place due to the existence of a barley on top.