Santiago del Estero, in Argentina, was the first city founded by Spanish colonizers. Hence the title of Mother of Cities. We take a tour of its religious heritage. 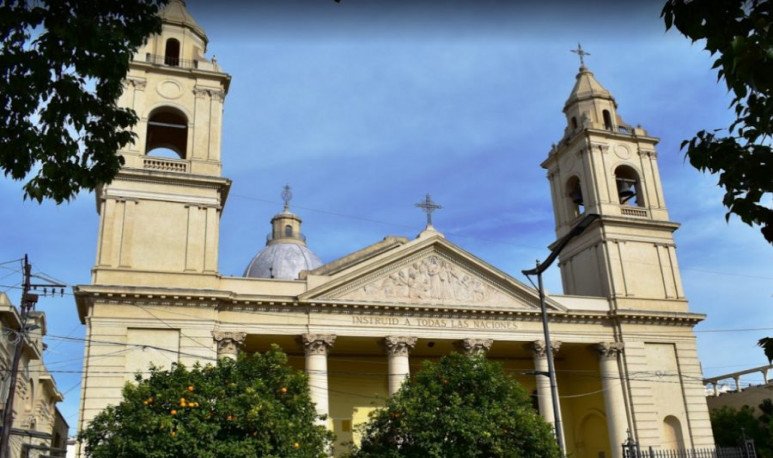 The religiosity of the people of Santiago, in  Northern Argentina , and their deep  Christian faith  were present in this province, throughout its centenary existence. The capital jealously holds two unique jewels.

La  Sabana Santa , replica of the Santo Sudario, which is located in the Chapel of the  Convent Santo Domingo . It is a negative portrait of  Christ  on the canvas caused by the blood of his wounds and the vapors dismissed by the body. It is unique in America and the second in the world for its fidelity to the authentic Shroud of Turin.

Also the  Chapel Cell of San Francisco Solano , reconstruction of the house that occupied during its passage through  Santiago de Estero  in the sixteenth century. There is also the chasuble of the Saint, which was embroidered by the natives along with other personal elements.

The Cathedral Basilica Our Lady of Carmen

In 1570 this temple was first installed,  Mother of Catedrals . That year a Papal Bull instituted the  first diocese  in  Argentina . The current temple is from 1876 under the name of Nuestra Señora del Carmen, patron saint of the city of Santiago del Estero. It is the  first cathedral in Argentina .

This  National Historical Monument , is identified by maintaining a neoclassical style, with overlapping orders. Inside there are ancient images such as the Christ of Forgiveness, La Dolorosa, San Juan and the Patron Saint of the city, Santiago Apóstol. There is also the so-called  Altar Santiagueño  where the Lord of  Miracles  of Mailin and the Virgin of the Consolation of Sumampa are located.

The Convent of San Francisco in the Mother of the Cities

The Convent of San Francisco is neo-Gothic style with arches, capitals and needles, is one of the most attractive   temples  in Santiago del Estero. The Franciscan Order settled in the province in 1566. The first temple of the Order was rebuilt 4 times. The second construction was located further west and was the work of  San Francisco Solano  who completed it in 1593. A large flood of the Rio Dulce caused it to be demolished and rebuilt in 1847. The final construction was completed in 1853 and that was the third construction. The  rains  and the salitrous of the ground caused the building to deteriorate again. It started like this. The fourth construction in 1882 that ended on June 20, 1895.

At the beginning of the 20th century the architect José Diaz was commissioned to complete the façade, ornatos and enlargements. On February 6, 1948 the temple and convent complex were declared a  National Historical Monument.

Its plant is in cross latina. It has three naves, choir, sacristy and two bell towers. The main altarpiece is made of pine wood and is laminated in gold, there is the image of San Francisco Solano. The image is the first to be made in Lima del  santo  after his canonization in 1726.

The building keeps inside the  chapel cell , 18th-century reconstruction of the chapel that the   indigenous people   built next to San Francisco in 1590. It was here that he lived during his stay at the Mother of Cities evangelizing Spaniards, Creoles and Indians with the  Bible , the Cross and the  Violin . Modest construction, is a room with  adobe  walls and  thatched  roof. It protects the chasuble, cord and stole of the saint, who died in 1610 in Peru.

In 1969, a  museum of sacred art  was inaugurated in the cloister that links the Chapel Cell with the Church of San Francisco. Pieces from the seventeenth, eighteenth and nineteenth centuries are exhibited here. Since July 24, 1970, a particle of the skull of San Francisco Solano was sheltered and sent from the Convent of Jesus de Lima, where he died. Devotion increases every 24 July, date dedicated to the feast of San Francisco Solano. 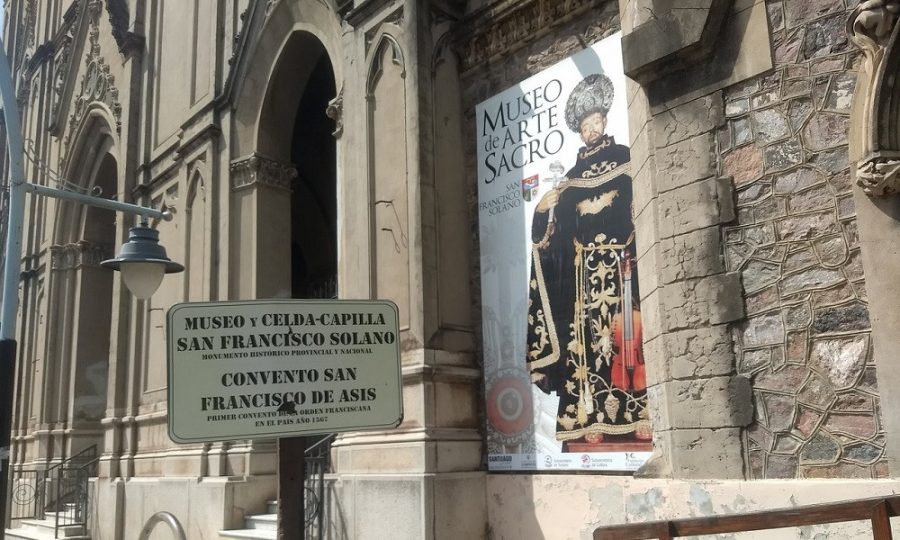 The  Order of Preachers or Dominicans  built its first temple in 1553, in a location where there is no excessive precision. What is known is that the temple had to be  abandoned  because the government forced them to leave. In 1587 they returned and by 1593 they already had a new temple.

Already established definitively in the Mother of Cities they erected a new temple in 1615 to replace the previous one that was already completely deteriorated. This  new temple  also suffered the consequences of  flooding  in the area, which was why the Dominicans decided not to rebuild it and carry out their worship in a small chapel.

When the city moved west, the Order in 1793 moved to the building that had belonged to the   Jesuits        expelled   in 1767, occupying their church and school. As the building was not in good condition, the present temple was erected in 1881.

Inside, historical-religious  relics such as  the Master Jesus, the Immaculate Conception and the Holy Shroud of Turin are venerated. It has been exhibited since December 7, 1986 on one side of the altar, spread over a vertical showcase, which could be turned to see both sides of the savannah. During  Easter  the showcase is the busiest in Santiago.

La Merced in the Mother of Cities

The antecedents of its existence date back to 1565 in an inaccurate place in the city. It was erected as Cathedral by the Bull of Pope Pius V on May 14, 1570 under the title of St. Peter and Paul. The arrival of Fray Francisco de Victoria in 1581 gives rise to the first  Cathedral  not only for Santiago but also in Argentina. In its long history they built it not less than five times.

The second construction in 1612 was destroyed by a voracious fire in 1615. Guided by Dean Juan Ocampo Jaramillo, with few materials, the neighborhood completed its third construction and was inaugurated in January 1617. A flood ten years later swept its fragile bearing. In October 1686 the works were completed for the fourth time under the direction of Don Melchor Suárez de la Concha at the present site. The city endured an earthquake in 1817 that destroyed the Temple.

It was 60 years until it was reinaugurated for fifth. The works were performed by Agustín and Nicolás Cánepa by order of Governor Don Manuel Taboada. It was declared a National Historical Monument by Decree No. 13723 of July 28, 1953.

Our Lady of  Mercy

It has the oldest Mariana Brotherhood of the Mother of Cities, that of Our Lady of Carmen. The Cabildo named her Patroness on April 11, 1760.

The image that today presides over the main altar was donated by Luis Frías and had been originally from Lima, Peru. It shows gold caravans and a pin that belonged to Lorenza Urrejola de Frías. In 1950, Governor Carlos Juárez deposited in his hands a command staff (itin wood, mango and carved silver toe, with precious stones set in gold) gift from the priest Angel Agrelo.

Our Lady of the Consolation of Sumampa

This image was carried by Antonio Farías de Saá, who requested it to a friend from Brazil in 1630. Actually, I commissioned two images, this and the other from Conception. This never came to the buyer's hands because the virgin decided to stay in Buenos Aires, is today the patron saint of Argentina,  Our Lady of Lujan .

The  Virgin  is small in size, made of cooked clay, red dress and blue cloak, with Child Jesus asleep, semi-wrapped in a diaper. The altar of the Virgin shows a beautiful replica, both donations from Gaspar Taboada. 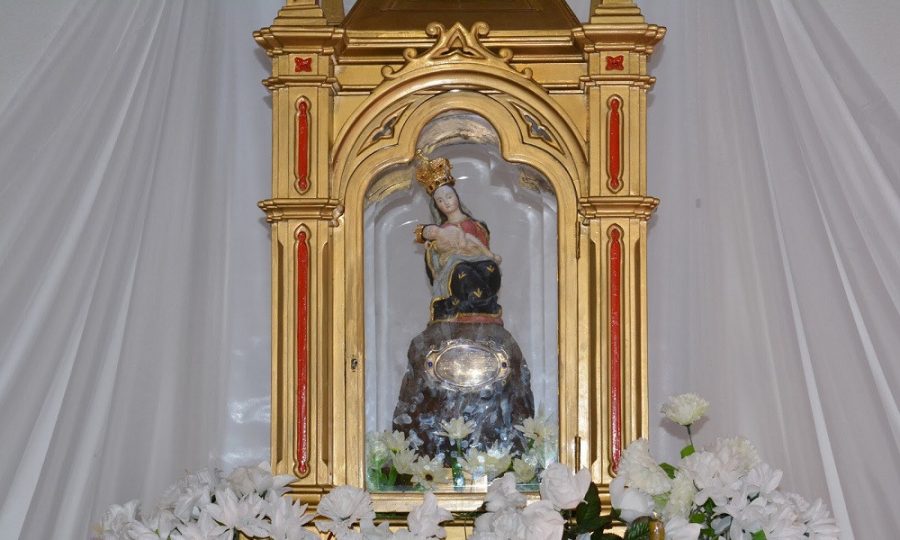 When the temple was rebuilt, its protection was invoked. The altar was donated by the government of the Province in the early twentieth century.

The Crypt of Bishops

In it, the remains of Bishops Yáñez and Weimann and the Chapter Vicar Monsignor Francisco Dubrovich, who disappeared in 1971 have been buried. The remains of Juan Francisco Borges, Antonino Taboada and Manuel Taboada are preserved. Among its ornaments are the Solomonic columns of green onyx that shows the altar of the holy saint in its chapel and the organ dating back to 1931.

La Montonera Chapel in the Mother of the Cities

Its construction is a single ship. Its rustic facade with an old roof of gable tiles. A cattail of simple strokes exhibits on top a cross and in its chings, two bells.

Inside it treasures an ancient image of the virgin of la Montonera. The popular name of La Montonera dates from the time of General Antonino Taboada, when he placed his troops under the protectorate of the Virgin, who, after triumphing in the battle of Pozo de Vargas, paid tribute to him as patron saint.

Due to debts were to top off in 1940, the property to the last  survivor , Doña Petronila Sotelo, and following a neighborhood movement was declared a Provincial Monument on September 25 of that year.

This image that presides over the altar of the Chapel, according to tradition was brought from Peru in 1820. His face is pale in color, measuring one and a half meters, is dressed in white satin and is adorned with jewellery. She's wearing a long black hair. Promesants donated jewelry of great value: golden tendrils and precious stones, silver  crowns  , mantles embroidered with gold threads, etc.

The acts consisted of a novenary that was to end on the eve of the first Sunday in October and a procession to the  Church of La Merced.

The Virgin, dumped with some of the many offerings received, was accompanied by the  faithful , with music, in the middle of Argentine flags.

On the return, in the courtyards of the Sotelo family, their owners, toast were made and danced until dawn.

Convent Sisters of Bethlehem in the Mother of the Cities

The Convent was founded by Ana María Figueroa, disciple of Blessed Maria Antonia de Paz y Figueroa, on December 25, 1821. The first Chapel was built in the Mother of Cities in 1823. In order to improve the  building  in 1898, work began on a second chapel in Gothic-Roman style keeping the first in operation.

In 1903 the last jobs that threaten to fall were demolished. In 1910, the old chapel was demolished, which was moving on the current San Martín square. The current temple was built by architect Aníbal Oberlander in the 1930s and was concluded in 1963 in a style inspired by colonial.

On the Esquiú Trails in Catamarca