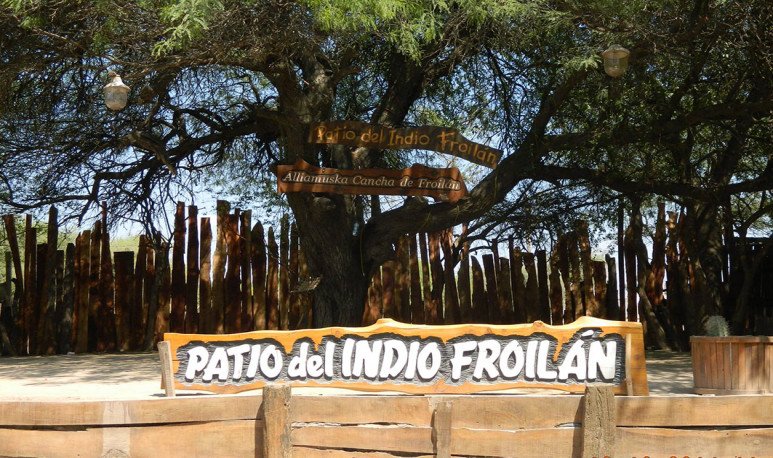 For those who visit the city of Santiago del Estero,  Patio del Indio Froilán  is a must stop. Every year the place receives thousands of domestic and foreign tourists who come to this magical little corner to live the  Santiagueña culture . There you can visit a renowned drum manufacturer who dedicated his life to perfect the making of instruments, which came to be acquired by prominent figures of show business.

Froilán el “Indio” Gonzaléz has been a  bass drum luthier since  he was ten years old and has a space that bears his name. It is a courtyard of one hectare -about - which is intended for  cultural recreation . In it you can enjoy  folk music , typical meals and even dances, all this in a friendly environment where the  local traditions  and visitors are invited to be part of this wonderful meeting.

The Patio had its origin in 1997 when Froilán himself organized his nephew's birthday and came together to guitar with friends. Over the years, more people were added and came to house about a thousand people and became an  icon of santiagueñidad . The space does not seek to be tourist but cultural, to revalue the roots of the province and share a moment with the family. But this space carries in itself something more wonderful and this is the story of Froilan. Like his father, who made percussion instruments, he devoted his life to the same work and even perfected it. He crossed national borders and came to participate in European festivals and won prestigious awards, one of them was a recognition of his career. In 2006  “The Patio del Indio Froilán” was declared of Provincial Cultural Interest.

This renowned artisan manufactured drums for artists such as  Mercedes Sosa,  Chaqueño Palavecino, Shakira, Gustavo Santaolla, Los Chalchaleros, Los Tekis and the list goes on. Currently it only performs work per order. Drums take about two months and they all have their signature. For its manufacture uses ceibo wood, since it considers that this type of material has its own acoustics for its porosity, which allows it to maintain the echo of sound. His working day is hard, he works every day from morning to night and, almost always, in the sight of his apprentices.

The March of Los Bombos is a celebration created by Froilán and is one of the most traditional and representative of Santiago del Estero. It has been held since 2003 as part of the celebrations for the anniversary of the  founding of the city.  The show consists of hundreds of people playing bass drums for 10 minutes and walking through the main streets of the capital of Santiago.

This year  Santiago del Estero celebrated its 467th Anniversary  in a very different way. Although to date the province maintains a stable situation regarding the coronavirus pandemic, it was decided that the festival is held virtual. The reason for this decision was due to the importance of maintaining tradition. The March of Los Bombos, which welcomes tourists from all over the country and abroad, was made through the Internet in 2020 from the patio of Indio Froilán and was attended by dozens of artists who sent images, photos and videos to be broadcast in this new edition.