Home Travel Santa Fe Why this auditorium is exceptional

The auditorium of the National University of Litoral is proud to have hosted great events in Argentine history. 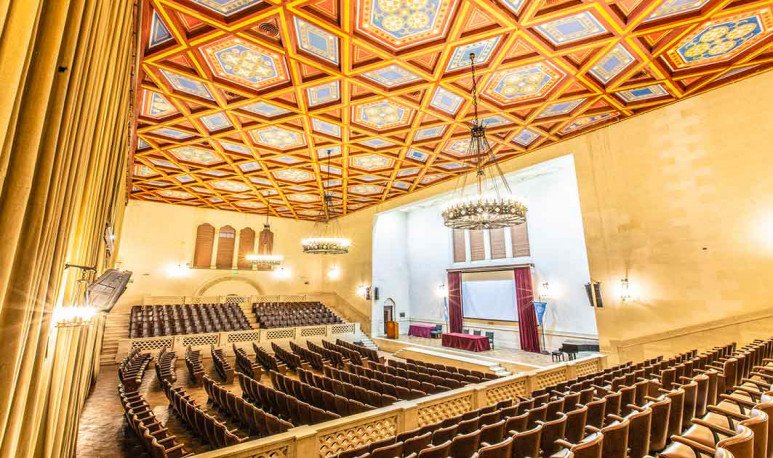 The main auditorium with the National  University  of Litoral was news in recent times, signed by coronavirus, because it was  elected by the provincial deputies  of Santa Fe to hold an extraordinary session. The unique characteristics of the space allowed the councilors to carry out their work  without violating the protocols  indicated in the face of the pandemic.

The place in question is the beautiful paraninfo, its name derives from the person who announced the entry of the incoming course. It had already been on everyone's lips by the end of 2019,  having hosted the presidential debate  and the mainstream media in the country and beyond.

These true milestones for the city of Santa Fe, are far from being a novelty. As early as 1957, the auditorium had been chosen to house  congressmen from  all over the country in the  reform of the National Constitution . Years later, in 1994, the choice of the venue was repeated, for what was  the most important update  introduced since the enactment of the Magna Carta in 1853.

The UNL paraninfo was opened on  23 April 1938 . This luxurious auditorium is also the  seat of the highest governing body  of the National University of Litoral,  the University Assembly. It is also  the venue where the institution  awards honoris causa  awards. Its name derives from the person who announced the entry of the incoming course.

Located in the center of the Rectorate building, it  has been, since its inauguration, the meeting place par excellence  . In addition to having hosted events that marked the history of the country, it is a privileged setting of  artistic and scientific manifestations , which enrich our cultural heritage.

The enclosure has strong  Moorish  influences that are reflected in the ceiling, arches and details of the grandstands. The  painting of the ceiling by the Argentinian plastic artist Francisco Santos , although it has been restored, retains its  original design and colors .

The Paraninfo auditorium has a capacity for  495 people . The stage measures 50 square meters. Their audio systems are self-amplified with state-of-the-art processing. In addition, the video projector supports a large number of formats, including 3D functionality, Full HD and connectivity for various devices. It can be controlled from the stage or the control booth. Current technology allows the installation of smaller body equipment that is less  aggressive  with spaces.

For further information on visits to the Rectorate office, please contact the Reports of the National University of the Litoral (0342) 4571110 internal 230 or e-mail  martigues@unl.edu.ar .