The culture of Santa Fe Capital has an emblematic ruined site: the New Cathedral. 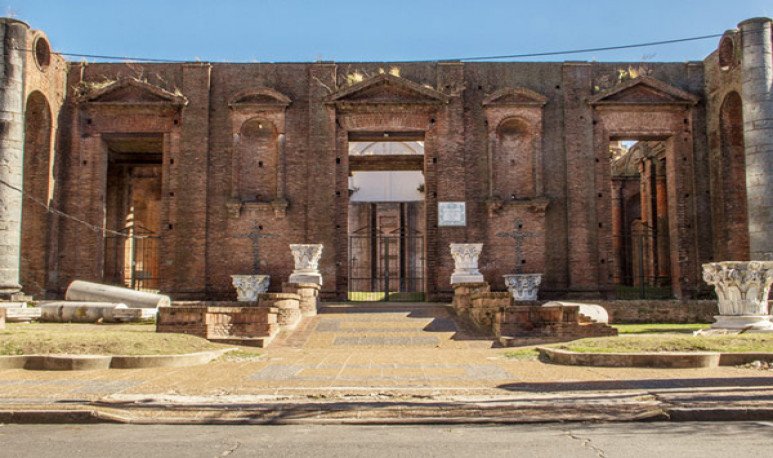 In this note we present you the history of a cathedral that stopped in time.  A ruinous and forgotten set, heritage of the city  of Garay. The New Cathedral, which never worked for the purposes for which it was intended, is a unique space for the culture of the city of Santa Fe. However, this use is also not systematized by a state project. However,  the beautiful property can be visited, when you visit the provincial capital.

The “Catedral Nueva” is located in 1° de Mayo to 2400 street (between Primera Junta and Tucumán), in front of Plaza San Martín, in the city of Santa Fe. It is a very good point to start  walking tours through the capital of Santa Fe .

While, every while, the place is used for musical shows, Santa Fe has a debt to him. The projects were never crystallized to properly refurbish  and launch the unbeatable property. In this regard, and for tourists, it is important to note that the New Cathedral is located in the heart of the microcentro Santafesino.

Why is it in ruins?

The work is a  project conceived in 1897,  created by the architect Juan Bautista Arnaldi and whose works were suspended in 1937.

Only on November 6,  1991, the site was recovered as an outdoor amphitheatre  for the development of cultural activities. For this purpose, a design by the architect Humberto Terrizzano was used, until its closure, in 1999. Then, they were all promises from that date to the present day. Like all ruins, they testify and bring to the present the historical density of the elapsed time.

According to the book “Inventario”, published by the National University of the Litoral, with the creation of the Bishopric of Santa Fe, in 1887,  Bishop  Gelabert began to make arrangements for the construction of a new Cathedral to replace the old parent building. It would be built in front of San Martín Square,  as Governor Luciano Leiva had decided to move the civic center to that place in the city.

On January 17, 1897 the foundation stone was laid and the work began, which developed very slowly until 1930, the year in which they stopped completely because it was decided to finish the sector corresponding to the Sacred Heart of Jesus church, and  the great cathedral project was reduced. on the scale of a parish temple .

A huge project that was truncated

The original proposal, of monumental scale, was resolved with a scheme of three naves and wanders, interrupted by the cruise. At the intersection of it with the main nave would rise the  magnificent dome of 50 meters high , supported by four imposing groups of granite columns and surrounded by as many smaller columns coinciding with the lateral naves.  The central nave, much higher than the lateral ones, had a semicircular archery that opened towards them and had to be covered with a barrel vault with cassetoned sashes arches that would set the rhythm, resting on Corinthian columns.

The presbytery was of great depth and the space solution of the ships continued; the start of the vault was strongly marked with a large cornice, over which were located a series of ogival  windows

The only thing that was done was to knock down a wall that hindered the view of the building.

These ruins give account of a profuse creative activity that touched the experience of all the men and women of Santa Fe who have some relationship, even distant, with art.

As a cultural space

In the Patio  Catedral there were hundreds of recitals by local musicians , in which they participated from school bands to stars of our sound like Carnevva or the  Meridies Choir. But she also did her show Maria Martha Serra Lima, who rescued the place as one of the most beautiful, unique and with best acoustics that stepped in our country. versioned Sandro and others great, to the delight of the attendees.

Classical plays  by the dozens of dramatic edged groups in our region were set up on that stage. Also there did their second aerial theater show the group Puja! The mythical Entepola (Encuentro de Teatro Popular Latinoamericano) had its best weeks under the stars and the shelter of these huge walls. Every weekend , the desangelados kids of the 90s were going to see screenings of rock recitals,  organized by the Cine Club, sitting on the square benches that sometimes populated the stands. These banks were reoccupied when, just a few years ago, a recital was filmed that brought together the pioneers of local beat-rock: Alma Pura, Them, Virgem and Candy Bugs.

How to get to Santa Fe?

How to get around in Santa Fe