Home Travel Santa Fe The most beautiful block on the boulevard

The boulevard roundabout: a reference of the capital of Santa Fe. 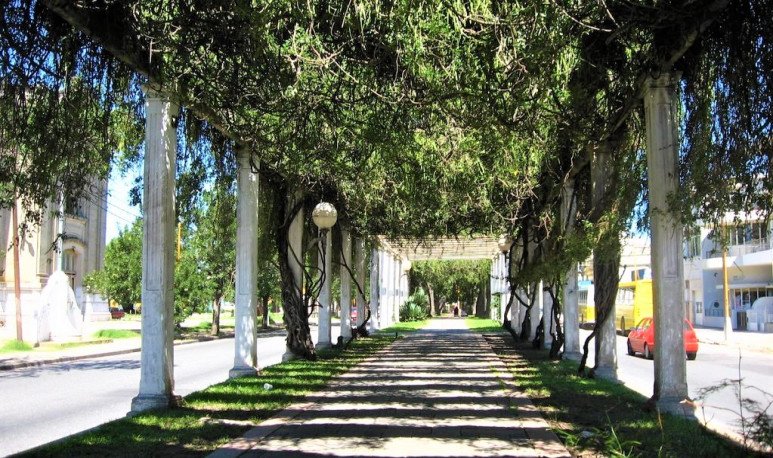 From its origins at the beginning of the 20th century, the Boulevard Gálvez has been a major traffic route, as well as  a prominent urban promenade . At one end of this road, there is a block that is a place of reference for Santafesinos and visitors. We're talking about the famous gazebo. Its centrality, its intimate relationship with the traditional  Candioti Quarter  and the fact that it connects directly to the Pendant Bridge make it a key point. Today, the roundabout is the cultural heritage of the city of Garay and National Historical Monument.

Depending on whether the walk is made from West to East or vice versa, the attraction we talk about in this note is located at the beginning or end of Boulevard Gálvez. Actually, the fact of  going out for a walk along the boulevard  tends to be done in the first of the options. A few meters from the roundabout are two other important points of Santafesino tourism: La casa de la cultura and La Estación Belgrano.

In front of Manuel Belgrano station, the roundabout generates  a break on the Boulevard Gálvez route  . It was designed in 1939 and placed in a space that was originally surrounded by palm trees. A lot of them are gone.

It is very interesting to take a sightseeing tour of the main attractions offered by Boulevard Gálvez. There are many of its recovered buildings, small palaces of the early twentieth century and tourist-cultural proposals that allow us to understand the centrality of this boulevard and  its intimate relationship with the traditional Candioti Quarter  . The pergola, which spans an entire block between Avellaneda and Dorrego, is a must on this outdoor tour.

In Santa Fe, we all call this place “the gazebo.” But some purists of  architecture  or landscaping claim that it is actually a pergola. It is that a gazebo is a “gazebo” or generally round space that usually exist in the gardens, fenced by climbing plants, vines or trees.

What we have on the boulevard santafesino, on the other hand, is  a corridor flanked by vertical columns  (called pillars) that support longitudinal beams (sleepers). These join the columns on each side, and other transverse columns supported on the anterior (cabios) joining both sides and forming an open trellis. There they develop climbing plants with beautiful flowers. That description matches what a pergola is. The pergolas are architectural elements of greater longevity than the tunnels, which were often formed by young and flexible shoots of willows or hazelnuts joined by the head to form a series of arches, on which longitudinal slats were woven, where  the Climbing plants to make a cool, shady and moderately dry walk.

Whatever the technical name you should have, in Santa Fe, we love this place. When we walk along boulevard on a hot afternoon, getting to this block is to travel an oasis. The freshness of its shade and the  perfume  of its flowers invite you to sit on one of its benches and drink a refreshment. Or just contemplate the most beautiful area of the provincial capital. For many, talking about this gazebo brings a lot of nostalgia . Relive memories of yesterday and today in a story that leaves no one indifferent . It is a place of reference and belonging to everyone. Meeting space, memory and emblem of the Santafesinos.