“El López Claro” is the Casa Museo of the city of Santa Fe. It was home to a great plastic artist who developed his work in the provincial capital. 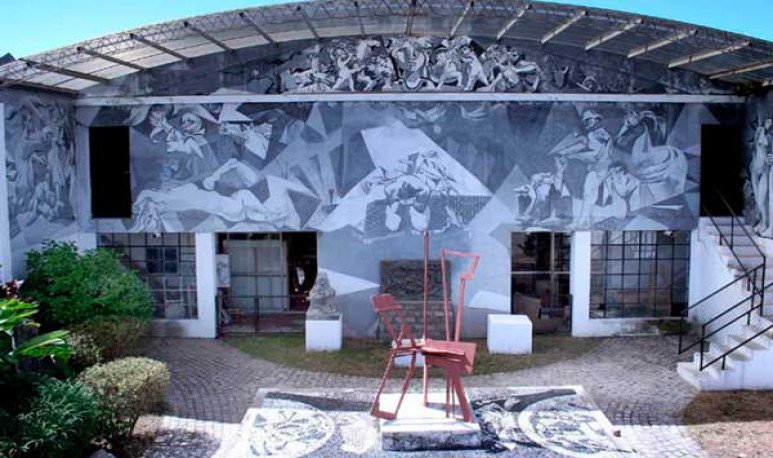 In  Guadalupe , a residential and lagoon district, where the Basilica of the same name prevails in the landscape with its majesty, the city of Santa Fe has a museum.  Far from the traditional historical and central circuit , it is more than a museum, it is a House Museum.

The house of César López Claro, a plastic artist and María Brizzi, his wife and dance teacher of recognized and valued trajectory, was donated to the city by the couple in  1990. This was the foundation that bears the name of the artist  who, although born in Buenos Aires, adopted this city as his own and developed an extraordinary career there.

In the  40s of the last century, López Claro designed and built much of the building  to be his permanent residence, but with the idea, already at that time, that it could once become a cultural center. Thus, making the donation and becoming “Casa Museo” in the life of the inhabitants, they reserved some private spaces to continue their domestic life, sharing the others for exhibitions and workshops.

Not only in the museum are his works, which are numbered hundreds in paintings and  sculptures  , and thousands in drawings. The generosity of this artist allows different institutions and public spaces of the city to have murals of his authorship, large and smaller works. These  represent, in general, themes related to landscape, human figures, nudes, still life, self-portraits, portraits and abstractions . Some of his creations have emigrated and are exhibited abroad.

A house to visit

Artist and teacher of plastic, López Claro  has received numerous awards . The Grand Prix of Brussels in Belgium, an illustrious citizen of the City of Santa Fe, Diploma of Honour of the National Senate, for his work “Lex Legum” in tribute to the reform of the Constitution of 1994, Member of the Honorary Social Council of the National University  of the Litoral, Prize “Major Notable” (2003) and others awarded not only in the environment of plastic, but also in the  struggle for human rights.

On his death, in 2005, at the age of 92, his wife inherited more than 2000 works from the artist and proceeds to donate them to the museum, which sees, in this way, significantly increased his heritage. When Maria dies,  the entire property is dedicated to the work of exhibition and cultural extension,  housing a library specializing in Art and Literature, a Centre for Documentation, Digitalization and Thematic References, a room for talks and workshops and an exhibition gallery.permanent.

There are numerous guided tours for tourists and students from schools in the city and the region, to the Setúbal Lagoon and the Basilica Nuestra Señora de Guadalupe and add to your tour this House Museum,  a place full of art, peace and love, which is worth knowing..

“ The Foundation will bear my name, but it will be next to it that of Mary, my usual companion, and when from our names it is only memory, I hope that this Foundation that we donate to Santa Fe (my country) will live for and for ever.” César Lopez Claro