The Hanging Bridge is a symbol of the city, which crosses the waters of the imposing Setúbal Lagoon and connects the West Coast with the East. 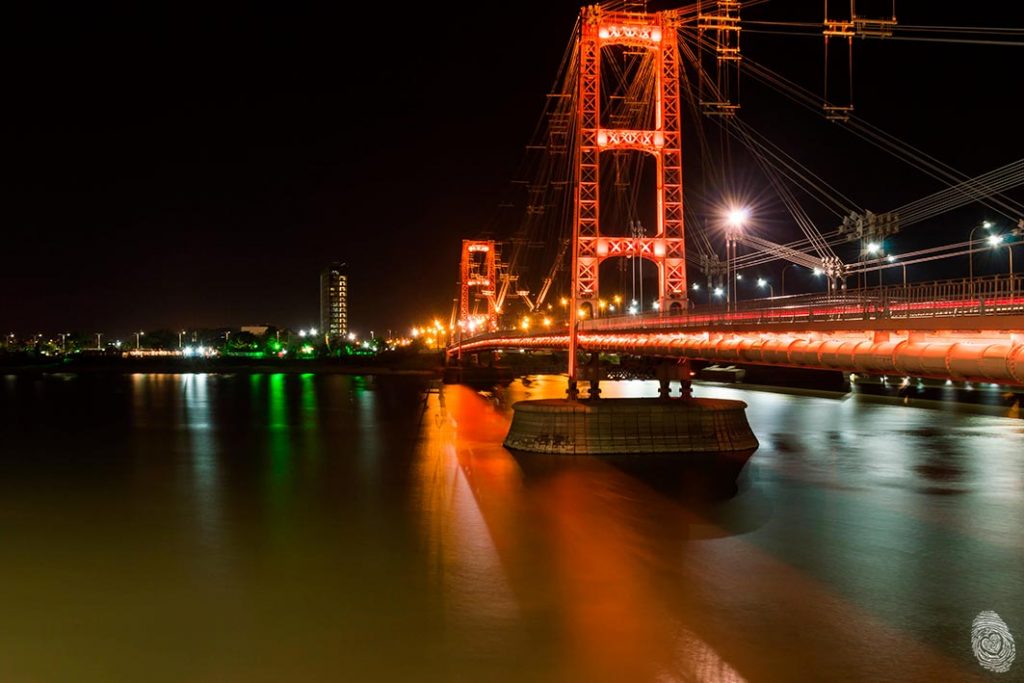 It is a must for any tourist who wants to know the history of this city. This viaduct retains a long and interesting history dating back to an errumbe almost total of the Hanging Bridge and its subsequent restoration after many years of neglect.

The Suspension Bridge was originally designed to transfer water from Colastiné . Today it is not only a tourist landmark in Santa Fe, but it is also an access route for many students who attend daily to the University City and to the neighbors living in the El Pozo neighborhood.

Before the bridge was built as we know it today, there were three failed attempts. The first was in1903, when the governor Santafesino Dr. Rodolfo Freyre, raised the need to build a water intake in Colastiné, in order to supply the city.

The project was supported by Health Works of the Nation (now Obras Sanitarias), and consisted of a wooden bridge over Setúbal, founded on piles, through which the pipes of the aqueductwould pass through.

But it had an unsuccessfulending: when the works were to be completed, on June 13, 1905, the pressure of the chamallottes embankments razed the stretch Central.

Later, Health Works raised girders in the form of a cage, but after four years, the lagoon again collapsed the work.

The third attempt was in the hands of the Eng. Rogelio Sequeiro, who designed a concrete road bridge with piles every 12 meters, where would pass the pipes of the aqueduct, but again it was taken by the current of the Setúbal and its embalmed chamallots.

In1922, by the hand of theSantafesino Engineer MarcialCandiotiin the presidency of Works Sanitary of the Nation, Engineer Antonio Paitoví is entrusted with a new project. He proposes a semi-rigid three-section bridge that began construction in mid-1924, and the public was enabled on 8 of June 1928 with the name of its propellant “Engineer Rafael Marcial Candioti.”

The construction of the pillars and anchors was carried out by Eng. Alberto Monís. The metallic part was awarded to the Societé des Chantiers et Ateliers de la Gironde de Port a Mousson (France), associated with M. G. Leinekugel le Cocq. Then it was built in France. its initial metal structure, and then mounted in its current location on the piles that it planted Health Works of the Nation.

Four decades later, the works to build a viaduct parallel to the bridge and thus the Bridge is born Oroño. It was inaugurated in 1970 and worked as a complement to the Hanging Bridge, which only allowed reduced traffic. Both bridges coexisted until 1983, when —after 55 years of crowning the postcards santafesinas and in the framework of an extraordinary flood of the Rio+collapsed the Hanging Bridge, in front of the distressed eyes of the neighbors.

About bodies, curves and media