In addition to the French community's imprint in the history of Santa Fe, the headquarters of the Alliance is a tourist attraction in itself. 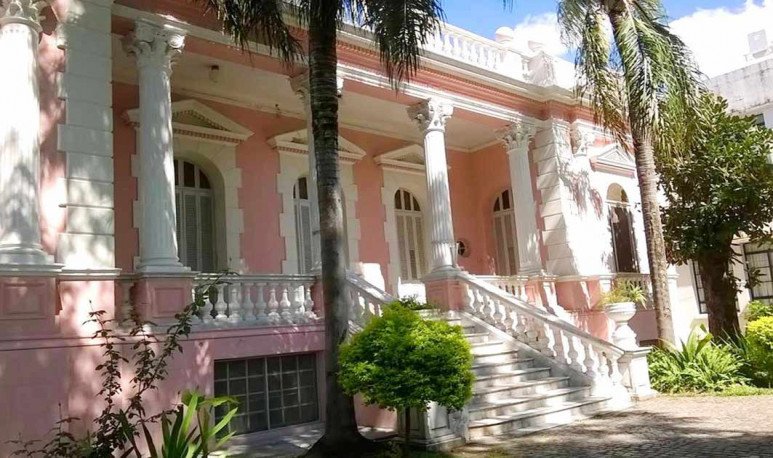 The house of the Alliance Française is an  important reference in the culture of  Santafesina. Visited by relevant political  figures  , diplomats, artists, writers and representatives of the entire cultural movement of the city, it is a living testimony of the French culture that has been embodied in architecture, art, language and customs in Barrio Candioti, the trendy area of Santa Fe.

The French Alliance became  a point of interest for visitors to the city  and, in response, is on the tourist circuit of the capital of Santafesina.

It is important to make  a historical review , to know how the representative places of cities get to that status.

In 1882 the Ferrocarril a las Colonias, or Ferrocarril Santa Fe, was built in Santa Fe by the  French Railway Company . From the installation of this company, the French community emerged in the city. When the railway is privatised, passing first into the hands of Fives Lille and then Chemins de Fer Argentina, there is  a great expansion of the company  that is causing the transformation of Santafesina society,  its urban planning and its social and cultural life  .

Gálvez Boulevard, direct connection to Setúbal Lagoon, is designed with French characteristics, providing  an exquisite landscape,  enjoyed by day with its leafy grove of imported species from Europe and flower bushes. Also at night, since the electric light is installed on its important streetlights. Cars, trams and pedestrians circulate along this wide promenade.

To the south of the Bulevard, and to the border with the local  port  , the Candioti District (today, Candioti Sur) takes its own appearance. With large French houses, usually inhabited by the railway staff, alternated with simpler dwellings, in which administrative employees and workers lived. To a greater or lesser extent, they all tried to  adopt the French characteristic that the neighbourhood still holds today .

At the intersection of Bulevard and Las Heras Street, you will find the old house of the railway director. It stands out for its elegance that resembles a palace. Covered with marbles and columns, with Corinthian capitals, responding to the  mix of styles that dominated the architecture  of the time. A wide curved ramp with turned balustrade, gave entrance to the house. Neighbors and passers-by could not help but stop to contemplate not only the building, but also  its beautiful garden  that framed it, with exquisitely selected vegetation.

An educational and social purpose

Many were the activities that the French community carried out in this house. There were social gatherings such as  dances, teas, kermeses , but the celebrations of the July festivities were memorable. Added to the celebration for the independence of Argentina, was the careful  celebration of July 14 , the day of the French Revolution, attended and attended by a lot of public, enjoying  high quality shows and the gastronomy that accompanies them.

In 1900 the “Ecole Française de Santa Fe” was created with the aim of  educating the children  of the staff of the Railway Company. The whole community collaborated in the acts integrating performances in live paintings with declamation, music and dances in the  typical costumes  of the regions of France. By merging with the Alliance Française in the 1930s, the school sees an increase in the number of students, so it proceeds to build a new building next to the existing one. Around 1950, a new building was built next to the Petit Château rose. The educational levels and their characteristics are also expanded, offering  French courses for children, adolescents and adults  and a built-in kindergarten, with rooms from 1 to 5 years old.