The Mercado del Patio is a beautiful shopping stroll from the main city of Santafesina. A refunctionalized place that is fair and tourist attraction at the same time. 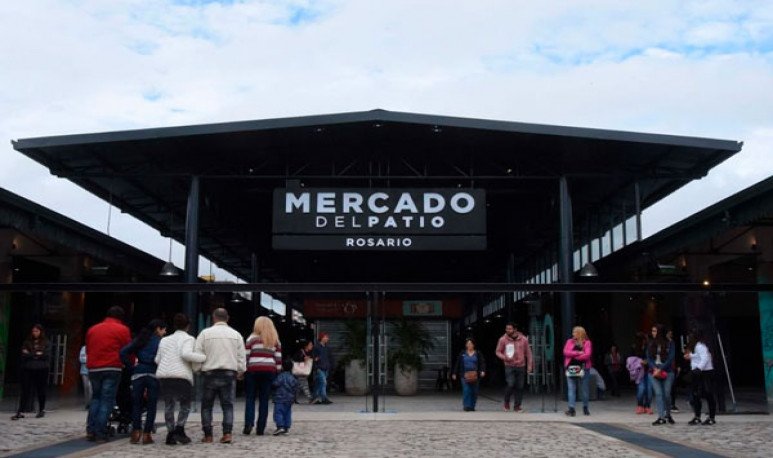 El Mercado del Patio is a space for the  promotion  of economic and cultural development in Rosario and its region. Its central axis is to be a  retail market for food products. It has 30 premises of different areas , mainly food.

Its inauguration involved the reconversion of a building of heritage value, the Patio de la Madera, became an avant-garde gastronomic walk. The Market strengthens the commercialization  of quality and sustainable regional products . The works contemplated the improvement of the green space and LED lighting. The initiative was promoted by the Municipality of Rosario and the Government of Santa Fe, with the assistance of the Argeninta Foundation.

The Market  promotes the use of recyclable bags, fabric or trolley, and has available changuitos to make purchases taking care of the environment . Thus, it reduces the emission of bags and the pollution produced by their manufacture. In addition, it has a special waste container for neighbors and customers to dispose of batteries, used oil, textiles, lamps and fluorescent tubes.

In March 2019 the  commercial premises received the Green Label badge, which shows the presence of good practices to minimize the environmental impact  of the activity. The use of LED luminaires, selling healthy food, local and regional products; and good waste management.

Just six months after its inauguration, in February 2018, the Patio Market became  the first retail market in the country to be part of the World Market Union . Being a permanent member of such an entity, which comprises more than 200 wholesale and food retail markets in a total of 42 countries on five continents, reinforces  international positioning both in the commercial space and the city of Rosario.

You're leaving with the cart full

It is true that  many rosarinos miss the Patio de la Madera,  the name by which the complex that worked for many years in this same property was known. The Patio was one of the most important municipal trade fair sites in the main city of Santa Fe. This space was also an area where important exhibitions, conventions and festivals took place.  But Rosario never loses ground in those areas . Today, all such events  are often developed  in other top-tier sites. And today's  Patio Market plays a key role for rosarinos: fill your shopping cart . There's practically nothing about the storage, food and kitchen items you can't get here. And the fact: not only is it a fair attraction for the people of Rosario. Those who inhabit the villages near this city take advantage of the weekends of a walk in the city to make a good supply of  fresh, handcrafted and quality products that are very difficult to find elsewhere.

If you have any doubts, we tell you just a little about what Mercado del Patio has to offer:  six warehouses , a pastry shop, a bank office, two butchers, two takeaways, a store of cheeses and specialties Santafesinas,  a business of   flowers and plants, three vegetable shops, two ice cream parlors, three bakeries, a pasta factory, a  fishmonger shop , a chicken restaurant, two dietetics,  two restaurants and a cellar.

You will find this market in Calle Cafferata at the height of 700.  Its main entrance is directly facing the central building of the Mariano Moreno Bus Terminal  .