The port of Santa Fe is the area of the city that grew most recently. I knew his latest proposal. 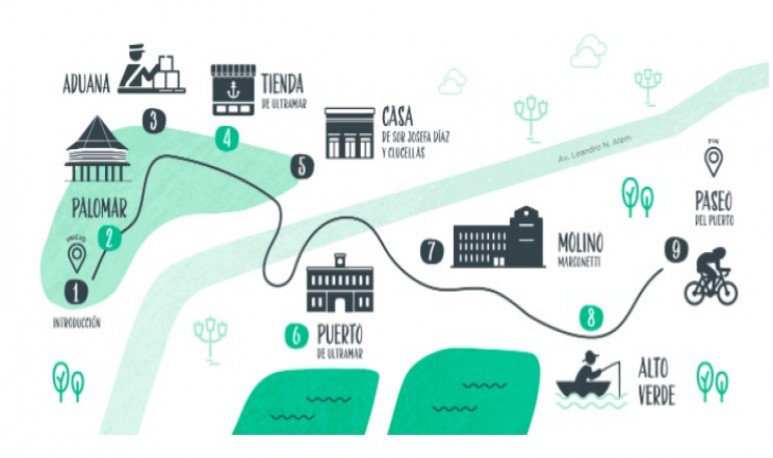 The city of Santa Fe has a new free walk. But, as an additional, you have  the possibility of a guided tour,  coordinated by the tourism area of the municipality. This is the so-called Paseo del Puerto. To take advantage of the guide of professionals are organized excursions from Plaza Colón, better known as El  Palomar  (Rivadavia to 2500 from the provincial capital).

The city of Santa Fe was founded in 1573 with the aim of “opening doors to the earth”, hence it is considered one of the oldest port cities in the national territory. Throughout its 447 years of history  our city had various ways of relating to its Port  and this was always an important part of the economic development of Santa Fe capital.

The port of Santa Fe is, from a time to this part, the area of the city that grew most in tourist and gastronomic proposals. With some imitation of the imposing Puerto Madero Buenos Aires, he came to hierarchize the aesthetic dimension of the city.

In this context, the Paseo del Puerto is one of the new tourist proposals developed for the enjoyment of both citizens and visitors. It is a tour of about an hour that is done with the same modality as several walks that Santa Fe has. This is the proposal  My city as a Tourist , which is pedestrian, free and by postas. That is to say that stops are made in  emblematic places to talk about the history, events and curiosities  of each of them. That is, in the case of resorting to the possibility of doing so, with commissioned personnel. They are identified by the green umbrellas, institutional color of the city.

The Paseo del Puerto proposes to recover all those parts of Santa Fe's history, from its beginnings as a colonial city and Puerto Preciso, to the arrival of large waves of migratory and the emergence of new neighborhoods. It is a tour that shows the stages of urban development and also the coexistence of the city with its natural environment, with the way of “ being riparian ” where water marks the times and ways in which the city grows.

As is a novelty,  so far the municipality organized few guided exits for this tour . But those who wish to make this circuit at another time will be able to do it with all the necessary information using the innovative audio guide system developed by the local state.

The audio guide of Paseo del Puerto is available on the city page,

by entering  this download link . Or you can listen from  Santa Fe Capital's profile on Spotify . It is worth noting that on both platforms are available —in addition to the audio guide of the Paseo del Puerto- others to be able to make guided tours in various tourist areas of the provincial capital, such as:  Paseo Costanera, Paseo Pedestrian San Martín, Jesuítica Apple, Paseo Costanera, Paseo Boulevard, Historic Centre, among others.

Audio guides are  a development of the Municipality  aimed at generating self-management tools useful for citizens and visitors to strengthen commitment as a sustainable municipality, generating environmentally-friendly policies.

the steps Santa Fe takes to grow in  tourism are small but important. Such an important area to get to know Argentina, but  in this city was very neglected, for a long time.   From Ser Argentino we celebrate these decisions that open the doors of a beautiful city to those who visit it.