Home Travel Santa Fe Mihura: a bridge and a lot of history

Mihura: a bridge and a lot of history

The Mihura Bridge keeps great stories between Esperanza and Santa Fe. We remember his golden age. 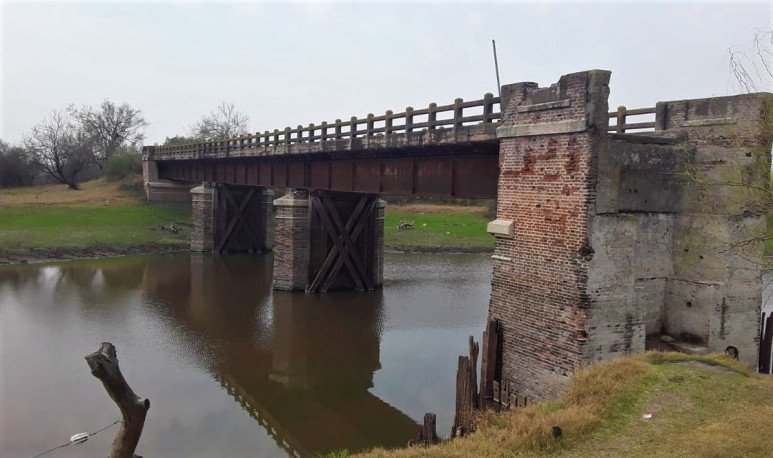 Mihura Bridge is a road connection that passes over the Salado River  in the province of Santa Fe.  He joined the capital city with the country's first agricultural colony, Esperanza.   Numerous events and anecdotes occurred about its structure.

At present,  there are only a few ruins  of this bridge. When the river goes down, they can be traversed. When crossing it (requires climbing), about 100 meters to the East you can walk along a trail covered with thickets leading to  another, smaller viaduct, which served as a relief of the main . Only the braces and some wooden poles were left from this bridge/bridge/bridge.

Since the foundation of Esperanza (1856), the inhabitants of that time chose the Paso de Mihura (as it was known until the construction of the bridge) to cross and reach Santa Fe. In those times they took advantage of the fact that, in this sector, the Salado river makes a meander, that is, a steep curve and was not so deep.  It was therefore possible to cross through his bed without major difficulties.

The thriving colony , 10 years after its creation had about two thousand inhabitants, forced to think about a more accurate connection to the capital of the province. It was then that  Christian Claus (also known as Clausen), a German civil engineer who arrived in the province in 1858 along with three brothers, appeared on stage  . The immigrant settled in Esperanza and with his projects he was part of the foundation of other villages, such as Pilar, Nuevo Torino, Progreso. In 1864, Claus  along with Carlos Müller (another settler) reached an agreement with the Santafesino government to erect a bridge  over the Salado River, connecting the colony with the capital city.

The floods complicated the lifespan of this bridge. This required that,  on several occasions, the authorities should repair the road.   With the arrival of the twentieth century and the appearance of the first motor vehicles in the region, the viaduct increased its drawbacks.

The dangerousness for those who crossed it was exposed in publications of local newspapers of the time.  Those media warned that it was “a danger for those who must travel going or coming from Esperanza.” And they added: “If something is not done, nothing strange would be that at any time a misfortune should be regretted.”

A particular anecdote places  one of the Argentine heroes in the place that is the axis of this note . In 1870, then the president of the Nation, Domingo Faustino Sarmiento , arrived in the city of Esperanza and was “amazed” by the progress in the colonies area. The popular story indicates that the Argentine statesman stopped at Claus's stay glued to Mihura Bridge and spent some time there. As explained earlier this  was an obligatory step between the capital and the provincial west.

Before the founding of Esperanza and the arrival of Claus, in Paso Mihura there was a fight between unitarians and feds. It was October 20, 1840 when General Ángel Pacheco attacked the unitary forces commanded by Juan Lavalle.  The violent episode occurred on the grounds that would later house the estancia, the mill and the bridge  built by the German Claus. Historians agree that it was the feds who imposed themselves in the battle, causing significant losses in Lavalle 's forces.

If you like the history and value of old works that are in ruins, knowing the Mihura Bridge in Santa Fe is a great option.