Second installment of a curiosity in Santafesino tourism: the tombs of the cemetery of Helvecia. 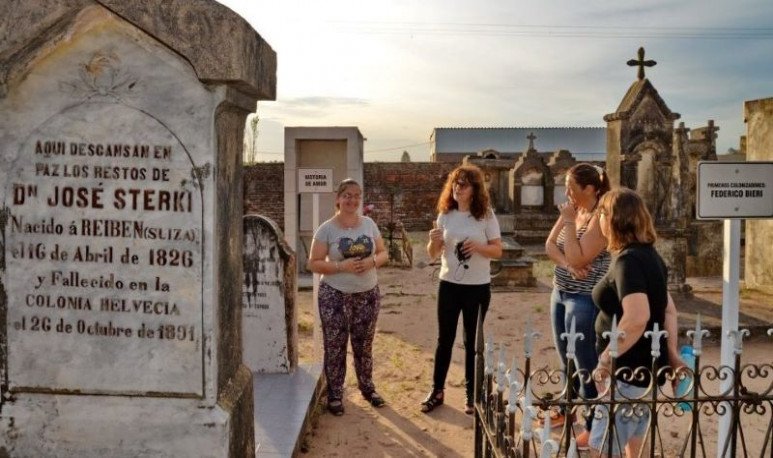 On both sides of the ancient entrance to the cemetery of Helvecia are located  pantheons, which, due to their architecture, stand out.   They belong to the family of whom he was part of the Commission on the disposal of land upon the expiry of the municipality. This man was president of the Committee for Development, member of the School Commission linked to the origins of the school 422 and the Italian Society: Antonio F. Costa.

Next to him, the pantheon of the Antille Family, whose  political participation was relevant , with Armando Antille being  a very politically committed lawyer.   Suffice it to say that he was Minister of Governor Enrique Mosca, national deputy (1924-1928), and national senator (1928-1930), exercised the defense of Hipólito Yrigoyen and then founded the UCR. As a renewal board, they brought General Perón to power.

We also find in this sector Clara Sterki, daughter of the pioneer in naval trade, also the pantheon of the Pibernus-Ferrer family, of important educational work. Later, the pantheon of Ricardo Vigo's family.  They ventured along the rugged roads with the first courier and passenger transport , still without routes, and where is one of their children, the writer Juan Vigo. In front, Francesco Paris who lent his home to form the “Societá Italiana di Unione e Benevolenza”.

In addition to mutual aid institutions, these “gringos” forged artistic groups and dealt with the educational aspect. One of them was Frederick Winkler, who  taught the colonists' children at night in family homes because by day he was another farmer.

There are also the remains of the priest Luis Wagnest, an Austrian who came to the town to administer the sacraments to a vast area populated by Catholic immigrants who were neglected in the faith and had a important political participation.

This necropolis keeps tributes to those who like Von Will and Garrote, gave their lives for a cause, confronting the government in 1893, following the ideals of Leandro N. Alem,  religious images to which the inhabitants make offerings c omo the Saint Lucia carved in the pantheon by the immigrant Carlo Giuponi who died on December 13, 1888.

As a witness to the uprooting in the center itself is the cross major where flowers are still deposited for the absent who rest away from the village, and you can read epitaphs that tell us stories of courage and courage, of love and loneliness, such as that of Juan Senn,  beheaded , Elisa Winkelmann died of a syncope when her husband was being tortured , an army prisoner and Hugo Kanzler with a truncated family.

This space, which belongs to the commune, undoubtedly constitutes the largest tangible historical heritage of the town, and accounts for legends, such as that of María Miño who is said to appear  dressed in white asking for justice, beliefs like Lorenza Basquez's miraculous tomb.

All these stories relate to the history and evolution of Helvecia.   From a colony with port and national customs to what it is today, a horticultural, livestock and fishing area, where institutions continue to operate. They were created by pioneers and where river transport no longer exists. This has been replaced by the terrestrial one, where some institutions have been lost and others have been founded and some are being instituted.

For the people of  Helvecia and the whole region, in the interior of Santa Fe, its history is exciting.   Being able to share it, touring its graves and exhibiting them with tourist value, is your pride.

Helvecia, in the heart of Santa Fe

Helvecia: tombs and history in an exciting circuit

Bahía Blanca: a walk for people with hearing loss

Teatro Argentino de La Plata: a theater for all audiences, but really