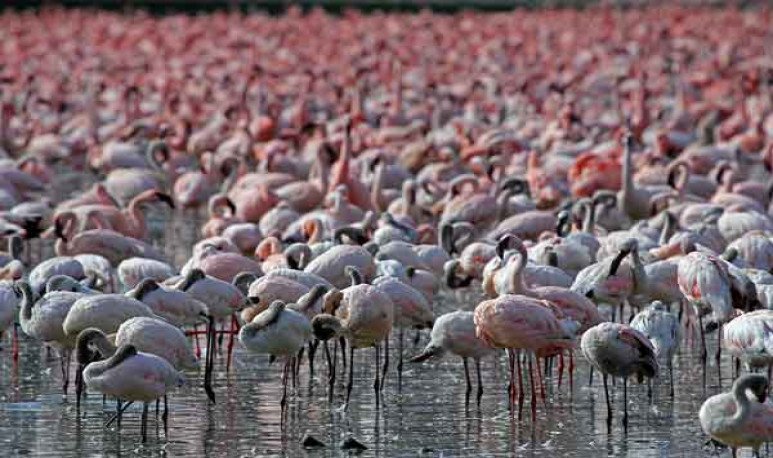 Just 40 kilometers from the capital of Santa Fe, there is a  unique lagoon  called Añapiré. In its waters, thousands of flamingos, spatulas, swans and other species of birds feed and “dance”.

Pink flamenco impresses when flying in flock. This animal, so picturesque due to its color, is the same as usually found in  Mar Chiquita  and other lagoons in Santa Fe. But nowhere  is the landscape as imposing  as here. It happens that the Añapiré lagoon is very rich in a kind of microcrustaceans that are precisely those that give the color to its plumage and that of the spatulas.

The lagoon owes its name to the native languages of the region. Its translation would be something like “shell or skin of devil”. I already received this name in the time of  Juan de Garay.  Looks like the conqueror himself had fields in this area.

The lagoon  is reached only by dirt road,  after arriving in Campo Andino by provincial route 82.

If you are going in summer, you have to wear binoculars or camera with a high range lens, because birds are usually in the center of the lagoon, where  you can see them doing their unique dance . In winter, the numbers of flocks are much higher. Specialists counted more than six thousand!

If you didn't know where you can find, in Argentina, an  expedition worthy of a Discovery documentary  , come to Santa Fe that, close by, you have a wildlife paradise. What yes, be respectful: flamenco is  a threatened species.  Its habitat is continually destroyed, so it is moving from wetland to wetland. Also, unfortunately, they are highly sought after for  illegal trafficking . They are often seen in luxurious parks.

Let us take care of the flamingos , while appreciating the only landscape they offer.