Home Travel Santa Fe A wagon, a station and lots of culture

Reconquista is proud to have restored a wagon that adds beauty to La Estación, its already emblematic cultural space. 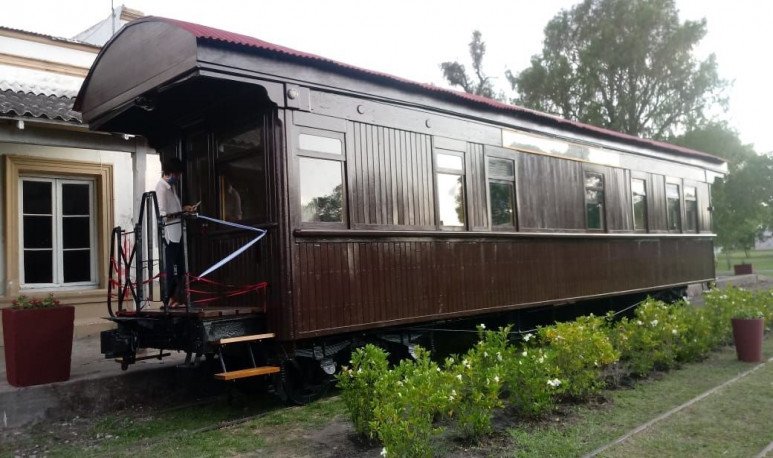 You might have already read, in Ser Argentino, about Reconquista . Beyond being the hometown of Gabriel Batistuta, it is the main town in the north of Santa Fe. That is why many of the legends, recipes and stories of people from Santa Fe that we share on this website, come from Reconquista.

When it comes to offering proposals for tourists,  its attractions are clearly concentrated on its natural environment.  The whole region washed by Arroyo El Rey and El Cristal lagoon is highly sought after by lovers of fishing, water activities or rest on the banks of the river. But because of its urban development, Reconquista  also has other attractions, cultural and artistic.  One of them is the Cultural and Recreational Complex La Estación.

Following a trend present years ago throughout Santa Fe, this place is one of those famous spaces recovered . The old train station was in disuse for many years until the State decided to refurbish it to be a cultural space.  This refunctionalization was reflected in 1999 .Thus, La Estación has been the scene of events of all kinds for many years: recitals, film screenings, school meetings and many others.

With the return of culture in this pandemic end of the year,  El Centro La Estación de Reconquista presents new works  that will further improve the city's cultural proposals. This is the restoration of a wagon that is currently exposed as a testimony to the rich history of the Railway in Santafesino lands.

Culture on the roads

The car that was restored belonged to the inspectors of the railway line.  The restoration  was carried out by municipal staff, with the advice of the association of “Friends of the Riel” of Rosario, and demanded no less than six years  . That's why its inauguration as a historical and cultural attraction was quite a news, in Reconquista.

Historians and the memories of this northern city tells many things about the wagon. It was bought from France in 1890. In principle it was used for luggage and post office, but in 1940 it was modified by placing a bathroom, kitchen and a bedroom for six occupants, with 3 bunk beds. So it was intended for the exclusive use of the company's inspectors.  Contains the weight of 21 tons with a reconstruction as close as possible to the original . This is all the product of research that began in 2013. Barely assumed in that year the mayor Amadeo Enrique Vallejos, he arranged a budget item to reconstruct it and now present it in society.

In line with this true relic recovered, Reconquista stands out another work that is currently in execution. It will be a pedestrian walk that follows the trace of the railway tracks and will travel to the Municipal Camping located on the banks of Arroyo del Rey. “ That is to be very clear about the recovery of public space,” say the inhabitants of Reconquista proudly.

Foundation of the city Reconquista

You have to know this in Merlo, San Luis

With these promos, you have no excuses not to come to Santa Fe.

Tips for going to Valle Hermoso