A neighborhood in Rosario was filled with murals and set up a real street art walk. Messi, feminism and poetry on the walls. 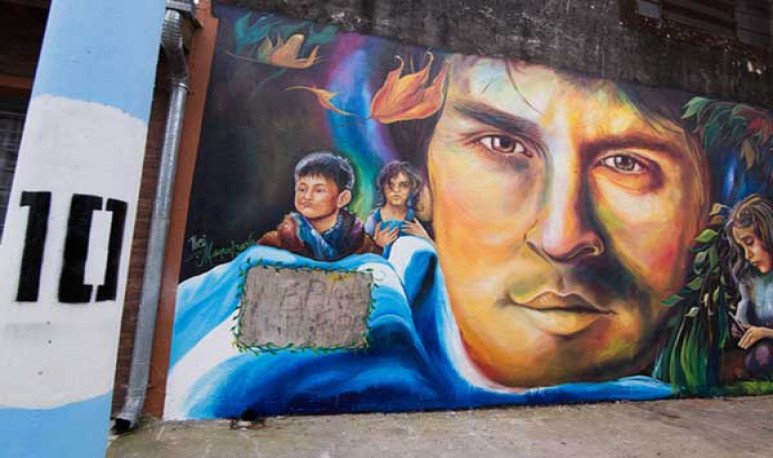 Rosario has a lot of street art.  In different parts  of the main city of Santa Fe you can find paintings by local artists  . In this note we do not speak of traditional paintings, but of works of art embodied in walls of the city. They attract attention for their delicate work with the brush and, in some cases, for their extravagant characters. But there is  a specific area of Rosario  that became something like “the murals neighborhood”. It is the southern district, the area  where Messi grew up  .

It was in the framework of the first International Meeting of Muralism and Public Art “The Future is in Game” that 34 murals were made in that neighborhood. The activity had been organized by the  International Movement of Muralists  (MIM) Ítalo Grassi, together with residents of the neighborhood La Bajada under the auspices of the Municipality of Rosario and the Government of the Province of Santa Fe. Local, national and international artists gathered in the streets that were once visited by  the best footballer in the world .

The works can be seen  within the radius of Uriburu, Juan Manuel de Rosas, Ayacucho and Ibáñez streets . The tour constitutes an authentic open-air museum in the streets that witnessed the birth of a legend.

Art on the streets

Street art is, by definition, all that art that  is done on the street . It's usually illegal though, in cases like this note, not all street art is illegal. This style is made up of both graffiti and thousands of  artistic representations made on the street.

Although this art has become more famous today, in the  90s you could see  works of Post-Graffiti (a more determined way of representation). It was used, above all, to specify and detail the work  carried out by various artists who developed and created a new  mode of expression   through different tÉ cnicas. The cities that are key points of street art are London, Barcelona, Berlin, Sao Paulo and Toronto, among others.

The capital of the province  of Santa Fe also has outstanding pieces  of this artistic expression. Many of them are the responsibility of the same author, who is prominent internationally: Niño de Cobre.

But Rosario , being much larger and with characteristics of a great modern city, has everything to be a capital of  murals  . Every time campaigns are carried out in places of the city that embellish it with this type of art. Recently an artistically intervention was made by a group of dwellings of “Barrio Moderno”. The neighbors faced the deterioration of the housing complex and were part of  a profound participatory transformation  that improved the life of the entire neighborhood. Thirteen towers with murals designed by the neighbors were artistically intervened. In this way, the emblematic   Fonavi  of the West became  a real urban gallery.

If you appreciate the beauty on the streets and plan to go to Rosario,  now you have a date: in various parts of the city, you can see beautiful works of street art.