In the canyon of a Santacruceño river lies the Cueva de las Manos, whose walls and roof beat the history of ancient peoples. 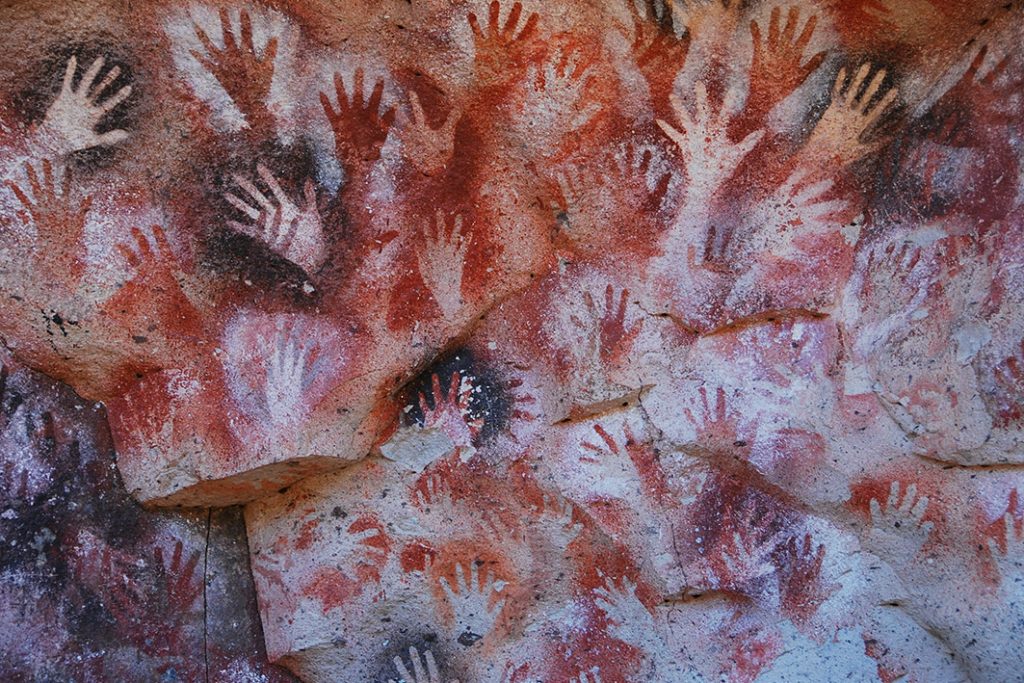 In the canyon of the Paintings River, eighty-eight meters high, a cave keeps ancient history, in a state of unparalleled conservation.Its walls and ceilings are very special cave paintings: it is one of the oldest artistic expressions of the peoples in South America. The Cave of the Manos is a must for anyone who is passing Route 40 through these latitudes. The site is located northwest of the province of Santa Cruz, near the towns of Perito Moreno and Bajo Caracoles.

Arriving at the place, there is an Interpretation Centre and your visit is recommended. The site provides information about the area, the villages that inhabited it and the archaeological tasks that have studied and studied the subject. The truth is that the Cave of the Manos is part of a larger history: in the basin of the Paintings River there are several archaeological sites on both margins.

Among other issues, at the Centre it is possible to learn more about the techniques of rock art.One curiosity about how the peoples left the imprint of their hands is that they were not painted on the rock . The ancient inhabitants lay their palm on the ceiling or walls of the cave and then covered it with paint. This technique is called stencil, and somehow it is inevitable to relate it to the technique of the current stencil. Some 829 starched hands have been calculated in the cave, in some cases overlapping.Most of them are left-handed negatives of both sexes; adults, young people and young children .

The cave is difficult to reach. This is important to keep in mind, you have to have a good physical condition because it is necessary to walk steep roads with loose dirt and stone.

The Cave of the Hands was occupied by hunters gatherers more than 9,000 years ago.The images allow you to observe elements related to your daily life . In addition to the hands, there are cave paintings depicting different hunting scenes, animal motifs and some abstract figures.

The images of the Cueva de las Manos take our breath away, opening almost a window in time that allows us to glimpse other eras and villages from many years ago. Among the animals are identified guanacos and choiques with ease, and there are hunting scenes of these animals. It is believed that geometric motifs symbolically represent the deities of these peoples.

Three different periods in the life of these communities are recognized from thepaintings and archaeological finds. According to Carlos J. Gradin, who devoted much of his life to studying the site, in his first moments the hunters of the Cañadón del Río Pinturas performed mainly hunting scenes for guanacos with very dynamic human figures.

Between 7000 and 3300 years ago a second occupation was recognized. The paintings associated with these moments are made up of the negatives of hands in red, purple red, black, white, ochre and a few in green. The negative was also spread with choiques or guanaco legs .

The Cave of the Manos was declared a World Heritage Site by UNESCO. In 1997, the National Institute of Anthropology and Latin American Thought (INAPL)raised the proposal for this site to be included in the list of World Heritage, which was approved by the international organization .

To be included in the World Heritage list, a site is considered to have “exceptional universal value”. UNESCO declared the importance of the Cave of Hands as a “unique pictorial ensemble in the world” for its antiquity and continuity through time, the beauty and conservation status of the paintings, the sets of negative hands and hunting scenes and the scenery surrounding the site.

Recommendations for the visit

Finally, we want to leave you some tips that the site of Cueva de las Manos, administered by INAPL, recommends to visitors:

We recommend you visit the site for more information.

The Cueva de las Manos is open every day of the year and is really worth a visit.