Villa de Merlo, in San Luis, in addition to having one of the microclimates of the world, has a religious circuit to know 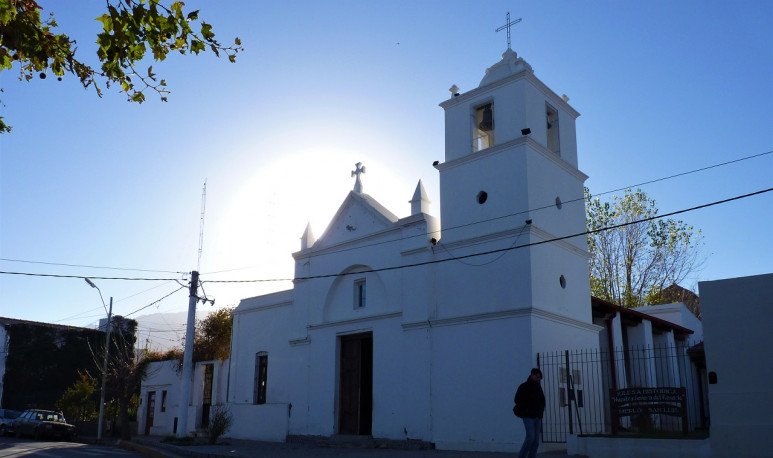 The Camino de la Fe “Costa de los Comechingones” in  Villa de Merlo , San Luis, transports small oratories and very beautiful chapels, always within places of privilege. The circuit includes one of the most popular temples in the province.

Old Chapel Our Lady of the Rosary

This temple and parish seat, was built before the village existed, has been declared a National Historical Monument. Already in the middle of the 16th century it was registered in a catalog of temples. So it is estimated that its construction dates back to 1720, these three centuries of existence, puts it in the privilege of being the oldest chapel of St. Louis. The construction is small, tiny, its interior is simple and stripped of luxuries. Its walls are adobe and as happens in constructions of that time more than a meter thick. Its ceiling rests on carob beams and the floors are large red tiled.

On its south wall it has a short corridor that ends at the access to the bell tower. It is reached by a rickety wooden staircase assembled with the wall, does not have railing. From the old imagery the Holy Christ is preserved, with features of the original peoples. Also the patron saint Our Lady of the Rosary in a dressing room adapted to the effect. Every October 7, the feast of the Virgin, thousands of files gather to worship her.

Shrine Our Lady of the Miraculous Medal

The Sanctuary, blessed in 1984, in a beautiful silver capsule is a relic of Saint Catherine Labouré, who was the religious who received the visit of the Virgin Mary wrapped in a glow, emitting beautiful rays of light from her hands to the earth. The virgin asked her to make an image of her appearance and to coined a medal with her initial letter “M”, and a cross, with the phrase “O Mary, without conceived sin, pray for us that we turn to You” and on the other hand, her image. He also told him that whoever was wearing that medal would receive his protection.

Chapel of the Romero

As in most of Argentina, at the beginning of the last century, families held private oratories that were outside the population centers. The story tells that the youngest son of the Romero family asked for a place to pray and place the paintings he painted. Neighbors began to arrive at the oratory and then the Archbishopric elevated him to the category of public so that masses could be held. A while later it was disused and today a cultural center works there.

Chapel Our Lady of Fatima

This temple has a great architectural beauty reminiscent of the Spanish colonial baroque, dates back to 1945 and its bell tower was a donation from the Argentine television program Sorpresa y Media, in which dreams of people who requested them to production were fulfilled

This attractive oratory has a tiny image of the Virgin Mary carved on a logging branch (a typical tree of the area) which is reported to be found while hatching the tree. The story gave rise to the well-known Romance de la Virgen del Tala, by Antonio Esteban Agüero.

Other shrines that make up the Camino de la Fe de los Comechingones are the chapels Sagrada Familia Cerro de Oro and San Agustín; and the oratories Santa Rosa de Lima and Our Lady of Lourdes.

You have to know this in Merlo, San Luis

With these promos, you have no excuses not to come to Santa Fe.

Tips for going to Valle Hermoso