Home Travel San Juan Where is the Christ of Mercy?

A monumental work made at the foot of the Andes Mountains, we tell you why you have to visit it 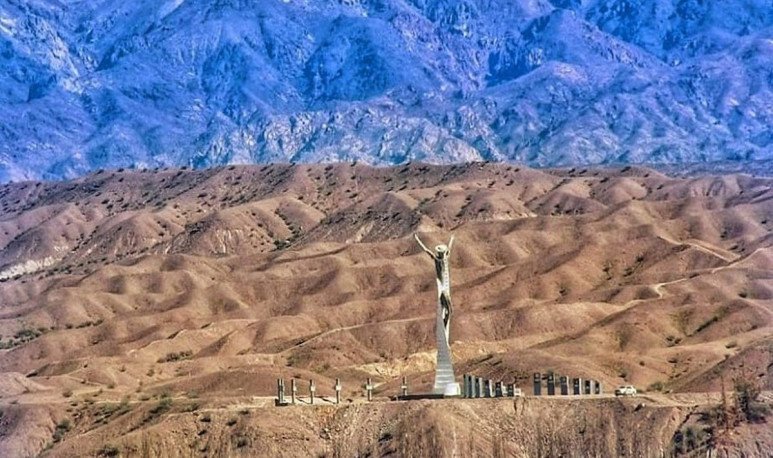 San Juan is a province that rests on the Cordillera de los Andes. For some time now it has incorporated a new attraction related to religious tourism. We speak of the monumental  Christ of Mercy of Calingasta . A structure of almost 30 meters high that, with its arms, embraces all the Sanjuaninos.

Located on a hill 15 kilometers from the village of Calingasta. The vertical axis is held in a column of 33 equilateral triangles pierced by the body of Risen Jesus, who has on his head a crown of thorns that shines especially at night, prepared with hundreds of color combinations.

The more than 600 steel sheets separated from each other at just 5 centimeters and their helical shape give it that sense of upward movement. A clear representation of Jesus's ascent to Heaven.

The Christ of Mercy is framed by the so-called Mount of Mercy. A religious ensemble consisting of twelve crosses reminiscent of the apostles and which, on the other hand, also symbolize the 12 localities of the department of Calingasta. There is a cross where the Christ rests. And a circle where the words of Jesus are included before he died.

We recommend getting there long enough to inspire the landscape. And see how the sun leaves its mark in the shadow that the Christ of Mercy leaves in the square.

The 35 ton Christ has a modern and original design of laminar sculpture, designed by Juan Diápolo and Rodrigo Marinelli. Its assembled iron plates give the feeling of movement of the sculpture that constantly changes according to the position of the sun.

Other activities to carry out

The Calingasta Valley is surrounded by the foothills and Andes mountains that dazzle with its wide views. The Mercedario Hill can be seen from there.

The favorite sport in this Valley is car racing. Thanks to the wind that unfolds in the Pampa del Leoncito, the sailing car takes speed and is lost on the horizon. This plain, 12 kilometers long and 5 kilometers wide, is a sandstone desert that brings together wind-loving sportsmen. We recommend waiting for the sunset to feel the cosmos falling in front of your eyes.

Almost 40 km south of the Villa Calingasta, bordering the stream of Los Patos, is Barreal. The place offers horseback riding on mule or horseback between poplars and willows, mountain bike tours and river rafting.

Another place here is   El Leoncito National Park  , which preserves the local flora and fauna, you will observe guanacos and hopefully some puma coming down from the mountains. It also houses two observatories that can be visited to enjoy the Calingastin sky.

How to get to Christ?

From the provincial capital on the RN 40, then take the RP 436 and RN 149 towards Calingasta. In the villa take Avenida Argentina towards Camping Municipal Villa Calingasta.