Home Travel San Juan Everything you need to know about Ichigualasto

Everything you need to know about Ichigualasto

In San Juan there is a place where nature and time have been doing their work millions of years ago. Ischigualasto is much more than history. 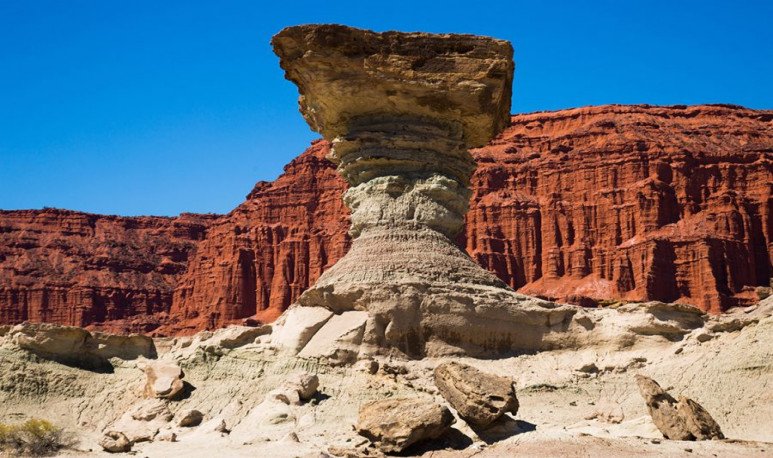 The Ischigualasto Provincial Natural Park   is a World Heritage Site and hides millions of years in its reddish landscapes. Located in the northeast of the province of San Juan, about 300 kilometers from the capital and 75 from San Agustín del Valle Fértil, which is the place where excursions leave to know it. Ischigualasto, means in Quechua”   the place where the moon rests   “.

Hence the park gets its nickname: Valley of the Moon. It is clear that the name given by the natives comes from otherworldly geological structures that dot the landscape. Millions of years ago, this area was a plain dominated by heavy rains and rivers. In the time of dinosaurs, these rock deposits formed slowly over time and have been maintained since then.

Some of these stones are as round and smooth as balls due to the constant wind that has formed them through erosion. Among the stones, the trunks of giant petrified trees attest to the rich vegetation that once fed equally giant creatures walking among them.

Many are wondering why to meet him. The answers are many and do not end up in the beauty itself that keeps its landscape, no. Visiting it makes us feel so small in front of existence. The guided tours in this place will make you understand a little more about how planet earth evolved and how little things have evolved.

The fungus, the submarine, the parrot and the Alladin lamp, are names that have been given to the strange and irregular grayish-green rock formations found here. They were formed by the constant action of the wind that, like a crazy artist, sculpted strange forms over a period of millions of years.

Inside the Park the main circuit, which is run only by vehicle and with the company of an authorized guide, takes 3 hours long. During the tour there are stops to take pictures and specific sectors where the guide will show and tell them about Ischigualasto.

The Ischigualasto Provincial Park is located in the northeast of the province of San Juan, and the departments of Valle Fértil and Jáchal; and borders the province of La Rioja to the north, we leave the routes according to where you go by car.

North:   From La Quiaca (Jujuy) going down RN 40 you reach the province of San Juan directly and in the town of Jáchal tomás the RN 150 to the East that takes you directly to the Ischigualasto Provincial Park.

This:   If you go from Córdoba you can do it by RN 38 to the north to the town of Patquía (La Rioja) and taking RN 150 the West to get direct to Parque Provincial Ischigualasto.

By clicking here you will access the official portal of the Park for information regarding the purchase of entras for your entry.