The wine tourism circuit starts in the capital of the province and crosses the historic villages of the Lerma Valley, and culminates in Cafayate. 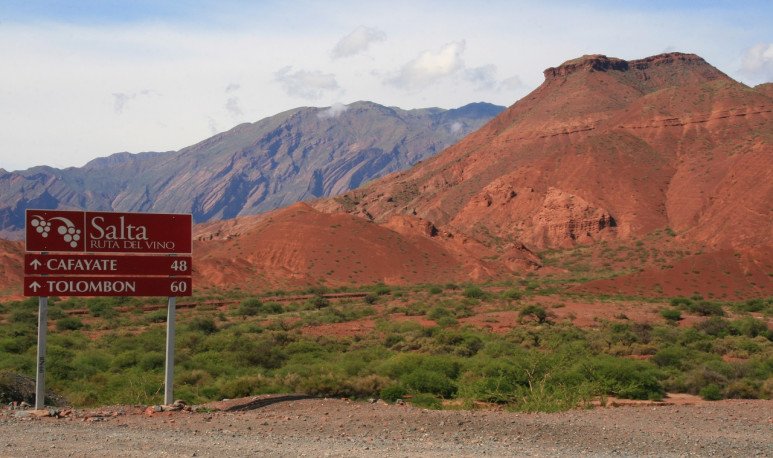 The Salta wine route crosses very striking landscapes such as those of the ravines de las Flechas and the Conchas and centuries-old villages such as Molinos, San Carlos, Seclantás and Cachi, with a huge cultural wealth expressed in music and handicrafts. The variety of colors in its mountains, typical villages and the warmth of its people transform it into something magical.

The wine tourism circuit starts in the capital of the province and crosses the historic villages of the Lerma Valley. After Chicoana, when the Lerma Valley is behind, the Quebrada de Escoipe and Cuesta del Obispo take us to the Calchaquí Valley which, at 2280 meters high, shows the town of Cachi, next to its snowy. In the latter, land of the calchaquíes, are the vineyards that, like Seclantás, produce artisanal wines.

And then Molinos, a village of the 17th century, where in addition to tall and artisan wines, we find a reserve of vicuñas, the ruins of El Churcal and Hostal de Molinos, residence of the last Spanish governor of Salta.

Later, Colomé, where the vineyards ripen at 2400 meters high, place where the Cabernet-Malbec variety are produced, and fruity wine.

And the route continues through Angastaco, San Carlos and Animana, village where Virgilio Plaza, in La Perseverancia, plants the first French variety. And finally  Cafayate , surrounded by white sand dunes, vineyards and wineries. In October, the Torrontés Festival is held there, organized by the winery La Banda.

This is the highest wine route in the world. It has a dry and temperate climate, large thermal amplitudes, optimal for the cultivation and production of torrontés and other strains such as cabernet sauvignon, malbec, tannat, bonarda, syrah, barbera and tempranillo. The geographic characteristics and climate give the local wine a great character, strong personality and high quality with fragrances, colourful and unique flavors that win worldwide recognition and awards.

Torrontés is the perfect combination between man's inspiration and work, soil and climate of his place of origin. The valleys have very special terroirs that, thanks to their excellent conditions (height, soil, humidity, thermal amplitude, etc.) provide typical and differential attributes. This combination of factors is ideal for the development of the torrontés strain with a sweet, deep and fruity taste, which has managed to win countless gold and silver medals in international competitions.

• Aroma:  the characteristic perfumes are reminiscent of roses, white peaches and the aroma of Torrontés grapes are always present.

• Flavors:  Orange peel, white peaches and fruit salad are present on the palate, which make torrontés appear like a sweet wine, although it is actually a magnificent dry wine.

In the 18th century Jesuits brought the first vines from Peru, which took root 20 kilometers from Molinos in the farm La Bodega, today La Angostura, where 200 hectares of vineyards were grown, now disappeared.

After that first experience of the Order of Pope Francis came, in the middle of the nineteenth century, immigrants. The first wineries were La Industria, El Recreo, La Banda and La Rosa, all in Cafayate. In Tolombón, in the south of the province, one whose owner has a name with history in Argentine viticulture, Gabriela Torino de Michel, was installed.

Between 1910 and 1930 the Michel family bought the cafayateñas wineries. From there, the history of Michel Torino wineries begins, and their renowned high altitude wines. Over time other farms with vineyards were installed in the province. The area has unique particularities for growing the vines. Altura, slopes on the ideal grounds for runoff that added to stones and sand puts the right ingredient to produce unique wines.

Source:Secretary of tourism of Salta

We offer you this package to Cafayate to tour the heart of the Argentine torrontes, click here