Alemania is a place that will make you travel to the past, where its waterfall will offer you a rest so you can enjoy. 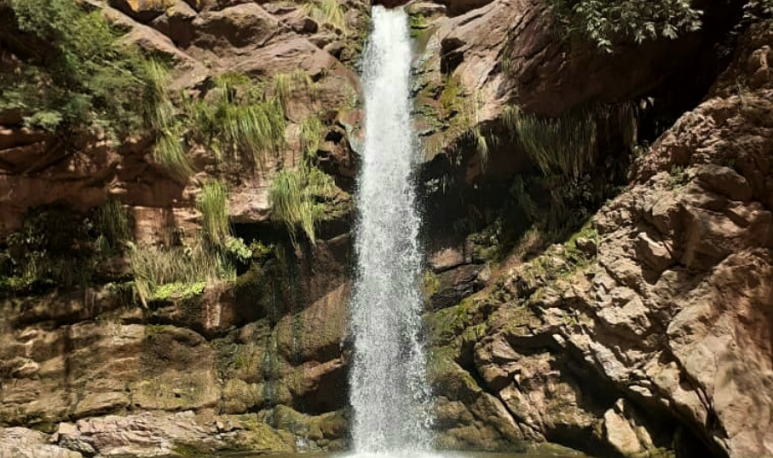 Near Cafayate is Alemania, a railway village that has an old train station, a small craft fair where locals offer their crafts made of wood, alpaca and clay, and bordering the river begins the most attractive of this place which is the   Cascade of Germania   , with a water drop of 15 meters high. This natural wonder is surrounded by a variety of plant species such as cacti and carob trees.

The town of Alemanía is 99 km south of Salta city and 21 km from La Viña. Tourists can be reached by car on the RN 68 which also from there you can access the Quebrada del Rio Las Conchas. Also, to get to this town you can take a bus that leaves the Salta Terminal. Many tourists who decide to travel to the Cascada de Alemania carry tents, mattes and some food to spend the day, others choose to make a reservation at a nearby hotel. In this context, it should be noted that every year in August the Festival of Pachamama is celebrated in this town.

To begin the journey towards the   Cascade of Germania   you must enter the Finca Palacios, where you have to ask for permission to access. The entrance to this farm is located behind the Alemania Train Station. The distance to travel is about 7 kilometers following the river of Las Conchas, which requires a few hours walk. In this charming prank tourists cross the railway bridge to cross the river, although it is not a dangerous trekking you have to be very careful as you have to climb some rocks. Finally you reach the waterfall, a magical place where you can feel the freshness of nature that offers a real rest.

The village of Alemania, had its boom with the railway, the station belonged to the C-13 branch, which shone in the last century. Travelers going to the calchaquí valley traveled by train to this place and from there they continued by bus on the road to Cafayate. The station operated until 1971 and when the trains for that area were suspended, the village was abandoned and now there are only a few houses where relatives of those who saw the rise of the village live. But over the years the station was conditioned and became a very attractive place in terms of tourism as it became a quiet place, perfect to enjoy the sound of nature, sit on the bank of the river and share some mattes with friends and family.

With regard to the name of the place, in Salta there are stories about the origin of Alemania. There are records that in 1635 there was a stay with that name. On the other hand, there was talk of some alleged German aborigines, while others attribute the name to the nationality of the engineer who brought to that place the railway tracks, he is a German who gave life to that village.

Lastly, in Germany there were warehouses, fondas, hotels, post office, police office, and warehouses where parcels were kept that came down from the wagons by wheelbarrow. At that time, 200 people lived, and swallow workers filled the streets and slept in the seasons with seasonal changes.

When it stopped passing the train in 1971, after a while Germany became a tourist place where visitors from different parts of the country arrive in the summer season to the German Waterfall. In this way, the village ceased to be a ghost town, as they called it before when its inhabitants had decided to leave when it stopped passing the train, to now be a place that is admired by the nature that surrounds it, where its magic captivates tourists visiting the place.

The three parks in Salteños that you have to know

Why are Salta highly rated by travellers?

El Palmar, where the paths of peace take shape

Victoria, a walk from other times