The Historical and Religious Circuit of the City of Salta offers a tour where the most important churches are visited due to their religiosity and history. 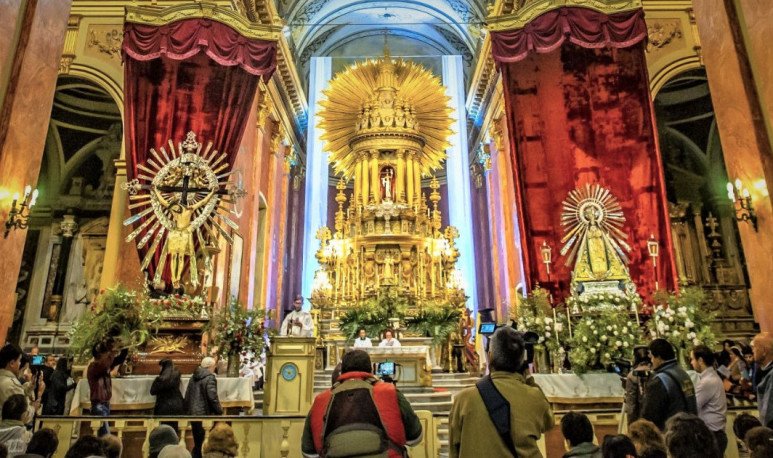 Salta is a place to visit when it comes to sightseeing in Argentina. In particular, the capital of this province of the North of Argentina is full of history. The municipality offers tourists a guided tour that takes place every Saturday of the year, with different themes according to the liturgical time.It
all begins in the Cathedral Basilica of Salta founded in 1582 and rises on the site destined for the construction of the Matriz Church according to the minutes of its founder Don Hernando de Lerma. It is home to the Sanctuary of the Lord and the Virgin of the Miracle, witnessing every 15 September the massive procession that takes place in honor of the patron saint of the city of Salta. This place surprises with its artistic expression, but above all, by the welcome it offers to tourists and pilgrims who visit it.

The San Francisco Complex belongs to the Order of Friars Minor founded in 1209, by the hand of Saint Francis of Assisi. The history of this temple also began in 1582 with the construction of the primitive temple and convent, but it is in 1857 that the Order regains greater life with the coming of missionaries Italians.
Most of the Franciscan brothers, coming from Italy, arrived with a trade they offered at the service of the house. They made the tiles, the stonemasters, the fittings and the casting of the bronze from which they made the bells. They also had an orchard, a tailoring shop, the production of oyps and a printing press where they made replicas of incunables and the production of the newspaper “La voz Seráfica”.

Our Lady of the Valley of the City of Salta

Belonging to the Order of the Immaculate Conception of Mary, the Chapel was built on a land donated by the marriage Vital Olmos and Jovita Méndez de Olmos. It was originally intended to house the image of La Virgen del Valle and also to operate a shelter for poor children, called “Señor del Milagro and Virgen del Valle”.
In 1893 Father José María Hinojosa laid the foundation stone for the future sanctuary. Hinojosa took out a mask from the image of Nuestra Señora del Valle and made two replicas: one was left in the Candelaria Church of La Viña and the other was located in this new temple dedicated to the Virgen del Valle. The image arrived in Rome at the initiative of some faithful devotees and was blessed by Pope Leo XIII. It was opened to public worship in 1911. The asylum, which had been opened nine years earlier, had workshops in carpentry, tailoring, footwear, music and painting.
In this sense, the best trainers were sought, among whom the artist Arístene Papi was hired, who taught drawing classes at Colegio León XIII (first place to teach painting on easel and murals), and with the help of his students he painted frescoes inside the temple that was preserved to the present day.

San José Church in the City of Salta

Father Isidoro Fernández, author of the novena of the Lord and the Virgin of the Miracle, inaugurated it in 1864. Its construction was made with the materials remaining from the work of the San BernardoConvent . In 1973 it must have been closed because of a precarious state. Years later, its restoration began under the direction of the Archbishopric of Salta.

Our Lady of Candelaria — La Viña

Nuestra Señora de La Candelaria, known as La Viña, occupies the site of a hermitage of Señor Nazareno , which was a cemetery for Spaniards. In the second half of the 18th century, the neighbor Manuel Martínez enlarged and decorated it properly, but in 1799 it had a dilapidated state and the butler Enrique Paz collected funds for its repair.
In 1836 Doña Teresa de Jesús Cornejo undertook a alms tour of Bolivia and Peru asking for donations to continue the work of the temple. His horseback ride was done in the company of the Virgin of the Sentadita Rosary, whose body had been modeled to fit the horse.

After Independence, the Mercedarian Fathers gradually moved away and the Church that served as a parish was attended by the Redemptorist Fathers, unfortunately, instead of being preserved, the temple was destroyed at the beginning of the 20th century.
In the building first functioned a private school of priests called San José, then it was National College and now Escuela Zorrilla. But the Salteños lovers of the Virgin of the Mercedes acquired a land on Caseros Street and in 1907 the current temple began to be built. The demolition of the previous church caused the dispersion of its images, some of them being found in museums.

Sanctuary of Perpetual Socorro San Alfonso in the City of Salta

Also belonging to the Order of Redemptorist Missionary Fathers, those who arrived in Salta in 1886 and settled in the old Church of La Merced and from there they missionary on horseback through the Calchaquy Valleys.It is, San Antonio de Los Cobres, Rosario de La Frontera, La Caldera and Oran, impaling their tasks with Jujuy and Tucumán. The help of the parishioners and their resolute action allowed the construction in 1894 of a primitive temple of San Alfonso, which was eventually expanded and reopened in 1911. In 1957 the Archbishop of Salta, Monsignor Roberto Tabella created the Parish of Our Lady of Perpetual Socorro and San Alfonso.

Things to know about Intiyaco