In the province of Neuquén is the highest bicentennial monument in our country. 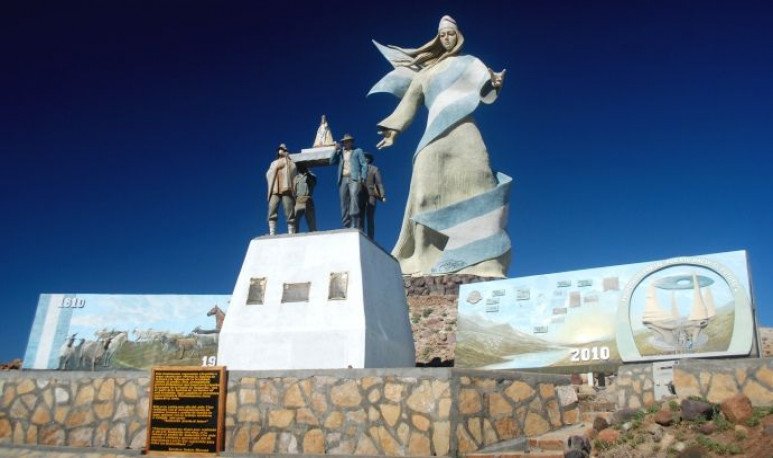 Andacollo is a village in northern Neuquino, which offers visitors a wide variety of options that combine history, culture and activities in contact with nature. Valleys, mountains and hills such as Huaraco or Sentinela, which surround the city, with beautiful hiking circuits or for mountain biking. In this town the monument to the Bicentennial of the Patria and the Centenary of Andacollo was inaugurated in 2011. The work took two years of construction and whose execution was carried out by Santafesino sculptor Andrés Mirwarld. It is a sculptural group that symbolizes the feminine image of the Fatherland covered by an Argentine flag. His hands are extended towards the city of Andacollo and under it are two murals of the Bicentennial and Centennial.

The work, 18 meters high and is located on top of the Cañada de las Cabras hill. It is the largest sculpture ever built in the province, made entirely with materials from the area, and the highest one dedicated to the bicentennial of the homeland. Along with the sculpture Mirwald, who died in 2016, he joined crianceros, miners and first settlers of Andacollo, and four of them carry in andas  Nuestra Señora de Luján , Patroness of Argentina.

What else to see in Andacollo

Andacollo, in Quichua language means  brilliant high  in reference to the gold existing in the area. The town is part of the Neuquén Norte Tourist Corridor. In fact, the city began as a mining settlement, activity that is no longer performed on site. Lovers of salmonid fishing have in this locality, of just over five thousand inhabitants, three rivers ideal to do it with the fly mode. Neuquén, Nahueve and Lileo await those who want to enjoy their crystal clear waters.

Watching flora and fauna, particularly bird watching, is an ideal activity to practice in the surrounding lagoons and streams. Cauquenes, bandurrias, variety of ducks, swans and flamingos can be observed all of them fed in the water mirrors of the region. In January the traditional Summer Festival is celebrated, it pays homage to the breeders of the chivito of northern neuquino. These are cared for with ancestral techniques that are passed on from parents to children. This product has purchased the Designation of Origin, which guarantees export. In any gastronomic place in Andacollo you can taste, from Ser Argentino we suggest eating it  on the flame.  The work of stowing animals towards the summers is an activity in which tourists who are staying in estancias in the area can participate.

3 must-see places in the north of neuquino