We tell you the neuquine volcanoes that break records. 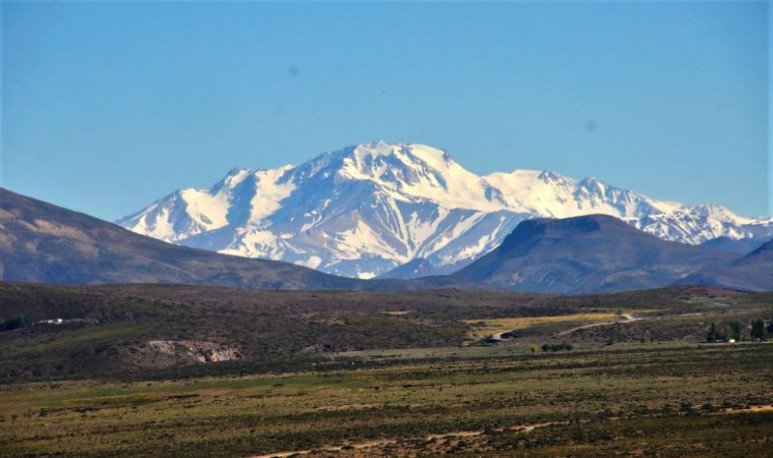 In this second part of Neuquino volcanoes, we tell you which is the most suitable for skiing, the highest in the south and the most dangerous in the country.

The Batea Mahuida volcano is a great natural attraction  near the urban area of Villa Pehuenia- Moquehue . It is part of the territory of the Mapuche Community and the  Araucarias are presented along the road in different sizes.  In summer this area functions as a large stroll and tour space, managed by the Mapuche Puel Community. Its access is located in the middle of the road that connects Villa Pehuenia and Moquehue. After traveling a few kilometers uphill you will reach the Batea Mahuida Snow Park which runs in winter with excellent snow quality, suitable for skiing.

Following the road, you will reach the  Mirador de las Antenas. A natural viewpoint that offers a unique panoramic view,  is the characteristic photo of visitors to this mountain village, as it includes in its visual the beautiful natural landscape of Villa Pehuenia-Moquehue with its two lakes Aluminé and Moquehue, peninsulas and islands, the strait river La Angostura that links these lakes, the lagoons and their forests within other circuits, the Andes Mountains in the background, the rising valley of the Aluminé River and the Chilean volcanoes Villarica and Llaima next to the imposing Lanin volcano.

Resuming the road  you reach the heart of the volcano . A lagoon in the crater of the Batea Mahuida invites you to explore its coast and also to encourage you to go on top. With a walk that requires a great adventurous spirit  you can reach the highest, 2000 meters high.  As the ascent takes place, Chile's lake Icalma begins to peep, with its village of the same name on its shores.

DOMUYO, the roof of Patagonia

Thanks to its  4,709 meters above sea level, Domuyo is considered the highest mountain in Patagonia . It belongs to a protected area that is in the north of the province of Neuquén, in the  Departments Minas and Chos Malal.   From the city of Chos Malal, access occurs through Provincial Routes Nº43 and 39.

This earth and rock colossus, whose  name comes from the Mapuche language and means “that trembles and rezonga ”, is part of the area known as the  Cordillera del  Viento , which runs parallel to the Andean cordon , but within Argentina and which lives up to its name by the winds that eventually turn and destroy tents in the camps on their way to the summit.

To make the expedition to Domuyo,  you must leave from the village Varvarco and the estimated time is nothing more and no less than six days

Due to its constant activity, it  rankea as the most dangerous in our country . It has a dozen craters, concentrating the recent activity in the  crater called El Agrio , which presents permanent fumarolic activity and an acidic lake inside. In its geological record there is also evidence of fissure activity, and domes of rhyolithic lava.  It has permanent glacial coverage and, because of this, is a potential generator of lahars  that can reach extensive distances through both Chilean and Argentine valleys.

At the foot of the  volcano  is one of the most touristic places in  Neuquén  ;  the a town of Copahue, which houses a complex of  hot springs  that are internationally recognized for the quality and diversity of its waters , whose therapeutic properties are endorsed by the World Organization of the Health.

These are the most important volcanic formations in Patagonia, and they are in Neuquén.  It is recommended to take advantage of summer because it is the best time of year for volcanic excursions.

Copahue, visit him before the snow covers it.