In the Neuquina town of Añelo they found a fossil that could beat the record among the giants. 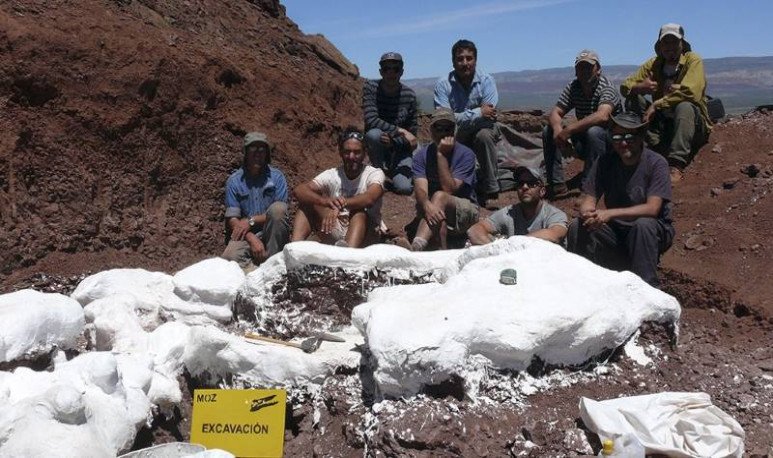 The province of  Neuquén  is known for its paradisiacal lake beaches immersed in wooded mountains. In addition, among the main economic activities, Neuquén has one of the largest oil and gas  extractive industries in the country. Sierra Chata deposit  , fossil remains that could be a new brand in the provincial registries.

The remains of the titanosaur found would correspond to  the largest terrestrial animal in history , according to the survey of Conicet specialists. The estimated time dates back more than 98 million years ago and it is assumed that their presence occurred mostly on our continent.

Patagonia is renowned for being the place where these giants called  Titanosaurius lived. The families that have left the most fossil record are the Patagotitan, Argentinosaurus, Puertasaurus and Notocolossus, the latter with a 1.76 m long humerus . The body masses of these animals are estimated at a maximum reached of 70 tonnes.

The necks over 12 meters long and small heads, are among the main characteristics of these herbivores. The Coordinator of the Museum of Natural Sciences of the National University of Comahue and the Science Museum of Añelo, Juan Porfiri, gave other details about the particularities of the new fossil: “the characteristics of the remains indicate  certain particular forms of the tail, it is a quadruped, herb ivorous, with rare characteristics.”  A report published in the journal Cretaceous Research, presents the discovery as “a  giant titanosaur sauropod from the Candeleros Formation in the province of Neuquén , composed of an articulated sequence of 20 more anterior flow vertebrae, plus 4 posterior and several appendicular bones”.

In addition, Porfiri added that “In Neuquén where explorations are done in Vaca Muerta, it is a  desert area with few trees, and many oil companies carry out excavations, so it was Pampa Energía that found the fossil materials  and makes them known to the heritage management, who communicated with us to make the rescues,” he reported in a report with La Voz de la Ciudad, local television channel.

“This titanosaur would be  100 million years ago and they serve us to make comparisons with others  and these are quite similar materials to those in Africa,” said Porfiri. The Patagotitan mayorum, was considered until now the largest  dinosaur  and is who this new fossil would break the record. The materials found are housed in the Museo de Ciencias Naturales “Prof Dr. Juan Olsacher” in Zapala, under the Provincial Directorate of Mining of Neuquén.

The province has one of the most complete paleontological museums in the country   .  Largest herbivorous dinosaurs found, the Argentinosaurus Huinculensis.

This finding proves once again, that  Neuquén is not only beautiful lakes and oil .

Credit of the photos: Telam