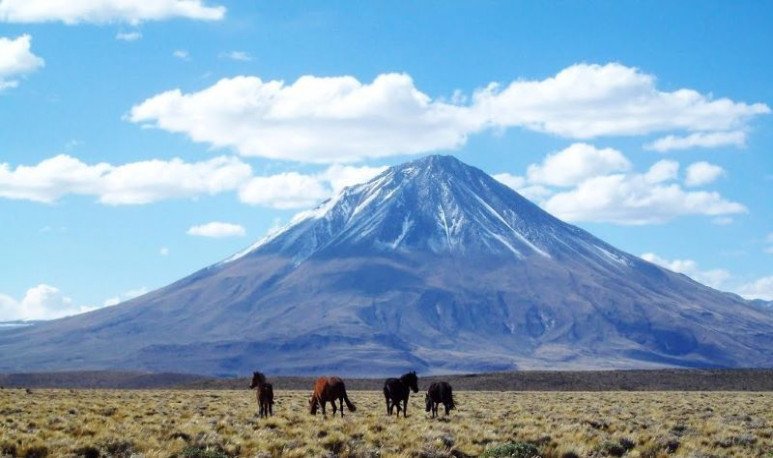 When you talk about volcanoes in Argentina, you usually think of the north and the imposing mountains.  World records held by the formations located in Catamarca make Argentines little know that in the south of the country, there are also volcanoes.

Neuquén, known for its lake beaches and paradisiacal resting places, hides the secret of hosting  more than 7 volcanoes in its territory.

In this note, we introduce you to some of them.

LANIN, the most symbolic

El Lanín is a stratovolcano considered active, located in southern Chile and Argentina and has an altitude of 3776 meters above sea level. For the first time, in historical times,  activity was detected at the  volcano  from 15 February 2017  as a result of seismic movements inside it. It is located in the Huiliches department, near the city of  J  unín de los Andes , province of  Neuquén , surrounded by Lakes Paimún and Huechulafquen to the south and Lake Tromen to the north, and  gives its name to the park that contains it (Lanín National Park).  In addition to the lakes, its beauty is also given because it presents  large glaciers on its southern face.

The volcano has an international tourist attraction especially for  high mountain sports activities.   Its ascent is relatively simple and is regulated by the Argentine National Parks Administration and National Gendarmerie.

It is the symbol of Neuquén, forming  its main image of the provincial shield and its anthem.   Its social value is an emblem, granting it to Mapuche communities for  whom it is a sacred site. It is also recognized and accepted internally as a unifying icon of that society and outwards as representative of the community.

TROMEN, the imposing and gloomy

With 4,114 m high, it is located within  El Tromen Provincial Park , in the northern region of the province of Neuquén. This volcano is one of the most outstanding aspects of a region that, in recent geological times, was affected by intense volcanic activity. The imposing Tromen, with its striking lava and slags spills, along with other minor volcanoes in the area, allow the visitor to appreciate an instant photograph of the magnitude of these effusive events, some of which took place in historical times. On the basis of chronicles and written documents 5 historical eruptions are known (1820, 1822, 1823, 1827, 1828), although none of them have been confirmed by radiometric/geological studies .

Its summit is cut by two overlapping boilers 3.5 km in diameter. The Black Volcano del Tromen (pleistocene), with a 5 km wide caldera, is immediately north of the Tromen, and lava flows from this have partially covered the northern edge of the caldera.

The marks of the passage of wind and lava gave the Tromen a  dark look from parts, which pretends to be a constant shadow on his body.

CUTADERAS, the small and southernmost.

Puesto Cortaderas is a  small isolated volcano located in the extra-Andean area of the province.   The volcano corresponds to a slag cone. It is the southernmost active volcano in the southernmost Holocene volcanism area of La Payenia. What in Creole means that,  of the newest volcanoes, it is the most southerly in the world . It is located 60 km southeast of Tromen volcano and the same distance from Chos Malal.

It is a  group of young basaltic volcanoes located in Argentina , close to the Chilean border, south of Lanín. The group of volcanoes reaches 2139 meters above sea level and consists of a series of stratovolcanic chimneys originating during the Pleistocene period. The  Achén Niyeu is one of these fireplaces and means “place that was hot”.   Its name is due to the  large eruptions that this volcano had  in the past, the last of them just about  200 years  ago and formed a large  lava wash over 7km long that reaches the shore of Lake Epulafquen.

Also known as Escorial, it is part of the stratum volcanoes chain that culminates in Huanquihué (2189m).   The Achén Ñiyeu is located on the side of one of the sections of the so-called Andina Huella,  a path that in 16 days takes a long journey from Lake Aluminé, in the province of Neuquén to Lake Baggilt in the province of Chubut.