This is an open-air scientific, educational and tourist site that depends on the National University of Comahue. 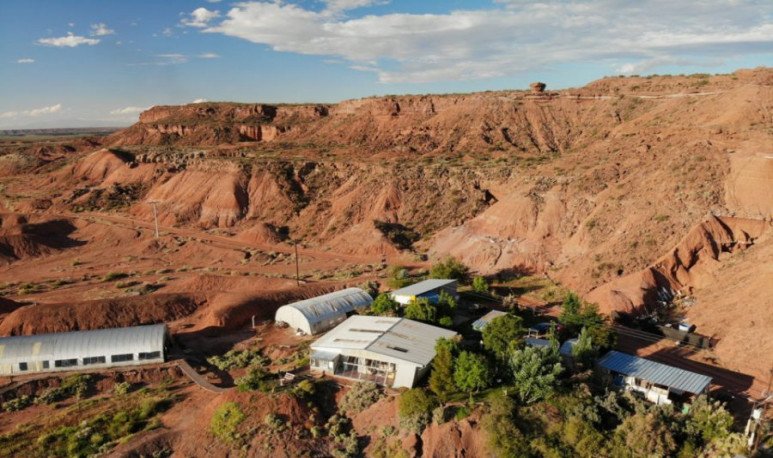 The  Dino Project , the  only terrestrial ecosystem of the Upper Cretaceous in South America,  opens its doors again to the public after five years in Lake Los Barreales, 90 kilometers from the city of Los Barreales  Neuquén , where visitors may have the feeling of being paleontologists for a few hours or a day among thousands of pieces of vertebrates and vegetables, reported from the Ministry of Provincial tourism.
On site, open to the public from Tuesday to Sunday, and which is located at kilometer 65 of Provincial Route 51, you can see the work in a 90-million-year-old fossil ecosystem, from digging a dinosaur to when it is mounted in a museum.
It is an open pit scientific, educational and tourist site  that depends on the  National University of Comahue  and aims to rescue from the rock all dinosaurs and remains animals and plants that inhabited the Lake Barreales area millions of years ago.
This “hole in geological time to see the past,” as described by its director, paleontologist Jorge Calvo, contains about 1100 fossil pieces of vertebrates and about 300 plant remains and other freshwater bivalve molluscs.
“ The province of  Neuquén  has benefited from fossil findings and work that began some 30 years ago.  Paleontology  has resurfaced many localities, several museums were created and that has generated changes in these places where they do not have the advantage of having a forest or a lake,” he said. the professional.
Calvo described the  fossil  remains found in recent years in the region as “among the best in the world, for the quality and characteristics of the species, and for the characteristics of the species, and indicated that with each finding it is possible to know who lived, how they lived, what the landscape was like, and whether there were plants, flowers or insects in the ecosystems. That's why we know that millions of years ago Neuquén was a jungle.”
The paleontological site Lago Barreales is located in the central eastern region of the province of Neuquén, in the area of Loma de la Lata, on the north coast of the artificial lake that gives its name to the place.
Visiting hours are from Tuesday to Sunday , with guides that take place at 10.30 and 15, and also has a Geotourism Experience service for one or two days.
The circuit lasts from two and a half hours to three hours of travel, and has a rate that varies between 250 pesos for the general public; 125 pesos for retirees; and 500 pesos for foreigners.

Herradura: the new life of tourism in Formosa

7 tips for outdoor activities in winter