Among the imposing jumps of the Iguazu Falls there is a perlite: the beach Isla San Martín. A movie ride! 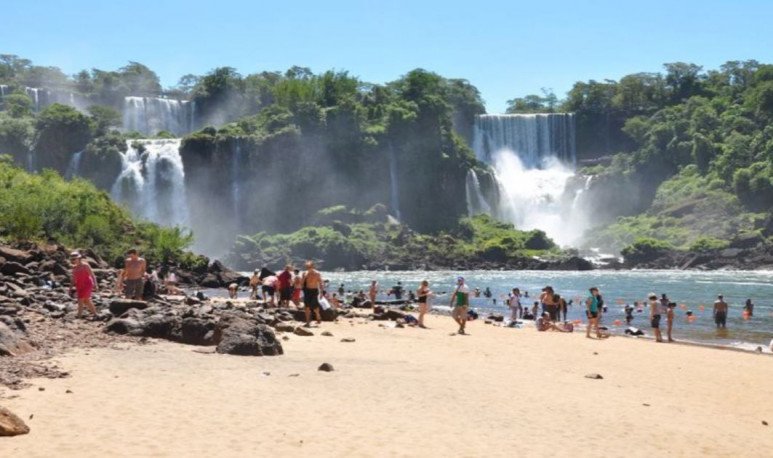 Iguazu National Park  is a natural paradise that contains many pearls inside. Isla San Martín beach is one of them.  Located on the only island of the Lower Iguazu River, it has a rare beauty . If you like waterfalls and the beach, this is the place to enjoy both things at the same time.

As taken out of a landscape of Jules Verne, this large island lies in the middle of the imposing waterfalls. Isla San Martín Beach is located on the Iguazú river on the Argentinian side, within the National Park and at the foot of the  Falls . It has a unique facade that distinguishes it from other beaches.  Coasts of sand, black stones, red wall high up to the sky and a bushy jungle wrapped in waterfalls . Along with Garganta del Diablo, Isla San Martín beach is one of the largest visited places in Misiones.

Everything on the beach Isla San Martín reminds us of a film landscape with an air of adventure. It is that this island has a rich history within the scope of the Iguazu Falls. Countless documentaries and films were filmed there.

To get to the beach you can only do it on board . The tour, as it can not be otherwise, begins with a landing. Next comes a steep staircase with over 170 stone steps leading to the nature trail. The 650 m of route is as intense as it is rewarding. The tour takes place on open nature trails in the  jungle , interrupted by small  jumps  of water. Impossible to have more contact with nature!

Inside the island is the viewpoint La Ventana. From it you can see in the distance the spectacular Garganta del Diablo and the jumps on the Brazilian side. It is also possible to access a balcony overlooking the San Martín Falls, the second most important of the Falls.  From there you get the best photos of Iguazú National Park and enjoy the Falls from the inside .

The walk along the beach Isla San Martín takes around 2 hours and is of great physical demand. On the other hand, the speedboat is enabled only when the river flow allows it. However, in the end everything is worth it, the reward is at hand. After a movie walk, the warm water of the beach awaits us to dive into it.

2 places to do rafting in Patagonia