Do you like to visit places that radiate culture? In this note we make a tour of the Jesuit mission of San Ignacio Miní. 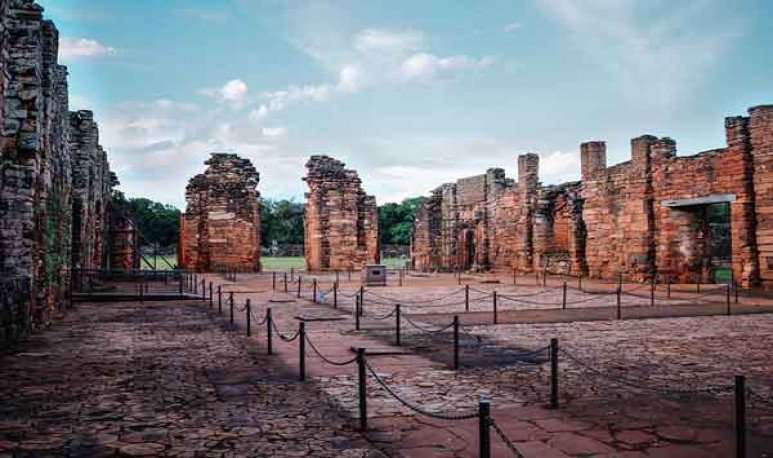 Because of their testimonial importance, they were declared  World Heritage Site  by Unesco in 1984. Currently,  San Ignacio Miní  is the best preserved of the  Jesuit missions  of the sixteenth and seventeenth centuries in the Argentine territory. Located in the northwest of the province of  Misiones , we can access the town of San Ignacio by RN 12. Whoever arrives there can enjoy the vivid landscapes, such as the Peñón del Teyú Cuaré or the Yabebirí River. To get there, we just need to travel 57 kilometres from Posadas or 240 kilometres from Puerto Iguazú.

Its building distribution revolves around a  central square . Around it were integrated the council and the main temple. One of his alters were located the parents' house, the school, the refectory, the courtyard of the workshops and warehouses. On the other side the cemetery, the vegetable garden and the coty-guazú (the house of widows). The homes of the natural, with their double galleries, completed the boundaries of the square. For the construction of the main temple, red sprinkling stones were used, in large pieces, without mortar, seated with perfect fit.

Attention is drawn to the designs carved in stone, where the entrance portal and the sacristy stand out. Figures of angels, pigeons and local flora motifs are observed with a clear Guarani imprint.

It is currently kept in a very good state of conservation thanks to important restoration works that were carried out over ten years in the middle of the last century. In 2004, with the support of the World Monuments Fund, valuing work was redone to leave it as we see it today.

In its time of greatest splendor, this reduction came to more than 4500 Guaraní. Likewise, its close relationship with the  Paraná River  allowed it to be in constant exchange with the other Reductions.

Near San Ignacio Mini is the village  mbocayaty , where the native  mbya community lives in the day. They market handicrafts. The place also allows you to explore a yerbaterero establishment and other crops, such as Stevia.

On site, in addition to the authorized guas there is an interpretation center to obtain all the necessary information.

The original mission was founded by the priests José Cataldino and Simon Maceta. It occurred around 1610, in the region that the natives called Guayrá (currently Paraná in Brazil). In 1631, most of the reductions were destroyed by Portuguese slave traders. The only survivors of these attacks were that of St. Ignatius and Our Lady of Loreto. However, in 1632 it was decided that they would be moved south-east. It should be noted that  the film Roland Joffé's Mission  and starring Robert De Niro, was partly filmed there.

After a long period, St. Ignatius was definitively established in 1696 in the place where it stands today.   Later, with the expulsion of the Jesuits from America in 1767, the place began to deteriorate rapidly. In turn, the town was destroyed by Paraguayan troops in 1817. Finally, in the 1940s the protection and restoration of the building began.

This architectural delicacy remained hidden for almost two centuries in the thicket of the  jungle . But luckily, today it represents one of the places to visit in Misiones. Its building bases not only represent an impact on the eye, but also speak to us. Gustavo Cerati sang that  “getting beauty out of this chaos is virtue”  and it is not an inopportune phrase if we refer to it. A site created by man and besieged by him too. However, he was able to transcend in space and time to tell us stories of struggles and recovery.