Salto Encantado Provincial Park is located in Misiones and has a waterfall surrounded by mysticism and rituals. 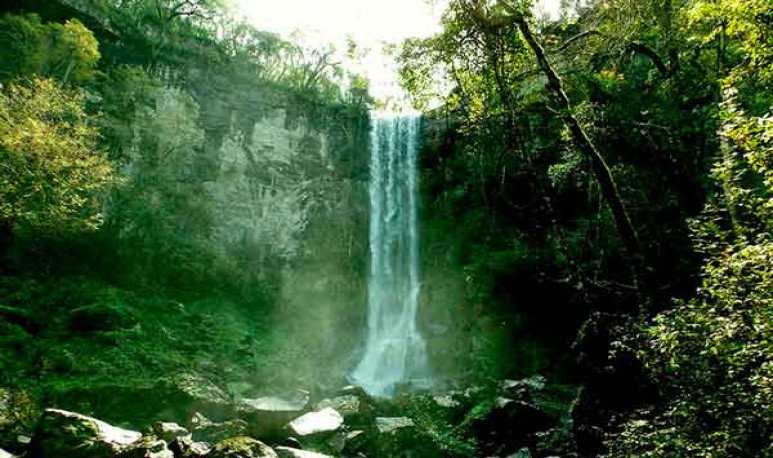 140 kilometers from Posadas , we find this  reserve  next to the town of Aristóbulo del Valle . It is a space that has  13,227 hectares  and offers direct contact with our nature. It houses various species of trees and a varied fauna, notable for the birds that inhabit it. It is one of the best kept jewels in the  missionary land . On a rocky wall, we can observe the  magical waterfall  that gives it its name. It has a waterfall of 64 meters high and is detached from the  Cuñá Pirú stream. If we want to access it, we just have to walk through a 375 steps staircase that gives us closeness and auditory richness.

The place is part of the  Important Areas for Bird Conservation  (AICAS) in the province. Its vegetation is home to 214 species, such as the yacutinga and the widow eagle. It also has records of 36 species of mammals, including the yaguareté. The park is monitored and controlled permanently by park rangers from the Ministry of Ecology.

Between the corners of its  jungle , you can see communities of white guatambú, cedar, lapacho and cane fistola. At the same time, the presence of lizards, squirrels and butterflies are part of the permanent landscape. Through some short and other long trails, it is possible to complete the route that leads to  four  jumps   in addition to the enchanted one.

For our convenience, the reservation offers extensive services. In this regard, we will have at our fingertips a maxi kiosk where you can recharge water, first aid items and gleaming sanitary ware. Also, it has installed a sales post of local handicrafts and a restaurant which typical dishes and an enviable view. And if any doubt arises, the tourist information service is constantly available and its staff work with great dedication.

It's said out there

El  Salto Encantado  was first discovered following an exploratory journey in 1936. Prior to that moment his existence was quite a mystery. While rumors and comments were circulating about their magical and religious properties, no one could find his whereabouts. However, the day came when it was allowed to explore and its location was revealed so that the rest of the world could appreciate it.

Since ancient times, a  legend  talked about him and his origin. It was orality and believers who guided their quest. The story told a  tragedy of love  inspired by the  Guaraní Aboriginal  settlement that populated the Cuñá Pirú Valley. There, there were  two tribes  who were  enemies  . Aguará, the chieftain of one, had a beautiful daughter named Yate-i. At the other end, there was Yurumi, whose son named Cabure-i, was an excellent hunter and warrior.

Young people met during a hunt and  romance  was born among them. His parents didn't accept him and hatred unleashed a huge battle. During the fight, Aguará died and the girl began to cry, forming with her tears little threads of water. His beloved, watching her, left his weapons and ran to comfort her. At that moment, hundreds of arrows from both sides  shot the couple down.

Tupa, the god of nature, caused Yate-i's tears to create a stream and the earth open, shelter them. In that place, the fluent fell giving life to the mystical waterfall that today is hiding in the middle of the jungle. Currently, Salto Encantado captures the attention of thousands of tourists who come to know its history and to corroborate in person its  beauty .