The Aconcagua Provincial Park is shining with secrets that are worth knowing. We visited some and tell you about them. 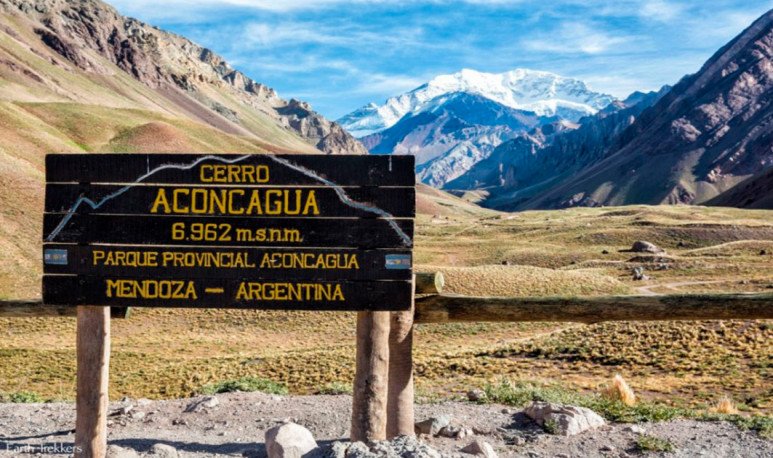 It is one of the largest provincial parks in our country,  Aconcagua Provincial Park  is located northwest of Mendoza province and has an area of 65 thousand hectares. It is 165 kilometers from the city of Mendoza and it is possible to reach via the RN 7.

Here is the  largest summit  of the American continent, Cerro Aconcagua, which, with its dazzling beauty, shines with its eternal snows  on top . While this mountain is the star of the place, it is also important to highlight the importance of its archaeological remains. In 1985, a group of Mendoza walkers exploring the southern wall found remains of an 8-year-old Inca boy, slaughtered and deposited there more than 500 years ago. This finding is known as  “the mummy of the Aconcagua ”.

What does “Aconcagua” mean?

The word “Aconcagua”, like most indigenous toponymy, has generated controversies as to its meaning in Spanish. The most recognized conception comes from the  Quechua language  (Akon — Kahuak) which means “Stone Sentinel”, however, in the Aymara language the words (Kon — Kawa) can be found in the Aymara language.iacute; to be translated as “Monte Nevado”.

Another attraction within the Aconcagua Provincial Park is the  Horcones Valley . There is a self-guided interpretation trail around the lagoon (of the same name), which fascinates visitors with its colour, where it is possible to appreciate a landscape that seduces by its majesty, where nature manifests itself in all its splendor. The history of this place is interesting as well, as this whole valley was covered during successive periods by large  glaciers  . The glacial lagoon of Horcones, at 2950 meters above sea level, feeds on the melting waters of Cerro Tolosa. It is a journey of almost two kilometers that can be traveled quietly in an hour, without a doubt it is a circuit that captivates visitors by its landscape beauty.

Visiting the  Aconcagua Provincial Park  is a very rewarding experience for travelers, since it is not only beautiful natural landscapes and the largest summit in America, but we can also witness first person a place with a lot of history in our country.

From the  city of Mendoza  you can access via the RN 7. From the provincial capital there are daily excursions to Aconcagua Provincial Park. Also for those who practice mountaineering there are various tours known as “High Mountain Excursion”.