They say that there once existed a tree where San Martín rested one night after liberating Chile and Peru. The legend of the Apple Tree. 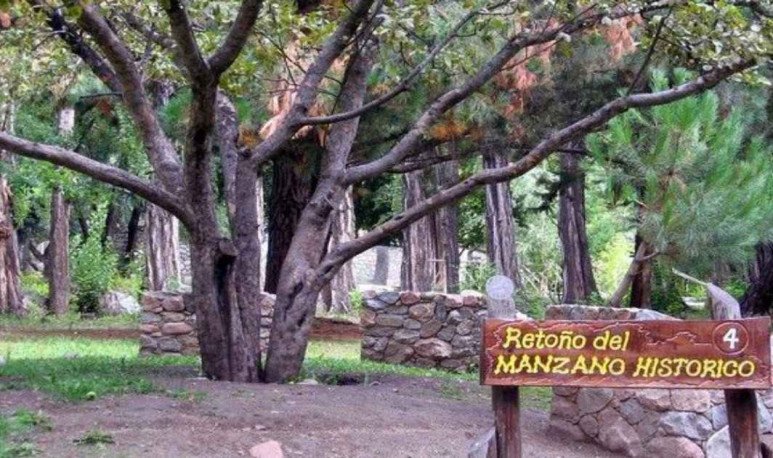 The town of Manzano Histórico is located in the Department of Tunuyán, at an altitude of 1200 meters above sea level, 120 kilometers from the city of Mendoza and 40 kilometers from the city of  Tunuyan . There is a  campsite in the area, suppliers, restaurants, regional food stalls and multiple options for adventure sports. However, what stands out, and gives the name to the place is the monument to General San Martín, and the sprout of an apple tree with a particular history.

It is named  “Return to the Fatherland ”. The monument “Return to the Fatherland”, the work of the Argentine sculptor Luis Perlotti, was made to commemorate the 100th anniversary of the birth of the procer. It recalls the historic moment when in 1823 San Martín, at the foot of Paso del Portillo (now Manzano Histórico — then Cajón del Manzano) meets his friend, Colonel Manuel Olazábal. The Liberator returned from Peru, after his historic resignation. Olazábal, who had been a cadet of the Horse Grenadiers Regiment, was going to receive the  Liberator  of America. They flank the figures, the reliefs with the entourage that accompanied him. Two others on reliefs, located on the sides, reproduce the rest of San Martín at the foot of the apple tree and the farewell hug, respectively. After that, the General  stopped to rest after  crossing the Cordillera de Los Andes through the El Portillo pass .

In a testimony given daily Los Andes, Perlotti, of whom there are Sanmartinian sculptures in other parts of the country, acknowledged having been inspired by the painting of Fidel Roig Mattons, which bears the name Return to the Fatherland. “ The figure of Saint Martin on his mule is shocking, not only because of its size, but also because of the quality of the design,”  wrote the historian Alberto Piatelli.

Next to a few meters from the monument, there is a sprout, which would be the third or fourth generation, of the tree under whose shadow Saint Martin was   .The truth is that this Historic Manzano gives its name to the area and prides all Tunuyanins .

Learn about the legacy of the Apostles in Missions

Laguna Azul: the base for water sports

10 activities to do in Sarmiento Park

Drive-in, an old habit that endures