Home Travel Mendoza The fountain of wine in San Rafael

Bodega Labiano has been established as a reference in wine production and wine tourism. The source of wine is its main attraction. 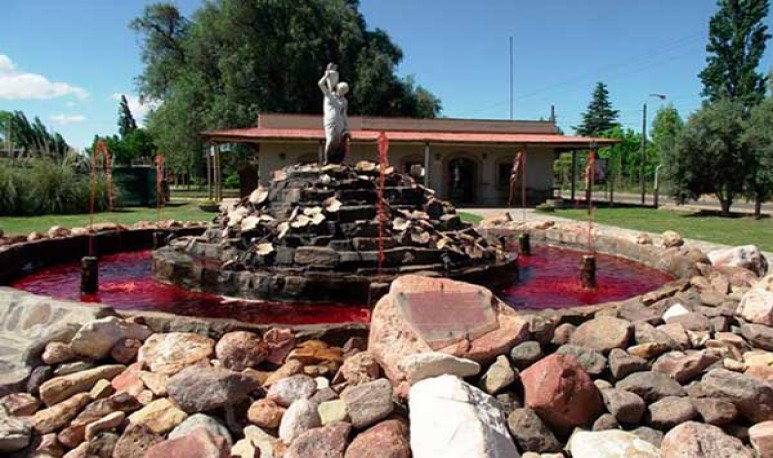 The department of  San Rafael, 250 kilometers south of the City of Mendoza,  offers a large number of wineries with top level wines. However, because it is a purely tourist place, these wineries have also managed to exploit that part, thus framed in what is known as  wine tourism  or oenological tourism.  This way of making contact with tourists and potential customers is what has boosted Bodega Labiano for some years . But, as the main tool, they designed and built the “Fountain of Wine” in their premises.

To learn more about this winery and its ideas about winemaking and wine tourism, we talked to  Oscar Labiano . He told us that, like the vast majority of Mendoza wineries, Bodega Labiano finds its beginnings in European immigrants. “ It was founded in 1925 by Spanish immigrants. Hipólito Labiano came from Navarra, and together with his children they created Bodega Labiano . Later, Francisco Labiano, who was the eldest son and who is my grandfather, is in charge. This is how history begins with a company called Francisco Labiano S.A., created in 1972.”

Some wineries in Mendoza buy grapes from different producers, others, on the other hand, have their own vineyards. “ The winery currently has 30 hectares of vineyards,  all in the area of Rama Caída. Although in the past it had many more,  we got to have 200 hectares.  Along the way there was a crisis and wine conversion, which greatly shortened the company's vineyard ownership,” says Oscar about the origin of its raw material.

Until 2005, the company, in addition to wines, was also engaged in stuffed fruit. It was in those same years that the wines of  Bodega Labiano  began to be sold all over the world. “At the time we export wines to several countries such as Russia, the United States, Panama or China.”

The concept of wine tourism has gained a lot of strength in the last 20 years. People visit wine areas to settle in the wineries to taste and buy wines, but in some cases, they can also eat and even stay overnight. “ In 2008 we started wine tourism, with a lot of force. It started gradually, but today we receive 150,000 people per year,  thus being one of the most touristic wineries in the country,” says, proud, Oscar. And it's not for less.

There is a special appeal at Bodega Labiano. One that captures the flashes and the eyes of visitors, is the Fountain of Wine.  “ The wine fountain was created about 10 or 12 years ago.”  However, to the disillusionment of the one who likes to steep his elbow, “ what he throws is not wine , but water with dye. It could not be wine with the operating characteristics that the source has because the wine would be completely oxygenated, transforming into vinegar soon.” And, on the preference that tourists show to the source, he adds: “It is very visited by all the people who come to the cellar.  It's the nerve point from where visitors begin. It's the number one attraction.”

And in Bodega Labiano they have been able to exploit the interest that arouses the source in customers. “We have the brand 'La fuente del wine' in a line of wines. And now we're inaugurating a wine chain with that name too.”

Finally, as for its construction, Oscar recalls: “The fountain was designed by a local artist named  Daniela Merenda . It has iron leaves and is made in  porphyry in the area of San Rafael, de los Goldfinks. It is a beautiful, purple stone that is present here in the hills of Sanrafaelinos.”