Just like Madison's, but no famous actors or love stories. The bridges of Cacheuta are a tourist attraction that you cannot miss. 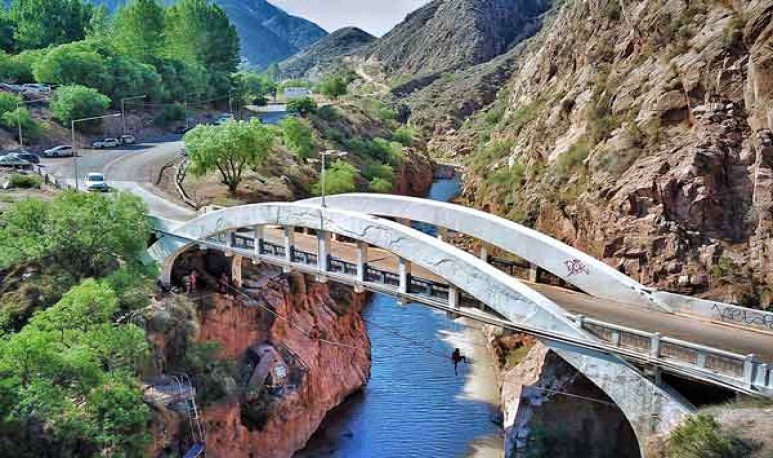 Built in different times and for different purposes.  The bridges of Cacheuta cross   the river of the same name, allowing, today, the passage of tourists and some local residents  . But yesterday, they allowed the passage of the Trasandino train, as part of the route linking the city of Mendoza with Uspallata.

Among the various heritage sites of the town of Cacheuta stand out  the two bridges linking the Lujanino sector with the Lasherino sector of the district, a situation that is generally unknown. In the area, there is a long and, it seems, eternal history between the two departments.  Because of the whim of the riverbed and our hydrographic maps, nobody has ever been clear  how far the territory of Las Heras reaches  and where the territory of Luján de Whose.

However, both  bridges of Cacheuta were declared cultural heritage of Mendoza in 2002 , through a decree highlighting the historical, constructive and environmental value of the viaducts.  Located at kilometer 42 of the RP 82, they were installed several decades apart.The railway bridge, built in brick, was part of the Trasandino circuit and was launched in 1891 , when the first section linking Mendoza with Uspallata was inaugurated .  Meanwhile, the suspension bridge, was built in  1952  by the Provincial Directorate of Road Traffic.

Smaller than it looks

A sketch published in the book “Water, housing and health”, a report that reflected the works of the five-year plans of the Peronist government in Mendoza, shows in the middle of the twentieth century a panoramic view, perhaps a little oversized for what was later built. The perspective that also included in the background the bridge with brick archery, stands out for the magnificence of the one that was about to be inaugurated. The author of the view is unknown, but we found that  its expressiveness is closely linked to that of other similar bridges that were being made in other parts of the country,  including the suspension bridge that crosses the Quequén Grande River in Necochea. While the latter, today called Hipólito Irigoyen bridge, was inaugurated in 1928 and had a development of 270 meters, with a central light of 150 meters,  the Cacheuta bridge had smaller dimensions.

Approximately  140 meters long , it connects both sides of the river, connecting the oldest sector of the village and the railway station, with the neighborhood that was built for the workers of the Luz y Fuerza company.  It has a group of houses built of stone and a school that no longer works as such . It is named after Victoria Aguirre Anchorena, in honor of the person who donated part of the money for the realization of National School No. 54, denomination it initially had. She was a pioneer of thermal tourism and wanted to contribute to the education of local children.

In Huarpe or Quechua language, the meaning of Cacheuta is “valley or place where people gather” (Ca: other; che: people or person and ata, ota, uta, “valley or meeting place”).

Undoubtedly, the bridges of Cacheuta contributed to the connection of the population that lived there, and currently to tourists visiting this area of Mendoza,  one of the most attractive landscapes. For this reason, the bridge made by the engineers of Trasandino, who designed this engineering work in the way of the Roman aqueducts and the suspension bridge with concrete surges, are emblems that identify all Mendoza.

Things to know about Intiyaco