A town nestled in the mountains with a huge variety of attractions related to popular culture, history and tourism. 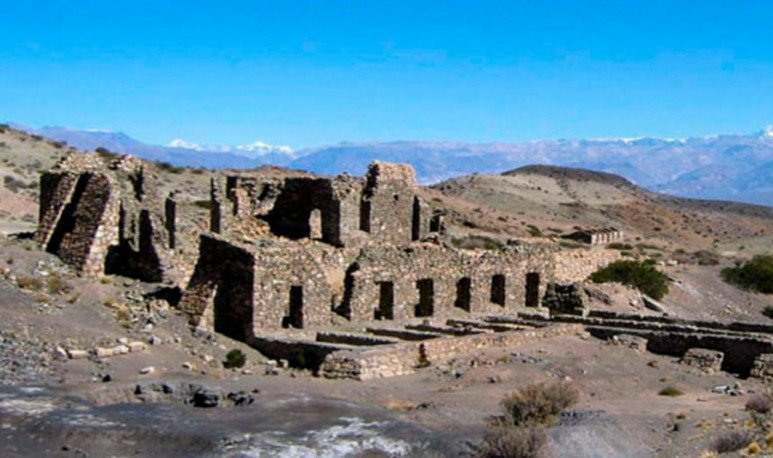 The town of Paramillos is located 83 kilometers northwest of the city of Mendoza, in the middle of the precordillera. It is located in the department of  Las Heras   and is one of the most visited tourist and cultural destinations, next to Villavicencio and Uspallata.  In Paramillos, religion, history and tourism coexist in one place.

This destination is accessed by the  well-known  RN  52 . A beautiful dirt road, with curves and memorable landscapes, leads us to the cross, where a real and varied route begins.

The ruins of the mines

The ruins of the  ancient lead, silver and zinc mines  in Paramillos, Uspallata materialize a unique historical industrial heritage.  These mines are considered the first mining exploitation in the  Argentine Republic  . The name comes from a diminutive Spanish paramo or desolate place.

From the beginning of the 17th century and until the middle of  the 18th century, the  Jesuits  faced their first systematic mining exploitation.  In the middle of 1750, more than  4500  natives worked there, resulting in an intensive exploitation phase, which lasted  about 30 years . The complex stands out a building,  inside which there is a large well, approximately 90 meters deep , called pique “Governor”, which was built approximately in 1888. From this, the mineral was extracted, which was transported to the concentration plant located a few meters away, in which the grinding and separation was made by decantation. The abandoned ruins are regularly visited by tourists and interested in the mining past of the province of  Mendoza .

The famous scientist,   Charles Darwin , undertook in the early 19th century a series of trips at the HMS Beagle . When the ship arrived ashore, it would go down and investigate the area.

After several stopovers,  in March 1835, the HMS Beagle landed in the port of Valparaiso. Immediately, Darwin crossed the  Andes Mountains  , making a geological description. He studied the profile of the Sierra de Uspallata and, with its sharp observation power, described a sedimentary sequence, with more than 52 petrified trunks.

He detailed them thoroughly, as did the surrounding sediments, characterized by their high volcanic content. As was its character,  he tried to interpret the processes that would have caused this geological scenario, and concluded that the trees had been buried as a result of phenomena that occurred on the Atlantic coast during the Tertiary period.

From this important contribution to humanity, a  monument to Darwin  has been built on site, turning this area into a center of attraction of  religion, history and tourism .

The passage of the army of the Andes

This region crossed one of the columns of the Army of Los Andes, when the liberating epic of the south of the continent began.  In 1817, that column, which was one of the chief of the  Army of General San Martín  , was under the command of General Juan Gregorio de Las Heras, who went to Chile on the road to Uspallata.

In the ruins of the mines of Paramillos,  near the old pens, a metal crucifix, multiple plastic flowers and offerings, remember the place where, according to tradition, was killed by the police Juan Francisco Cubillos , popularly known as the  Gaucho  Cubillos. The site is an oratory of the promisants who, from all over the country, demand the mediation of help from the “popular saint”, perpetuating his myth. He died at the age of 27, in a confusing episode. According to one version, he was shot and stabbed, while he slept on a  ranch . According to another, he was killed in a pulperia, where he offered brave resistance to his captors. After his death, the miners did not allow the cops to take Cubillos's body, and watched him in a remarkable demonstration of popular affection and fervor.

For all the  above attractions , Paramillos becomes an ideal destination for a day of sightseeing in Mendoza. But not only for leisure, because, given what we have just told, Paramillos is definitely a center for learning  popular culture, history and tourism.

Let's take a walk around the mountain