It is a natural rock formation 60 meters high. Seen from afar, the Castles of Pincheira look like a real medieval structure. 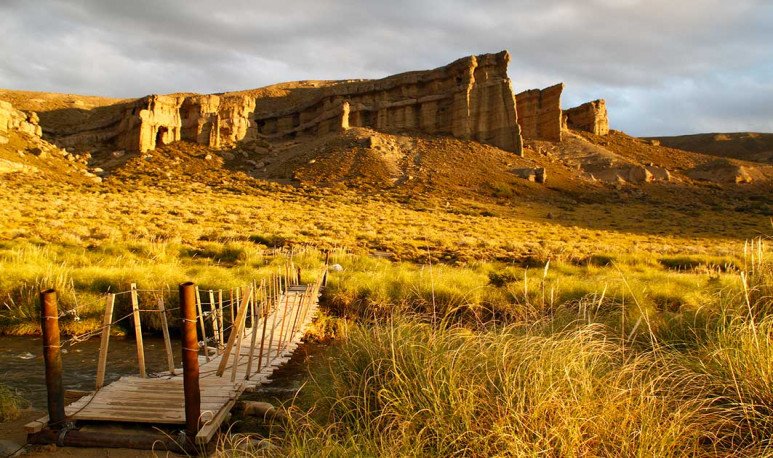 It is another of the natural tourist attractions that the department of Malargüe has to offer us.  A cluster of giant rocks are erected on the mountain to, imagination by, give way to imposing towers, worthy of a medieval castle.  The Castles of Pincheira are one of those places that have a lot to offer but are not very visited by tourists. Here, we will try to convince you that, when you come to Mendoza, do not forget to attend this unique experience.

27 kilometers south west  of the City of  Malargüe  are the Castles of Pincheira. They are accessed on the south  by the RN 40, taking a detour towards the Andes Mountain Range.  This is a gravel road worth going. Like every road of this type of surfaces, it forces you to travel it slow, so as not to miss any of the beautiful landscape that surrounds us. Its condition is optimal and can be completed in any type of vehicle.

When you arrive at the place, the area gets a little wetter.  Green trees and natural grass peeks over the banks of the Malargüe River.  There is a campsite that offers basic services for a comfortable stay. From there you can see the immensity of the Castles of Pincheira.

The least that human beings could do, in response to this wonder that nature has given us, was to declare this area as a Protected Natural  Area .  Thus, there are a number of rules and prohibitions that govern the place and aim to ensure its natural state, with the least possible human intervention.

One option is to stay on the campsite and simply contemplate them, kill them in the middle. Another is to walk to the place, crossing the river by a pedestrian bridge and reach the natural monuments. Once there,  it is possible to ascend and “get into” the castle . From there it is viable to get a privileged view of the campsite, the river and the whole area.

The legend behind the name

Legend has it that, at the beginning of the 19th century, the  Pincheira brothers lived in the Malargüe area. They formed a band of bandits who, contrary to the independence ideas of the moment, were in charge of confronting the patriots, at the behest of the orders of the realists. The most daring historians in the area say that the Pincheira were in charge of stealing and looting small shops.  But they were only doing it to give it to the poor. The truth is that, when these people were sought by the independentists, they hid in the rock formations that we know today as the Castles of Pincheira.

More than one place barerero recommends not to inhabit the place at night, as we could hear, or even see, the Pincheira brothers hiding from their pursuers. Although, obviously, this theory does not have too much sustenance.

The Castles of Pincheira seem to emerge between the mountains, but  they are actually sediments of volcanic eruptions, as are the melting cones between them and the Malargüe River. The sandstone that makes up this sedimentary set is easily worn by the action of water and wind, which generates the shapes that allow you to play with imagination.  The large thermal amplitude of the area, both daily and seasonal (snowfall and zonda wind at two thousand meters high) keeps its colors vivid and solidifies those forms that became a tourist attraction.