A colorful, wide and picturesque street. La Alameda is another option in the many walks of the City of Mendoza. 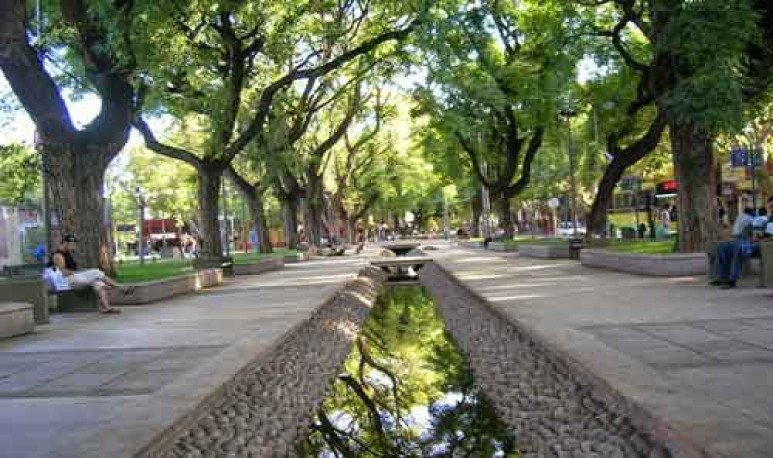 The City of Mendoza offers many streets with wide sidewalks, bars, cafes and trees that transform into perfect walks for locals and tourists. We have talked about  Aristides Villanueva  as the perfect example for this. And, continuing with that case, we could say that Alameda is the Aristides, but a little more popular.

The Alameda is the very street  San Martín but that, from its intersection with Corrientes Street to the north, offers Paseo Alameda, moving this term towards the street in general. A kind of wide pedestrian boulevard separates San Martín street in the middle.  Leaving on the west side the traffic of vehicles and one of the sidewalks, with shops and products and services. On the other side there are bars, cafes and restaurants.

The origin of the Alameda

Perhaps because of the sculpture of General San Martín sitting on one of the benchos of the pedestrian promenade, the origin of this sector is associated with the  Liberator. He, when he was mayor of Cuyo, decided to prolong the walk by fostering him with poplars brought from Europe.

At the beginning of the nineteenth century, the Alameda did not exist as such, but the irrigation channel known as Tajamar, in whose environment was the hamlet of the founding city. There were ranches, crops and pulperías, where cockfighting and square races were held.  In 1808 the Cabildo de Mendoza arranged for the creation of a public walk. It was then a two-block long extension with double row of poplars on the banks. It was in 1814 when San Martín, being mayor of Cuyo, expanded and beautified the promenade.

In 1861 the earthquake that totally destroyed Mendoza also left La Alameda as a ruined neighborhood, full of debris and empty of meaning.  The New City, with its five large squares and wide streets, was located to the southwest. It was only between 1884 and 1887 that this neighborhood was rebuilt as a residential imprint.

Throughout the twentieth century, Paseo de la Alameda received three transformation projects. The first in  1912, when it was given architectural form “to the French”, with platforms,  balustrades, staircases and central stonemasons with palm trees. The second was projected in between 1930 and 1940, expressing new landscape criteria for public spaces . The third,  in 1978, followed formal trends in vogue then and distorted the traditional linearity of the ride,  which was why it was highly criticized. At the end of  the last century the capital city began a new intervention, culminated in 2003 , aimed at recovering the neighborhood of La Alameda in an integral way. Materials were used in the area, and thus the walk regained its classic image, to which the flower kiosks that put a beautiful note of color to the area were definitely incorporated.

In recent times, they have also opened bars and restaurants, many themed in nature, where the pleasures of gastronomy with music and singing are combined,  coffee with poetry, good drink with plastic in charming art galleries . Its owners say they have committed to the recreation of local culture, taking care and promoting the roots of Mendoza's identity.

The Municipality of the  City of Mendoza has also  joined this commitment, emphasizing the old constructions surrounding the promenade, placing gigantographies with paintings by prestigious local virtuosos and promoting artistic activities and cultural activities throughout the year. These attract audiences of all ages, both Mendoza and tourists.