The Aeroclub offers an unforgettable experience, board your aircraft and enjoy a unique moment flying around Mendoza. 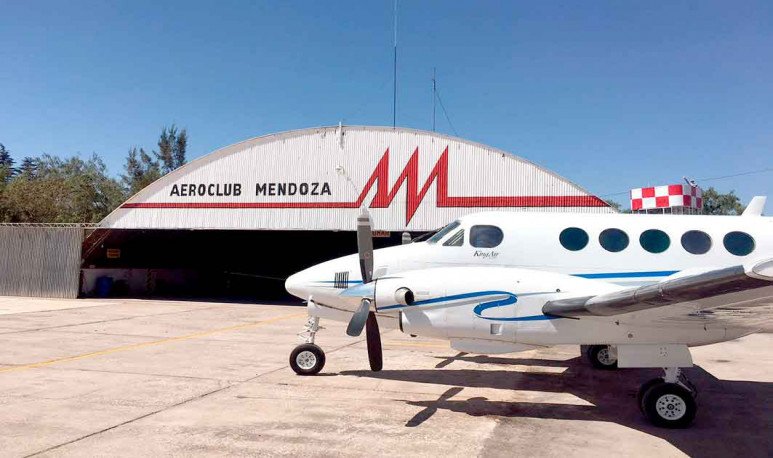 Touring Mendoza walking through the streets of the City is a highly recommended activity. Taking the  metroroad  or public transport, and getting to know the outskirts of urban areas, is also a popular attraction.  Riding your bike paths is really tempting.  Riding by car or motorbike through its favourite landscapes becomes a real pleasure. While,  navigating a boat or motor ship through one of its dikes such as El Carrizal or Potrerillos dam is an opportunity not to be missed.  However, there is another possibility to get to know our province. One through which we can have a panoramic view of the City, the surrounding mountains and its surroundings. Flying through Mendoza we can keep memories of those we lay hands on when we remember our travels.

The  Aeroclub Mendoza ,  located on the Pan American Route in La Puntilla, Luján de Cuyo, is the right place for those wishing to see Mendoza from the sky.  From the heights you can see the crops that surround the hulls of the wineries, the land that gives rise to the colorful Uco Valley, where protected areas, rivers and streams, vegetation and mountain landscape, show the oasis created by Mendoza.

Each aircraft can carry  3 passengers per tour .  And the departures have a duration of 30 minutes or one hour depending on the route you choose . The first covers the  wineries and vineyards area of Luján de Cuyo  and the longest encompasses  Valle de Las Carreras and the Upper Area of the Uco Valley, completing a spectacular flying tour around Mendoza  .

The Aeroclub Mendoza also has a Flight School, in which  it is taught to fly the aircraft to those who are over 17 years old and have full secondary.  The Aeroclub de La Puntilla school offers courses with a  minimum duration of six months and a maximum of two years, with the recommendation to carry out four hours of flight per month.  In addition, further training courses are provided throughout the year, such as navigation area, airfields and safety, among others. When the student obtains their  Private Pilot  license, they must continue to fly, to accumulate hours and continue to render higher ratings, such as instrument flight, commercial pilot, instructor or prime commercial pilot.

The Aeroclub acts as ground support for the operation of State ships such as police helicopters,  Army and Air Force . In turn, it provides  aeronautical fuel service, hangaraje and platform. It has hangars for 18 aircraft and its aircraft include single-engine, two-seater, triseater and quadrizas.  All are enabled for instruction with current airworthiness equipment and regulatory insurance.

It was  officially founded on August 2, 1915 . In 1908, a group of navigators from the sky, including brothers Jorge and Eduardo Newbery, managed to create the Argentine Aeroclub, which was the seed of civil and military aviation. During 1911, some men with aeronautical concerns gave rise to the origins of this institution. In 1912,  the Italian, based in Mendoza, Mario Casale, became the first pilot to fly on Mendoza soil,  rising from a corridor located on the side of the current lake located in General San Martín Park. In 1914, when the Cerro de la Gloria monument was inaugurated, Casale and Teodoro Fels flew over it, surprising those attending the event. In  1922, he obtained a new legal personality agreed by government decree which is the one it currently retains.