With the idea of keeping the writer alive among its corridors, the Los Alamos estate was built the Labyrinth of Borges. 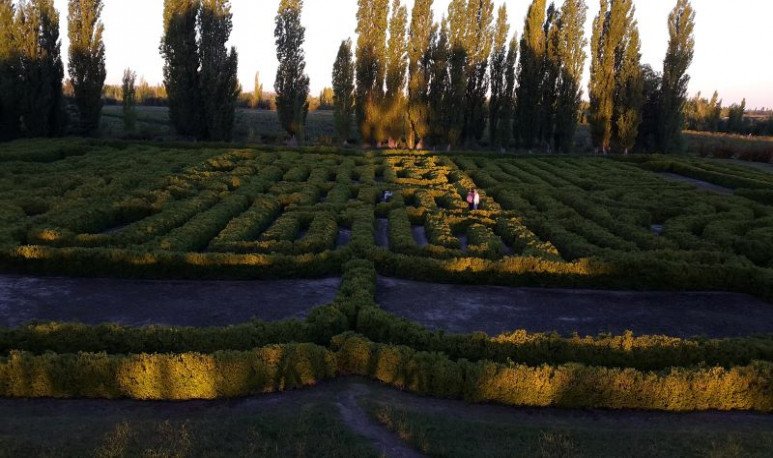 The  Los Alamos farm is a huge portion of land, of several hectares, which is located about 40 minutes from the city of   San Rafael . Already it is a quiet, relaxing and touristic place. The green of its vegetation, large grass spaces, some creek that adorns the scene and native animals create a special environment. But it became more touristic since the Labyrinth of Borges was built.

The idea was born

A letter, a desire from Borges and the willingness to realize it. The planets lined up for the Argentine writer to be remembered as he intended.  “ Borges said in Rome, in 1984, that he did not want to be remembered with metals or bronze, but with something alive,” recalls Nacho Aldao, nephew of Susana Bombal, who was a close friend of the poet, and owner of the Los Alamos estate.   “ From there came the idea of remembering it with something that lived. Because he was a poet, so how do you put a poet in marble, iron or into a still, cold structure? Actually, it is a monument and we face it as such, to make it a self-sustaining attraction. The premise was that it was enjoyed by  people , because making a monument that is not visited by people, is like making a square and not letting children in,” said Aldao, who today administer the place.

Nacho also remembered, with laughter and emotion, the time his brother answered the phone of the house on that same farm.  It was Borges himself, already sentenced to death, who called to say goodbye to his friend. It's just that, really, the writer is breathed on the spot.   This labyrinth “is a monument for Jorge Luis Borges. It is a product of three generations, along with the maze designer who came up with it. Borges came here, to the Los Alamos estate, on vacation.  The first time he came was when the   National University of Cuyo   gave him the first honorary degree he received. Then he came to San Rafael, being a very friend of Susana Bombal. She owned the estate, and both shared a quality: a great handling of English . They were great with English literature. What brought them together was the love of that literature, and Susana, in addition to being a writer, was an excellent translator. He did it from Spanish to English, as from English to Spanish. He did it with authors such as Borges himself, Gabriela Mistral, among others.”

The labyrinth is usually one of the recurring themes in the Borgean work. That is why it was decided to build one in his honor. However,  the idea is not precisely that the visitor gets lost in it. But what you're looking for is that you soak up your work. It is that, seen from above (something that can be done thanks to the tower that has been built on one side), it can be noted that the columns of shrubs that make up the walls of the labyrinth are strategically located. They form a huge word “BORGES”, but also adorn the scene a book, a cane and the infinite sign, among others. All elements and themes associated with Borges and his work.

Nacho Aldao said that, in times of pandemic, “we maintain all protocols, such as distancing, barbijo, permanent disinfection, alcohol gels, etc.” And, in addition, the place has other offers, such as gastronomic. In fact, it is highlighted throughout the apartment as one of the best places to eat. Tacos with  goat meat, meat empanadas a la maza and raw ham busquettes are some of the ingredients that make up the menu. It's definitely a must-see.

In and around San Rafael

Cuesta de Miranda: this is what you need to know

Wayra Caves: an experience for fearless

The inexhaustible supply of rosarine for childhood