Home Travel Mendoza An afternoon at the Rosedal

It is one of the most important and visited spaces of General San Martín Park. The Rosedal treasures anecdotes of the most diverse. 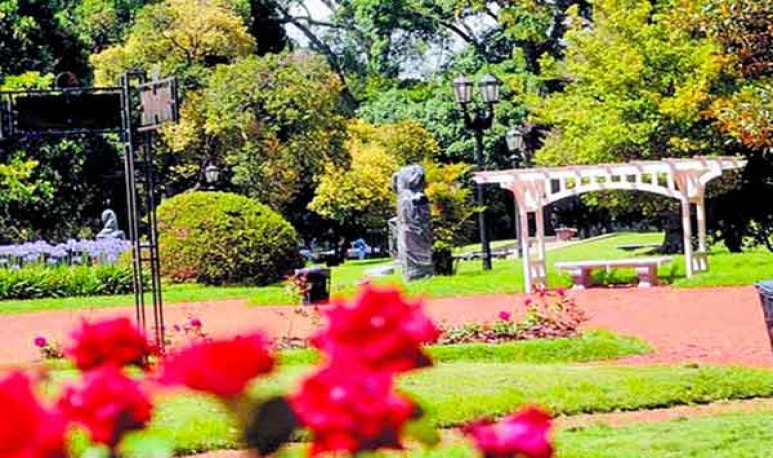 His name explains practically everything. A set of roses. Just like that. However, the context of this rose bush makes it a special one. It is located in the mythical  General San Martín Park  .  Its design and layout make this space a unique place to rest, to take a few mates, to exercise and, taboos outside, to spend a romantic moment.

The Rosedal is located on one side of the lake of the park. A picturesque path of brick dust paths crosses the green lawn that forms the basis of the most diverse rose bushes. All adorned by white and imposing pergolas. In addition, some palm trees contribute to the postcard being a typical image of General San Martín Park.  There are about 500 varieties of rose trees and pergolas that shape the Rosedal.On the other hand, there are 8 sculptures that color the place .

The works in the Rosedal

In 2017, as part of the  renovations  that the provincial government carried out throughout the Genera San Martín Park, the Rosedal took its part.  The work included the placement of 7000 m2 of floors in all the sidewalks and veredines surrounding the lake, the installation of 35 cast iron benches, 60 cement benches, 31 drinkers, 2 concrete ping pong tables and, using the same material, eight chess spaces were built with their respective seats.

In addition, the walk was intervened with new green sectors that include the planting of 5,000 new rose trees using the sprinkler irrigation system that was recovered within the new works.

A special feature of the work is the placement of  metal waste baskets that were made by the inmates of the Boulogne Sur Mer prison. In addition, the Rosedal was refurbished for the movement of people with reduced mobility, so 200 m2of ramps and special stairs were placed .

El Rosedal has served as the scene for the most diverse events. Sometimes  some university graduate is often seen suffering from the malicious festivities organized by his friends , with violet ink, egg, vinegar and the most disgusting elements. Also, in a more civilized plan, friends or families usually gather in this area, tablecloth in between, to have some mates and spend the evenings. Later in the evening,  many athletes choose this green space to do some training.And finally, the darkness that is sometimes generated between the rose bushes and palm trees is ideal to see some intertwined silhouettes, paying homage to country love .

Many years ago, quinceañeras and girlfriends chose the Rosedal to take photos for their events. Women dressed in white, alone, with friends and family posed next to a rose bush, sitting on the benches or leaning on the sculptures, giving the image glamour.