The luxury of a thermal spa and the simplicity of a Mennonite colony come together in Guatraché, a colourful Pampean village with a rich history. 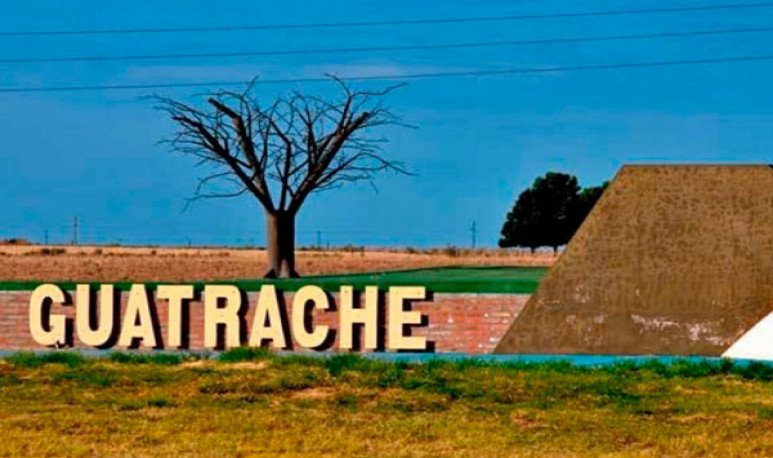 Just over 170 kilometers from  Santa Rosa  , the capital of  La Pampa , is Guatraché, whose origins date back to the  desert campaign , with the expulsion of the last original peoples around 1870.

At 12 kilometers from the urban ejido is Laguna Guatraché which, in addition to its important tourist value due to its thermal water with healing properties, has historical value because there is an indigenous cemetery and archaeological remains. In that area lived the pampa chieftain  Juan José Catriel .

While history indicates that three decades earlier it began to populate, the  official foundation was on April 19, 1908, when the Guatraché Land Company bought the territory from the Unzué family . The first settlers came from the hand of the railroad, who built the houses with a British aesthetic.

In 1910, the San Francisco Javier Church was inaugurated , which is part of the tourist circuit of the town. There, every 3 December the patron is celebrated with the celebration of Holy Mass and a caravan of cars that run through the streets of Guatraché in honor of San Francisco Xavier.

To date, the meaning of “Guatraché” remains a matter of discussion , since the indigenous dialect taken into account for translation depends, may become a different interpretation. There are those who translate “guatra” as “belly” and “che” as “people”, so one possibility is that it means “belly of people”, but historians also spread other versions.

Another interpretation equals “guatra” with “disease”, “guatra” as “outsider” and as “petiso”, So it is derived in translations such as “sick people”, “people forastera” or “people petisa”.

With a property of about 950 hectares, of which 50 are beach, the Laguna de Guatraché is an important tourist attraction of the city.  In 1991 it was declared a Protected Natural Area and is the headquarters of the Provincial Tourism Festival.

The lagoon has the permanent influx of Guatraché stream, which is also one of the few streams in the province of  La Pampa . It also has other attractions such as the “los cerros” sector, the island, archaeological sites and the hulls of old estancias.

On the other hand, the spa is centralized in two swimming pools — one of them covered in mind the winter season. Extraordinary properties of the complex are advised for patients with arthrosis, arthritis, low back pain and contractures. In addition, another attraction of the hot springs of Guatraché, is its characteristic mud, ideal for treating various skin conditions, but also used for aesthetic and beauty purposes.

Just 35 kilometers from Guatraché is also located the  Mennonite colony “Nueva Esperanza”, installed there in 1985  - becoming the first of its kind in our country- in a territory comprising about ten thousand hectares.

In addition to livestock development, they are engaged in the production of silos, furniture and dairy.

As if it were a time trip, in the colony they use no technology but to carry out their tasks. Women wear dresses and aprons, combed with braids, and men wear overalls. They were the ones who first learned Spanish for commercial purposes, since they communicate in German and Dutch dialects.

The colony can be visited every day except on Sundays, since that is when they go to mass. While it is recommended to visit with a guide, you can access there without your presence being necessary, although the warning is mostly because some of the members of the colony may be reluctant to tourists.

A unique museum in Buenos Aires

Four places you can't miss if you travel to Jujuy