Home Travel Jujuy When the devil is loose

Once a year, during the carnivals, Tilcara and the neighboring villages are filled with color, party and joy 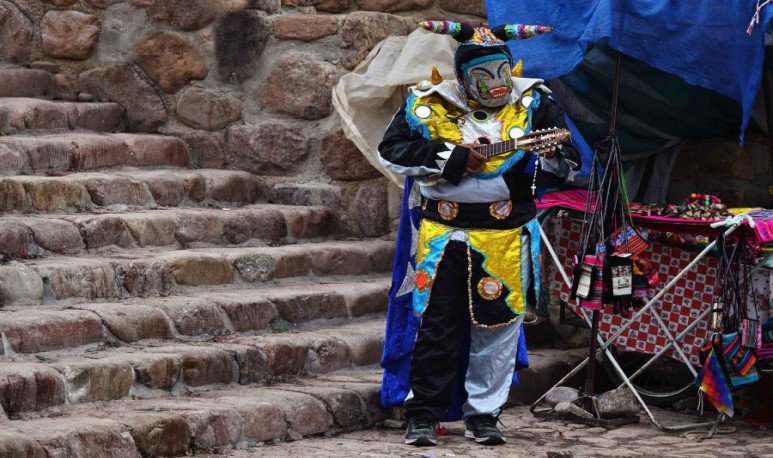 Most of the year,  Tilcara (Jujuy)  is a quiet village. Between its dusty streets and its constructions with the colors of the earth, calm and silence reign that feels as if time has stopped. But when the  devil  is loose, everything changes. When the   devil   is loose, everything is allowed.Once a year, during the  carnivals  ,  Tilcara  and the neighboring villages are filled with color, festive and joy. Religious and pagan beliefs are mixed and celebrated.

It all starts at a precise moment: with the  dig up of the devil , a small doll that symbolizes the sun which, for the locals, is in charge of fertilizing the Pachamama. It is said that the  devil  comes down from the hills and mimicizes himself with the villagers. That's why it's hard to recognize it, to know who is who, who carries it with him and who doesn't. Colorful costumes and masks help to confuse identities in a party where anonymity allows you to unleash the celebration.

This celebration, which is more than 500 years old in the villages of  the Quebrada de Humahuaca , combines the celebration of Carnival (brought by the Spaniards in the conquest) with rituals, own of the region, linked to the Pachamama. The celebration begins in the hills where the devil was sleeping since the previous carnival under an “apacheta”: a mound of stones as an offering. The parsas gather there to dig it up and go down to the villages in their colorful costumes, dancing to the rhythm of traditional music. They are accompanied by musicians with trumpets, rodoubles, trombones and bass drums. Each comparsa carries his devil and walks through the streets carrying the carabia from house to house.

The party runs for nine full days of dances, permits, street parades and invitations to eat and drink in homestays that open their doors for the occasion. It is said that the meaning of this celebration, in the tribes that worshiped the  Pachamama , had to do with the fact that February is a rainy season. The devil is a kind of deity that is reborn with the rains every year and brings with it the growth of crops and the greening of vegetation.

During the week of celebrations there are several rituals such as  Chaya Tuesday  where Pachamama is thanked for the crops and achievements of that year. “Chayar” is to spray with some alcoholic beverage the soil to honor Mother Earth. Today that rite moves to what has been achieved in the year and thus “chayan” cars, or some household appliance that has been purchased for home. A trickle of alcohol is thrown on new things and the Lord's blessing is asked to make the next year even more prosperous.

In the midst of these pagan rituals, celebrations of the Christian religious calendar are also mixed, as followed by Chaya Tuesday comes on  Ash Wednesday . Date that marks the beginning of Lent that precedes  Easter .

At the end of the week of celebrations arrives Temptation Sunday, where everyone returns to the hill to bury the devil and leave their offerings to the Pachamama. It reforms an “Apacheta” under which the dolls worn by each comparsa are buried, and thus

ends the carnival. Masks and costumes are saved, dances are finished and returns to the usual calm.

Most of the year,  Tilcara  is a quiet village. If you want to meet him in its most colorful facet and live an unusual experience, it's going to be better if you visit him in February, before the  devil  is buried again and calm returns to its streets until the following year.