All the streets of the capital entrerriana flow into Parque Urquiza. This is the first indicator that we are facing a special place. 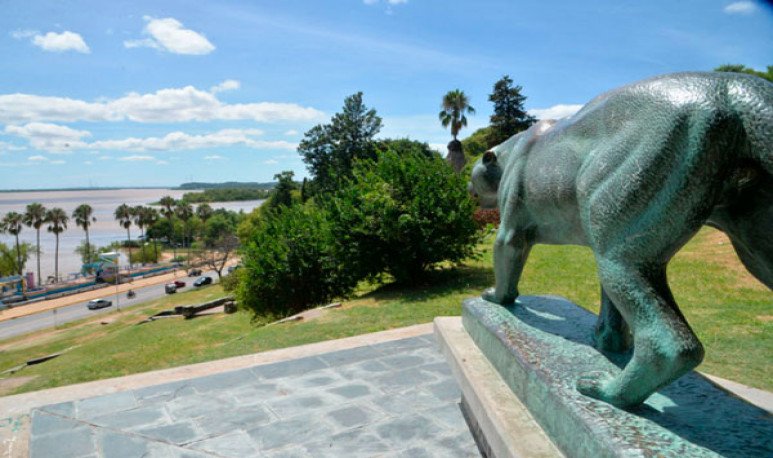 Imposing . That's the main  word  that could describe it. From any of its corners it is possible to visualize the  Paraná River . Its characteristic slopes give us viewpoints with unique sunsets. It is that  Parque Urquiza  is a  symbol  within the town and a home that houses its citizens.

It represents the  favorite place  to go to take math, read books, exercise or stay still. However, his greatest notoriety lies in the fact that he knew how to become, over time, a  meeting place  for people. Thus, along its  ravines  lies the lawn that gives rise to memorable  anecdotes .

Its  history  began to be woven in  1893  when the distribution of  General Urquiza  's inheritance was made known. There, his wife, Dolores Costa, belonged to the land that was called La Batería at that time. In November, the mayor of the city, Don Jaime Baucis, asked the woman to donate the land in order to create a public space.

This request was made by means of a letter explicating that the place would bear the name of the procerer entrerriano. Subsequently, the widow agreed and sent one of her children to negotiate. Over the years, more lots were annexed, some concessioned by neighbors and others bought by the municipality. The result was its current  extension  , which accumulates the total of  44 hectares  .

The  design  was in charge of the French architect  Carlos Thays  and  afforestation  in the hands of gardener  Julio Kumagae  . Among the planted species are silver poplars, garden laurels, bald cypresses, pink laps, jacarandas, drunk sticks and chañares. There are also aromas, oaks, ceibos, willows, cedars, paradises, tipas and pine trees.

A walk of not ending

The property is divided into  three levels : the  Costanera Alta, Medium and Low . The latter are  connected  by numerous stairs, trails and streets through which one can climb or down the ravines. Likewise, the Paraná current can be traveled with the view through  Laurencena Avenue . The same part from Puerto Nuevo to the historic Bajada de Los Vascos .

In the Costanera Baja there is a passage next to Paraná, on which people walk for pleasure or exercise. There, there are  large spaces  with  vegetation  that are used informally for   sports    such as football, rugby and athletics. In addition, in this fragment are also the beaches of the Estudiantes and Rowing clubs, and the municipal spa .

On the Costanera Media there is the amphitheater Héctor Santángelo , a setting where great cultural venues are developed. It was  inaugurated  on December 16,  1985  , with the presence of the trio formed by Lito Vitale, Bernardo Baraj and Lucho González. It has a  capacity  of approximately  2,000 people  and is commonly used to screen films, present works of theatres and perform musical shows.

Finally, we have the Costanera Alta.  It is essentially a  viewpoint on the river , because it is located on top of the surface. Here, you will find  El Rosedal , a place of high turnaround and the most chosen by the locals. On its trails  art  meets  nature  , given that it has several sculptures. Some of them are the Venus Salting Del Baño, restored by Amanda Mayor, and the Liberator's Column, created by Osvaldo Rapetti.

In each fragment of Urquiza Park we will collide with unforgettable sunset  postcards  . Depending on the time of day you visit it, you can observe various contexts. In this regard, in the mornings there will be endless runners who attend before going to work. Then in the evenings you will be invaded with families enjoying sun loungers and sellers offering cotton candy. While in the evenings the youth will take prominence, meeting with loud music and taking advantage of the fresh air. However, every hour you dial the clock will always be a  good time  to go find a  meeting  time.