In Paraná (Entre Ríos), there is a space called Tierra Bomba that can blow your head off with originality. 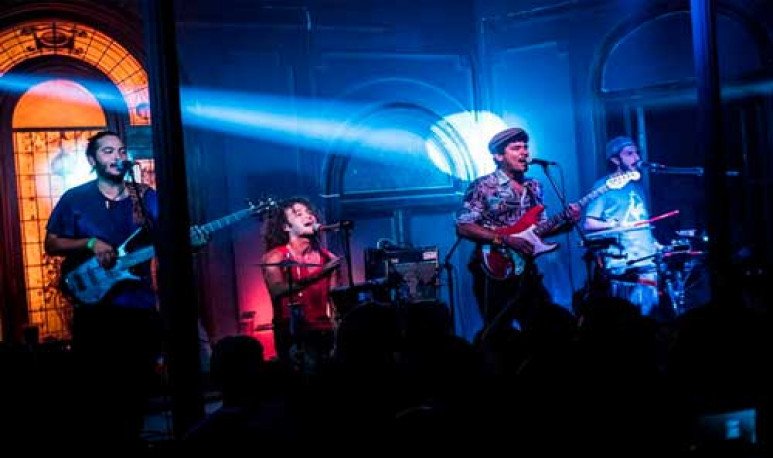 In the  center of the capital of Entrerriana  we find a  house from  the beginning of the  20th century  . In his first appearance, he seems to have nothing in particular. School railings on the sidewalk, a grocery store next door and a drugstore on the next block. Perhaps, people standing in line at the door may even indicate that something is about to begin. Motorists slow down to observe curious and ask what happens. Two large wooden doors are the ones that must be crossed to leave everyday life outside. As soon as you hear the  music  playing, you know that   Tierra Bomba    is inviting you in.

“Aimed at those who are willing to have an authentic experience to feel alive,” they say from their organization. The house is composed of a central space with black and white tiles. There is a  stage,  the protagonist of  countless encounters,  and an imposing stained glass window, which changes colors like a kaleidoscope. On the sides, there are five rooms, of which two serve as beverage bars. In the rest, photo samples, captivating murals and darker corners are distributed for you to choose your own  adventure .

The space  was born in June 2015 , by the hand of  three young Paranaenses who met taking their first steps as musicians. In this way, his artistic interests served as an engine to shape what  initially  functioned as a  traveling rock    . The aim was always to create a home with identity that housed  diversity , celebrations and camaraderie . They made it happen without financial means, no sponsorship. Rebelous and disenchanted with the proposals of that moment, united them with the conviction of defending countercultural movements.

Creativity and freedom forge the personality of Tierra Bomba. Each night is themed and designed according to a particular musical genre. Thus, it includes the possibility of two numbers coming from different cities, blurring geographical boundaries. Even, there are editions that include melodic marathons until dawn, where the number of presentations is expanded.

On the other hand, the courtyard of the house deserves a separate mention. In this we propose a varied gastronomic offer to accompany the dance steps. With open fire cooking, different smoked flavors predominate during recitals. In addition, we work with  entrepreneurs  from the region whose menus vary according to the season.

Self-management as an emblem

When analyzing the factors of the growth of this socio-cultural space, we will discover that there is no secret formula to reveal. It is the will of the organisers and their constant desire to innovate that gives life to the concept they intend to concretize. Over the years, they have been able to remain faithful to their roots based on  independence , musical passion and commitment in the first instance. And rewards come every time they visualize unknown people befriending or enjoying themselves inside their land.